Eve was an untriggered Werewolf who first made an appearance in Bloodletting. She lived in the Bayou with the rest of the werewolves who were exiled from New Orleans by Marcel Gerard.

Eve was a member Crescent Wolf Pack, it is currently unknown which exact bloodline she is descended from.

Little is known of her early life except that while the rest of her family suffered from the Crescent Curse, Eve managed to avoid triggering it. At some point, Eve burned off her birthmark to keep herself safe from those that hunted the Crescent wolves, however she still lived in the Bayou among them. Sometime during her lifetime, she became an experienced midwife.

In Bloodletting, Eve was seen briefly in the Bayou before she became scared and ran away from Hayley and Elijah. Later, she left the Labonair Family bible outside the door of the cabin for Hayley to find. The bible has a list of names and dates of birth of members of the family and the most recent birth was listed as Andréa Labonair, which Hayley realized was herself when she realized they shared the same birthday.

In The River in Reverse, Eve staked Elijah in the back to stop him from choking Hayley to death in the midst of the hallucinations caused by the hybrid bite he sustained from his brother Klaus. Eve informed Hayley that Marcel Gerard had a witch put a curse on the remaining wolves of the Crescent Wolf Clan so that they spent all of their time in their wolf forms except for the night of the full moon, when they would briefly return to their human forms. She told Hayley to keep her birthmark covered, because if a vampire saw it, they would put her in danger.

In Reigning Pain in New Orleans, she deliberately let Elijah and Rebekah find her in the Bayou. She showed them a map and told them that the wolves who grew up in the Bayou can find their way around the swamps easily. However, since rumors of Hayley's pregnancy started to spread among the wolves, members of many different packs have traveled to the Bayou, and they don't know where to hide to keep themselves safe from the vampires, who had been given permission by Klaus to hunt down all the wolves. When they asked her why this should mean anything to them, Eve instructed them to go and see for themselves. This hint led them to Cary and other members of the North East Atlantic Pack, who were descendants of Klaus' biological father, Ansel.

In Le Grand Guignol, she was seen alongside Hayley and the other cursed werewolves of the Bayou Pack. She held a rifle in her hand and helped Hayley threaten Céleste Dubois into giving them information and lifting the curse on their people.

In The Big Uneasy, Eve was first seen showing Hayley the number of werewolves who have come to New Orleans to see her, as they believed that Hayley and her baby would be the ones who could reunite the werewolf clans. Later, she was revealed to have a agreement with Elijah to keep him updated on Hayley's condition and to keep her safe from harm; although she invited him to join them in their festivities, he insisted that the only thing he wants is for Hayley to be happy. He then asked Eve not to tell her that he was there.

In An Unblinking Death, Eve was helping Hayley with some breathing exercises in order to prepare for her upcoming due date. Hayley insisted she would rather give birth in a hospital than the Bayou, but Eve reassured her that werewolves have been giving birth in the Bayou since before she was born.

Later, Eve was severely injured due to the series of explosions that occurred in the Bayou. Her legs were crushed by an overturned camper in the second round of explosions, forcing Elijah and Oliver to work together to free her and begin treating her wounds. When Elijah remarked that Eve wasn't healing, Oliver angrily explained that she hadn't activated her werewolf curse yet, so she didn't have healing abilities. Elijah offered his blood to heal her, but Oliver insisted that Eve would rather die than drink vampire blood.

That evening, Eve woke up to find Oliver sitting at her bedside. She jokingly asked him how she looked, and when he told her she looked fine, she told him he has always been a bad liar. Oliver tried to get Eve to trigger her werewolf gene so she could heal and survive, but Eve clearly did not agree with him and refused to kill, even if it meant saving her life. He then began to rant about how the werewolves were forced to live like animals and that they needed to stop it and that Hayley and Jackson weren't good leaders before making a comment about how they at least now had a common enemy in the vampires.

Suddenly, Eve realized that Oliver had a hand in the bombings that day, which he confirmed by arguing that no one was supposed to get hurt, and he was just trying to motivate the pack to fight back against the vampires. Eve angrily replied that what he did was stupid and reminded him that the pack would kill him when they found out he was involved on the attack on their people. However, Oliver argued that they weren't going to be finding out before he took a pillow off the nearby table and smothered Eve with it to prevent her from exposing him to the others.

At the end of the night, Jackson was seen sitting at her bedside, and was so upset by her loss that he was drinking whiskey out of the bottle. When Hayley walked in, she immediately began crying when she saw Eve's body laying on the bed.

Due to the way she and her pack have been treated, Eve was a strong, independent woman who lived a somewhat reclusive life in the Bayou with the rest of the Bayou Pack. She was very protective of Hayley, even going so far as to attack Elijah, an Original vampire, to defend her. She was devoted to her pack, and helped pregnant women in the clan give birth in the encampments. She also helped Hayley interrogate Celeste in order to break the curse on the Crescents. Eve was very strong-willed and not easily manipulated, as evidenced by the fact that she refused to kill a human in order to trigger her werewolf gene, even to save her from dying from her injuries.

Eve had long, blonde hair and blue eyes. She had a slim build and was shorter than Hayley. She wore mainly light colored clothing, that consisted of green, and wore a black colored jacket. She usually wore her hair up with a single braid, but had occasionally let her hair down. She also had a scar left behind when she burned out her birthmark. 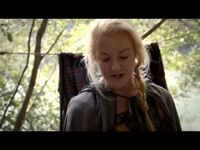 Retrieved from "https://vampirediaries.fandom.com/wiki/Eve?oldid=2780077"
Community content is available under CC-BY-SA unless otherwise noted.