ALICE EVANS ("THE VAMPIRE DIARIES") GUEST STARS IN FLASHBACKS TO THE MIKAELSONS' CHILDHOOD AND SONJA SOHN ("THE WIRE") GUEST STARS AS NEW WITCH LENORE — When Klaus and Elijah receive a cryptic invitation to dinner from their mother Esther, who continues to inhabit the body of Harvest girl Cassie, they find themselves preparing for the worst. With the help of a new witch named Lenore, Klaus, Elijah, and Hayley attempt to stay one step ahead of Esther, but things quickly take an unexpected turn. While Elijah finds himself reluctantly teaming up with Gia, a newly-turned vampire, Hayley is faced with an enticing proposition about her new status as a hybrid after a startling encounter with Esther. Finally, Esther reveals a shocking secret about Klaus' childhood and unveils her ultimate plan for her children.

Klaus and Elijah need a witch. Davina is out of commission, so Marcel instructs Gia to take Elijah to meet his friend Lenore. Lenore agrees to help Elijah with their soul branding spell provided he can get her an enchanted object and a python.

Gia gets python duty while Elijah sends Klaus to Marcel to collect an old family heirloom: a starling necklace—which Esther used to keep Klaus weak while he was growing up, so that he wouldn't kill someone, trigger his werewolf curse, and reveal her infidelity. Marcel, of course, has the necklace sitting on a box on a shelf in his loft from when Klaus had given it to him long ago.

Gia steals a python because Elijah neglected to teach her how to compel.

Immediately after leaving Lenore's shop, Finn, still possessing Vincent, casually walks in and kidnaps the witch. She's chained in the cemetery, where Finn instructs Oliver to persuade/torture the information out of her on what Elijah and Gia wanted from her.

Hayley goes and rescues her, and makes it look like Oliver was jumped, to keep his double-crossing a secret from Esther.

Lenore performs the spell while Esther and Finn have dinner with Klaus and Elijah, but she jumps into Lenore's body.

Klaus: "It's an invitation from our mother."

Hayley to Klaus: "Every good story needs a wicked witch."

Klaus to Esther: "You are the author of everything that I am."

Klaus: "It's an invitation form our mother."

Esther: "Make sure you're ready for them this evening."
Finn: "I have handled everything exactly as you've instructed."

Hayley to Klaus: "Every good story needs a wicked witch."

Klaus to Esther: "You are the author of everything that I am."

Hayley: "Why does she hate you so much, Klaus? She had six kids, it's not like she doesn't have the maternal gene."
Klaus: "Seven, actually. And I think at one time she loved us very much. One died before I was born."
Hayley: "I didn't know that."
Klaus: "Years later my brother, Henrik, was killed by the werewolves in our village. The loss of another child pushed my mother over the edge. So she used her magic to turn us into immortals. I think that's when she loved us the most. But it was her undoing."

Hayley: "So, which restaurant is missing a compelled chef?"
Klaus: "It's certainly a card I've played in the past, but I had no hand in this."
Hayley: "Well, then I guess we have Elijah to thank."
Elijah: "This wasn't my doing."
Hayley: "Then where did this all come from?"

Klaus: "We have enough enemies here, and now the war for our home is to be fought against my own family."

Esther: "Make sure you're ready for them this evening."
Finn: "I have handled everything exactly as you've instructed."

Hayley: "Your wretched mother and her disciples tried to put a carving knife through our baby's heart. I will happily add to the body count."

Esther: "It pains me that you and Elijah look at me with such disdain. I wish that you could see that my every action has been to protect you."

Hayley to Klaus: "Every good story needs a wicked witch. It'll be all the more satisfying when we melt her."

The Originals - Inside Every Mother's Son 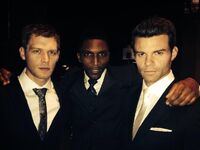 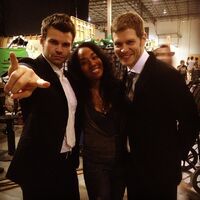 Retrieved from "https://vampirediaries.fandom.com/wiki/Every_Mother%27s_Son?oldid=2785420"
Community content is available under CC-BY-SA unless otherwise noted.