Facing Darkness is Kinda My Thing[2] is the sixteenth episode of the second season of Legacies and the thirty-second episode of the series overall. In the events following the COVID-19 global pandemic, it also serves as the season finale, four episodes earlier than intended.[3][4]

SAVING JOSIE — In a race to save Josie, Hope infiltrates her subconscious and finds herself in a fairytale world filled with dark magic. Back at the Salvatore School, Alaric, Lizzie and the Super Squad commit to their own risky plan to get Josie back despite the potential consequences. Landon, MG, Rafael and Kaleb also appear.[5]

Having resorted to "plan-b", Hope awakens inside of Josie's subconscious, and is confused by what she finds. She follows a trail of bread crumbs before running into a walking, talking pig.

In the real world, the Necromancer is horrified to see that Josie has cleaned up the crypt. She reveals that she cannot feel Lizzie, therefore the Merge was not successful; Josie assumes Hope has some involvement in the whole ordeal. The Necromancer snaps at Josie, citing that Chad and Alyssa are his puppets, however he is soon proven wrong when Josie shows she is able to control him, and remarks that she is in charge. She tasks the Necromancer with finding out what actually happened to Lizzie.

A body double of Lizzie — an illusion spell placed on Hope's body — is seen as Lizzie and MG prepare for Lizzie's funeral. Lizzie remarks that some things about the funeral are not right, but MG tells her that the funeral is not real, just a show for Josie. Lizzie puts on Vardemus' ring which allows her to change her appearance to that of Hope, allowing her to both plan her funeral and go undetected by Josie. MG is shocked by the situation and furthermore, Alaric, Jed and Kaleb question what is going on when they notice the situation unfolding. Despite his initial reluctance, Alaric allows Lizzie to continue her masquerade. Alaric is distracted by Rafael who asks for his help with something.

Back inside Josie's head, the talking pig tells Hope to leave him alone, and stop performing magic. When Hope questions what happens when one performs magic, the pig tells Hope that she wouldn't want to find out. Hope tells the pig that she is not leaving until she finds Josie, however the pig tells her that she is already too late. In a fairytale style — similar to the story Rebekah told Hope about her family — the pig tells Hope of a princess, Josie, who ruled over a kingdom, but eventually became consumed by magic. In order to protect her kingdom, Josie placed a sleeping spell on herself so that she may never practice magic again, therefore limiting the darkness' growth. Despite the story, Hope tells the pig that she must still try, given it is what Josie would do it for her.

Rafael brings Alaric to an undisclosed location where he reveals that he killed Landon under the Necromancer's control. Alaric is certain that Landon will return, however Rafael shows him the golden arrow and remarks that this time is different, much to Alaric's shock.

Hope finds Josie, but is unable to wake her. She casts a spell in order to wake Josie, but is warned by the pig not to continue with magic. Hope remarks that nothing can hurt them inside Josie's subconscious, however is surprised to find a large, werewolf like creature attack the two — the pig remarks that the creature is the darkness, and is capable of hurting them. Hope is able to distract the darkness by throwing a magic-fuelled pebble away from the two.

Back at the Salvatore School, Lizzie talks with two witches, who are deciding whom they should bring to the funeral. Lizzie questions if the two are in mourning, however the two remarks that they are not. When Hope remarks that Lizzie was popular, the girls reveal that everyone was scared of Lizzie and the crazy things she could do; the two of them are glad that they do not have to worry about her outbursts anymore. Nevertheless, the two girls remark that the Necromancer could bring Lizzie back, so she is technically not dead. Lizzie tells MG — who is preparing her eulogy — that nobody cares that she is dead. Nevertheless, MG tells her that the students only got to know one side of Lizzie, and that a eulogy perfectly executed will show them her other side. Lizzie decides that she should be the one to give the eulogy, despite MG's warnings that it is a bad idea.

Kaleb and Jed are filming memorial videos for Lizzie with Wade. Wade has no fond memories of Lizzie and everything he offers seems to be substantially negative. Jed tells Kaleb that they need to find someone who has good memories of Lizzie, however Kaleb remarks that it is not possible — Lizzie has negatively affected almost everyone in the school at least once.

The Necromancer tells Josie that he has been watching the eye all day, and everything seems normal; the students are preparing for Lizzie's funeral. Josie remarks that something is not right, however, therefore it must be an act and his eye must've been discovered. Josie suspects that her father is behind the illusion, therefore the Necromancer should speak with him. Meanwhile, Josie tells the Necromancer that she needs to figure out what is different in her mind.

Alaric and Rafael talk about the current situation with Landon. Rafael blames himself and believes Landon is gone for good. Alaric tells Rafael that it is not his fault and the prophecy must've been wrong. Rafael is unwilling to deal with his mistake and pleads with Alaric to kill him. Alaric instead suggests that they place him under a sleeping spell, but Rafael does not agree and attacks Alaric, before being overcome by the Necromancer, who sarcastically remarks that Rafael tried to warn him.

Lizzie's funeral is attended by the majority of the school, however Alaric does not arrive on time and MG starts the funeral early. He plays the video, which turns out to be a multitude of smaller videos mashed together to make it sound like the students liked Lizzie. MG cuts the video when he realizes that Lizzie is not happy with the production; instead, Kaleb and Jed sing, causing Lizzie to take to the stage prematurely. Lizzie delivers the eulogy, but receives mixed reactions from the crowd, who seem not entirely convinced with the words and begin to laugh.

Hope and the pig arrive at the Huntsman's, where the pig tells Hope that whilst he cannot help her fight the darkness, he can finish the stew and feed her before her fight. When the pig looks in the stew, however, he finds the Huntsman has been made into the meal. The darkness arrives shortly after and attacks Hope and eats the pig. Hope is able to kill the wolf, but is surprised when Josie exits his stomach instead of the pig. Hope is confused, but Josie explains that she was masquerading as the pig in a bit to hide from the darkness and keep Hope safe; she begs that Hope leave in order to stay safe. They are interrupted, however, by dark Josie who enters her own mind having realized Hope is inside.

Lizzie takes off Vardemus' ring in a bid to reveal herself to the funeral gathering, however is stopped when MG begins his eulogy. MG tells everyone about how he got the nickname "MG", and explains that Lizzie tried to change numerous times — once with the shock bracelet, the football games, Miss Mystic Falls — but the students never allowed her to. Lizzie is moved by the whole ordeal as is the audience who are forced to reconsider their actions towards Lizzie.

Josie and Hope talk, with Josie explaining that she can't beat the darkness; she is too powerful. Hope reveals that dark Josie merged with Lizzie, which begins to concern Josie. Hope tries to convince Josie that she can beat dark Josie, but only if she believes in herself. The darkness arrives shortly after and turns Hope to stone. Josie and the darker version of herself talk, with the darkness citing that Josie is weak, and always will be. Josie finally realizes that she was afraid of being powerful as it meant hurting Lizzie — she finally realizes that she can be powerful and good like Hope. With this, she is able to change the narrative and stabs the darkness with the axe. The darkness tells Josie that it will never be over, as long as she has the dark magic inside, she will always be bad.

In the Salvatore Crypt, Lizzie is performing a spell to transfer the dark magic to the Necromancer. Josie and Alaric talk afterwards and Josie thanks Alaric for not giving up on her, even though she deserved it. Alaric tells Josie that she doesn't deserve to be given up on, and Josie tells him to remind her when the "all powerful" Necromancer returns. Josie casts a spell on a coin and when Alaric remarks that he has seen that spell before, Josie tells him that she transferred her siphon power until she is ready for it.

Kaleb and Jed are shocked to find Alyssa returning to the Salvatore School. She tells the two that she is fine, alive and not a zombie, therefore it is clear that the Necromancer held up his end of the bargain. Jed and Kaleb remark that Alyssa doesn't have to be so rude. Lizzie reads a eulogy she has prepared for MG, given he will never be able to hear his eulogy due to his immortality. She thanks MG for always helping her find the light, and for always putting up with her. Lizzie is surprised to see all of the witches who arrive and are glad that she is in fact alive.

Rafael and Alaric are surprised to find that Landon has not returned from death. They question whether the Necromancer held up his end of the bargain, and Rafael remarks that he held up half of the bargain, given his heartbeat has returned. Alaric points Rafael to a different problem, however, citing that Hope has not woken up from her slumber, despite Josie returning.

"It's So Hard To Say Goodbye To Yesterday" – Kaleb and Jed

"It's a Beautiful Life" – Billy Raffoul 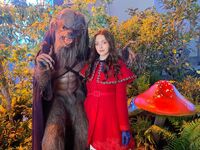 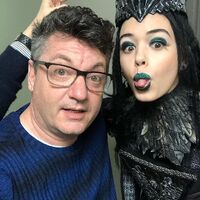 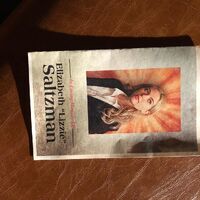 Retrieved from "https://vampirediaries.fandom.com/wiki/Facing_Darkness_is_Kinda_My_Thing?oldid=2785552"
Community content is available under CC-BY-SA unless otherwise noted.