YOU'RE INVITED TO A PARTY TO DIE FOR — Elena asks Stefan to escort her to the town's annual Founders' Party. Vicki gets Tyler to ask her to the party, then accuses him of trying to hide their relationship from his family. Zach reveals a useful family secret to Stefan. At the party, Damon tells Elena a story about the Salvatore family's past leaving Elena with questions that Stefan refuses to answer. At last, Stefan takes action to get Damon out of his life for good.

Text in Bold and Italics are Diary entries/voice overs.

The episode starts with Elena waking up in the middle of the night, she goes down to check if someone's in her house. When she gets down the stairs she goes to the living room where the TV has been turned on, the news is about her being found dead after an "animal attack". Damon then chases her around the house until he attacks her and bites her on the neck. Stefan then wakes up and realize that it was just a dream/nightmare. Damon was actually playing with Stefan's head when he mockingly asks "bad dream?". After deciding to stay in Mystic Falls for awhile, Damon gleefully tells Stefan that the officials have announced the capture of the "animal" responsible for the recent attacks in town.

As Stefan writes an entry in his journal The real animal is still out there. Waiting for me. Challenging me to fight back, to stop him. But how do I stop him without becoming a monster myself. The scene then cuts to Elena's home where Jenna is watching TV, while mocking the reporter, Logan Fell. Logan apparently is the reason why Jenna moved away from Mystic Falls in the past. A dispute occurs between Jeremy and Elena regarding some family antiques, including a pocket watch that Elena polishes for the Founders Council heritage display.

Stefan then arrives at Elena's home. The scene cuts to Elena's room where she and Stefan are hooking up, Stefan's face changes and he backs off. Elena then asks Stefan to escort her to the Founder's Ball. Stefan then says "do they still do that" which makes Elena ask if he's been before. Though he says that the Salvatore's don't get invited anymore. Anyway Stefan then agrees to escort Elena to the ball.

At Caroline's room Damon teases Caroline about "Twilight" and compels her to ask him to accompany her to the Founder's Ball. Caroline asks if the bites will turn her into a vampire, which Damon then explains how one is ‘turned' into a vampire. Vicki is angered by Tyler's indifference displayed towards her when he is with his parents. Bonnie and Caroline arrive at Mystic Grill, Bonnie is worried about Caroline seeing Damon but Caroline assures Bonnie that Damon is safe and that he just has lots of issues with his brother Stefan. Bonnie encourages Caroline to give away the secret that Damon revealed to her about Stefan. After his parents leave the Grill, Tyler repays Vicki by asking her to the Founder's Ball. Jeremy makes the unwelcome remark to Vicki that she had to ask Tyler to ask her to go to the Founder's Ball.

At the Salvatore boarding house, Zach angers Damon by asking why he has returned to Mystic Falls. Damon then chokes Zach but Stefan intervenes between the two, Zach encourages him to get rid of Damon by using vervain on him, which he has secretly been growing in the basement of the boarding house.

Tyler comes to the Gilbert home to retrieve a box of donated items for the heritage display at the Founder's Ball. While helping Elena ready herself for the party, Bonnie shares Caroline's secret, which is that Katherine picked Damon over Stefan and that Stefan did everything to break them up. Although Elena thinks that it's only Damon's side of the story. Back at the boarding house Stefan and Damon prepare for the Founder's Ball. Back to Elena. When Mrs. Lockwood phones to say that the pocket watch was not among the items that Tyler picked up for the display, Elena goes to Jeremy's room and accuses him of taking it. Jeremy then takes it out of its hiding place and claims that its suppose to be his and that it is handed down to the first born son in the Gilbert Family. Back to Stefan. Damon blames Stefan for spiking his Scotch with vervain. On his way out the door, Zach hands Stefan a small vial of vervain, telling him that this time it is twice as strong. Feeling badly, Elena decides to leave the pocket watch on Jeremy's desk.

At the Founder's Ball, Damon and Caroline arrive and so do Elena and Stefan. Caroline confronts her mom. A former boyfriend of Jenna's, Logan Fell, makes an attempt at reconciliation. At the display room the first guest registry where Elena sees Stefan and Damon's name on the list. Just in time Damon walks in and claims that they were the "original Salvatore Brothers, there ancestors". Caroline asks Stefan for a dance, leaving Damon alone with Elena at the Heritage Display.

Damon apologizes for his forward behavior at the game, and explains that the Salvatore brothers are cursed with sibling rivalry. Stefan toasts to Caroline and watches her sip from the glass that he obtained for her. Elena listens as Damon shares the ‘first' Salvatore brothers history involving the woman that they both loved being killed with 26 others inside a church fire, and that the 'first' Salvatore brothers was shot, murdered in cold blood . Insulted at Tyler's refusal to treat her with respect, Vicki leaves the party early. Bonnie alone at a table relights a candle just by staring at it. Elena ask Stefan for a dance. The scene cuts to Jenna and Logan though the conversation was sharp and short. Elena asking about Katherine though he doesn't tell her. Frustrated, Elena leaves Stefan alone on the dance floor.

Carol Lockwood pressures Elena to locate the pocket watch after she makes excuses for its absence. Damon reveals the true motive for attending the Founder's Ball when he retrieves a crystal hidden in a wooden box in the Heritage Display. Logan wins over Jenna when she finally agrees to a date. Bonnie amazes herself when she is able to light every candle in the dining room using her powers. In the comfort room Elena questions Caroline about the bite marks that Damon has left on her body.

Elena threatens Damon to stay away from Caroline. When Elena tells Stefan about the marks, Stefan maintains his secrecy and rushes to deal with Damon. Vicki appears on Jeremy's doorstep and they kiss. Having removed Caroline from view, Damon sinks his teeth into her neck, then collapses on to the grass in pain. Stefan confesses to Damon that he couldn't spike his drink so he spiked Caroline's drink with vervain. After awakening, Caroline grabs the crystal and conceals it within her purse. Elena then comforts Caroline.

As the voice over begins I did what I had to do. To protect Elena. To protect everyone. Yes Damon, the headline reads "Deadly beast captured. All is well in Mystic Falls. Stefan and Zach lock Damon into a cell in the basement of the boardinghouse. Later that evening, the mayor, his wife, Sheriff Forbes, and Logan Fell meet to discuss how to retrieve the pocket watch, saying, "They've come back."

Stefan: "The real animal is still out there. Waiting for me. Challenging me to fight back, to stop him. But how do I stop him without becoming a monster myself?"

Stefan: "I did what I had to do. To protect Elena. To protect everyone. Yes, Damon, the headline reads, "Deadly Beast Captured. All is Well in Mystic Falls."

Damon: "Oh, you know how easy it was to get in your head just now? You really need to get some human blood. It might even the playing field."

Damon: (pulls the knife out of his chest) "Alright, I deserved that."

Damon: "It's all over the news! 'Deadly Beast Captured, All's Well in Mystic Falls.'"

Damon: (about Elena) "Well, the vervain keeps me out of her head. Maybe that's not my target."

Damon: "Believe it or not, Stefan, some girls don't need my persuasion. Some girls just can't resist my good looks, my style, my charm, and my unflinching ability to listen to Taylor Swift."

Elena: "He's cute."
Jenna: "He is not cute. There is nothing cute about him."

Jeremy: "That stuff is Mom and Dad's. You can't just give it away."
Elena: "I'm not giving it away. It's called a loan, Jeremy."

Mayor Lockwood: "Are you sure?"
Sheriff Forbes: "Five bodies, all drained of blood. I'm certain."
Logan: "They've come back." 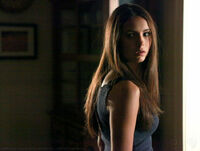 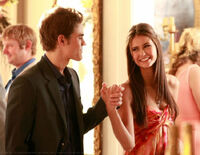 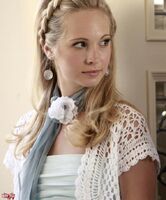