It has been suggested that this article be merged with Finn Mikaelson/Relationships. If you disagree, leave a message here.

Dated, Former Allies, They loved each other; He turned her into a vampire so they could be together forever, Sage never forgot about Finn for the 900 years he was daggered by Klaus, Sage waited for him until he was awakened (but didn't stay celibate for him being she believed in living life to the fullest).

Dated, Former Allies; Ended (They are both dead)

The romantic relationship between the Original Vampire, Finn Mikaelson and the vampire, Sage.

They are referred as "Fage" or "Sinn" by fans.

Finn and Sage were lovers in the 12th century, over one hundred years since Finn and his siblings were turned into the Original vampires and nine hundred years prior to the start of The Vampire Diaries. Their relationship was not approved of by Finn's family, as they believed her to be low-class in comparison to themselves. For this reason, Finn was forced to sneak out to meet up with her, and he ultimately turned Sage into a vampire, despite the self-hatred he held against the species his family created, because he wanted to be with Sage forever, and vice versa.

Not long after Sage was turned, Finn and his other siblings were daggered by the original Brotherhood of the Five, though the dagger didn't work on Klaus. Seeing an opportunity, Klaus chose to keep Finn daggered instead of awakening him like he did his other siblings, as the two brothers did not get along, a decision which left Sage heartbroken and alone. She spent most of the next nine hundred years traveling and waiting for the time that they could be reunited, though, as she later told Finn nearly a millennium later, she did "take care of herself" during this time and had meaningless trysts in the meantime once it became clear Finn wouldn't be reawakened any time soon. When Sage first met Damon Salvatore in 1912, he told her he was spoken for (referring to his love of Katherine Pierce), and Sage replied that they were all spoken for in some way, alluding to the fact that she, too, was waiting for her true love to return.

In Break On Through, Sage returned to Mystic Falls after she heard that Finn had finally been undaggered by Elijah and Damon. However, she then ran into Rebekah, who rudely informed her that Finn left town without telling anyone where he was going. Sage wondered if he went looking for her, but Rebekah stated that Finn had likely forgotten all about her out of anger toward Finn for nearly killing her and the rest of their siblings.

After her run-in with Rebekah, Sage made a deal with Damon which involved helping him obtain information in his quest to kill the rest of the Originals, but only if he spared Finn's life. Upon later discovering that Damon had no intention of doing so, she informed Rebekah of his plan, and the two women sabotaged it at the last moment by burning down the Wickery Bridge, as they knew Damon needed the white oak wood from the underpinnings to kill the Originals. Damon, pretending to be furious in order to keep them from learning about his back-up plan, revealed to Sage that Finn had tried to kill himself in order to help his mother kill the rest of his siblings and insisted that Finn didn't care about her. However, Sage was reluctant to believe that Finn would do such a thing, knowing that they loved each other deeply.

In The Murder of One, Klaus and Rebekah tried to convince Finn not to aid their mother in her plan to kill them by reuniting him with Sage, which ultimately worked-- he gave up his blood willingly so they could unlink themselves before leaving to catch up with Sage. The two took a walk through Mystic Falls and reminisced about their past together while she showed Finn how their hometown had changed since they had met each other. Finn admitted to her that he had assumed she would have moved on in their time apart, but she insisted that though she had taken care of herself in his absence, she never once stopped loving him in all those years.

They then went on a date to the Mystic Grill, where they continued to catch up. Finn was disapproving when Sage admitted to having turned many vampires during the course of her long life due to his self-hatred of vampires, but he didn't stay upset with her, especially after Sage pledged to show him how to live life to the fullest. Stefan spiked the drinks that the two ordered from Matt with vervain in order to lure them outside so he could follow them and try to kill them with the white oak stakes. Sage protected Finn from Stefan, but he was soon staked by Matt and burst into flames while Sage cried. Sage and another vampire she sired, Troy, later confronted Stefan and the rest of the gang at the boarding house with the intention of seeking revenge for Finn's death. However, before she could hurt anyone, Sage and Troy both collapsed and died due to their sireline bond to the now-dead Finn.

Sage: "He's my one true love. He turned me so that we could be together forever. Then Klaus daggered him and locked him away, and I've been waiting ever since."

Sage: "This statue was built where we used to rendezvous. Back when you used to have to sneak away from your siblings to see your tawdry lady friend."
Finn: "I assumed after nine hundred years you'd moved on..."
Sage: "I took care of myself. But, I never stopped loving you, Finn... I don't want you to die."
Finn: "How many people have you turned?"
Sage: "I don’t know. A lot. Don’t judge me, Finn, you turned me."
Finn: "Exactly, Sage. I turned you. My passion overtook my morals."
Sage: "My passions overtake my morals on a daily basis. It’s called living life to the fullest. To living life to the fullest?"
Finn: "To living life!"

-- The Murder of One 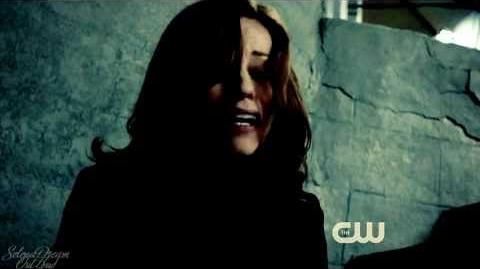 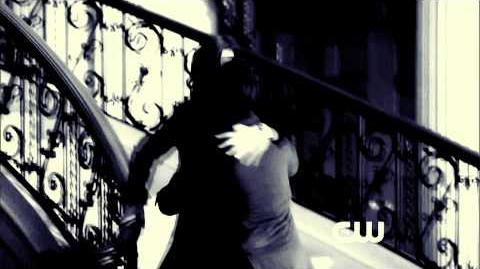 ● Finn&Sage angeles on the moon

Retrieved from "https://vampirediaries.fandom.com/wiki/Finn_and_Sage?oldid=2630662"
Community content is available under CC-BY-SA unless otherwise noted.