The members of the Founders' Council met to discuss vampires here, at least when John Gilbert came back into town. They rang the official charter bell and started the countdown for the 150th Founders' Day Celebration.

John Gilbert was killed here by Damon, but came back to life because of his ring. John revealed to Damon and Alaric that he knew a lot of information about them and the Vampire's Tomb which he learned from Johnathan Gilbert's journals. Tyler and Kelly Donovan started talking and later made out, but they were caught by Kelly's son, Matt. Matt punched Tyler and Matt got beat up pretty bad which caused a short term rift in their friendship.

Stefan was still being tempted by blood during both events here, and was mesmerized by Kelly Donovan's blood on her forehead. He exited the building and tasted it. He was also seen to start compelling people because of his influence under human blood. In a later episode, while the Miss Mystic Falls pageant was going on, Stefan was still tempted by human blood and bit Amber Bradley, one of the contestants. He later was stopped by Bonnie who used her powers and it eliminated his bloodlust for the most part.

The second pageant was organized in November 2010 nine months from the previous one. This is where the Mystic Falls Gang realizes Elena and Damon have developed a sire bond.

The third pageant was organized in 2018. Sybil, Damon and Stefan came to find the bell. The pageant was cut short due to "a gas leak". Caroline tried to compel the contestants to go home, but they were already compelled by Stefan, "the honorary judge". Damon knocked Sybil down and later trapped her in the cells of the Salvatore Boarding House. Meanwhile Stefan turned Violet Fell into a vampire. 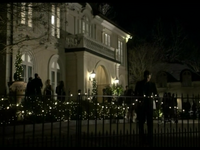 Retrieved from "https://vampirediaries.fandom.com/wiki/Founders%27_Hall?oldid=2766998"
Community content is available under CC-BY-SA unless otherwise noted.