Francesca Guerrera (formerly Correa) was the owner of the Palace Royale casino, a dedicated philanthropist, the matriarch of a sizable drug trafficking empire throughout New Orleans, and actually a member of the formerly believed to be extinct Guerrera Werewolf Family. When Father Kieran's mental status began to deteriorate after being hexed by the French Quarter witch coven, Francesca replaced him as the Faction representative for the humans of New Orleans. Upon becoming Faction representative, her first goal was to become an ally of Elijah Mikaelson, who named himself leader of New Orleans after his brother Klaus became disinterested in the role. Francesca, along with Elijah (representing the Originals), Genevieve (representing the witches), Hayley Marshall (representing the werewolves) and Diego (representing the vampires) signed a treaty to ensure peace between all supernatural creatures in the city. In The Battle of New Orleans, it's revealed that Francesca, as well as the rest of her family, are werewolves from the Guerrera werewolf bloodline, who have been pretending to be human.

Francesca was a member of the Guerrera Family.

Little is known of her early life.

In Moon Over Bourbon Street, Francesca saw an opportunity after learning that Father Kieran was hexed and slowly losing his mind, so she went to Rousseau's in order to introduce herself to Elijah Mikaelson in order to gain his support in her bid to replace Kieran as the human representative in the Faction. When Elijah made clear he knew of her business, including her ownership of the Palace Royale casino, her involvement in various philanthropic organizations, and her role as matriarch of a drug cartel, she suggested to him that if he didn't support her, she and her "less civilized brethren" would make life difficult for him.

Francesca later came to Elijah's party at The Abattoir at his invitation. Elijah noticed that Jackson, a werewolf, might be involved in trouble at the party, he tried to follow him, but Francesca distracts him by fishing for compliments in an effort to win him over. She informs him that she has already settled the dispute over the docks by pacifying the witches with an increased share in cemetery tours and giving the Crescent wolf clan a "Welcome Back to Humanity gift" in the form of $100 chips to her casino. Elijah agrees that in light of Kieran's deteriorating condition, the others have acquiesced to her proposal, making her the new official representative of the Human Faction until Kieran's ready to resume his duties. She is later seen with Diego, who mocks a werewolf named Oliver. Francesca attempts to disuade the two from fighting each other by trying to get them to fight over her, instead, but her efforts do nothing to quell the tension.

Later that night, Elijah Mikaelson, Francesca Correa, Genevieve, Hayley Marshall and Diego make a peace treaty between the five factions of New Orleans' supernatural community - the Original vampires, the humans, the witches, the werewolves, and the vampires.

In The Big Uneasy, Elijah is talking to her and asks her to attend the witches' celebration and she agrees since she thinks that since the treaty is in order, she should make an appearance. She is seen during the parade and later leaves when the vampires go into a frenzy.

In A Closer Walk With Thee, she is seen confronting Cami at Rousseau's regarding Father Kieran's key. Cami informs her that she has no idea where the key is before storming out. Francesca is later seen walking with the large crowd that attended Father Kieran's funeral and the procession afterward, where she feigned sadness while pretending to dab tears from her face.

In The Battle of New Orleans, Francesca returns to Rousseau's to inform Cami that she has bought the restaurant, since it had begun having financial difficulties after Sophie's death. Once again, she asks for Father Kieran's key. When Cami maintains that she doesn't have the key, nor does she know where it is, Francesca tells Cami that her family has been in New Orleans for a long time, longer than hers, and gives Cami one day to find the key for her before she turns to more "not-friendly" means of persuasion. When Klaus' plan to obtain the black hyanite stones necessary for the moonlight ring spell, Francesca and her brothers came through at the last minute with a small amount, and was happy to offer the stones over without negotiation. She informed Klaus of how vindictive Marcel had recently become, and offered to join Klaus' side in order to form a united front against Marcel and his vampire army. Later, when Genevieve is performing the spell, Francesca and Hayley stay with her to ensure that Genevieve was protected from the vampires, as well as to make sure she didn't double-cross them. Once the spell is completed, it is revealed that Francesca is an untriggered Guerrera werewolf, who has been working with Genevieve behind everyone's back the entire time in order to make moonlight rings for her family, rather than the Crescent wolves. She purposely waited until she was in possession of a moonlight stone before she triggered her werewolf curse by killing a member of her security team. Marcel, having heard of Klaus' plan to make moonlight rings, and knowing that the rings would result in the end of vampires, rounded up his vampire army to attack the Mikaelson compound and kill the witch performing the spell. Unfortunately, they were too late, and because Francesca and her brothers had their moonlight stones, they were able to control their transformation to bite every single vampire, leaving them all dead or dying from their werewolf venom.

In From a Cradle to a Grave, she gives a speech about the fallen citizens on Rue Dumaine in the French Quarter. In her speech, it was alluded that the Battle of New Orleans that occurred between the Mikaelsons, the vampires, and the Guerrera-Correa werewolves was being covered up, and the casualties of the battle were all blamed on "gang violence". Marcel also insinuated that Francesca intended on making the French Quarter a vampire-free neighborhood, presumably as payback for Marcel doing the same to the werewolves for decades.

In Rebirth, she has made an alliance with Esther, whom she incorrectly believed to be Cassie to make more of the Moonlight Rings. However, she is unaware that Esther does not have her best interests in mind, and indeed, did not seem to care whether she lived or died. Months of inaction have taken their toll on Francesca's sanity, causing her to make multiple poor decisions, allowing Klaus, Elijah, Hayley along with an few of their vampire allies take down those who already have the rings on them. Elijah kills all of her brothers and lets her escape, so Hayley would deal with her. Hayley kills her, but states that's not enough because she needs her daughter back.

Francesca's shown to be very witty and charming, but she also had proven to have a cold, dark, calculating, menacing and dangerous personality. She was also very flirtatious, and loves attention from males and others. Francesca, however, was, at her core, greedy. Her main desire is to see the success of her business and her species, and she's willing to make deals and alliance with whomever she deems to be the winning team in order to ensure that she gets what she wants. She doesn't care who she hurts or what the costs were, as long as she gets what she wants. This can be shown with the moonlight rings, where she tricked Klaus, Elijah, and Hayley, almost got Hayley and Hope killed in the process.

She is very manipulative and a skilled liar, as demonstrated by the way that she manipulates and lies to Elijah and Klaus, and the fact that she tricked everyone into believing she and her family were human. She was also a savvy politician who has been known to spin a great speech, a skill which had helped her advance through the ranks of the Human Faction. However, once her werewolf side activates, she begins to exhibit several qualities of her werewolf family. She becomes anxious for the hunt, a fact that Klaus and Elijah use against her. Months of inactivity take their toll on Francesca, causing several slips that contribute to the eradication of her pack.

Francesca was a beautiful woman of high class. She had a slim physique, had olive colored skin, long straight brown hair that tickles her shoulders and brown eyes. She was also a tall woman, 5'8 in height. She was seen wearing women's suits, heels, and always classy outfits. She was seen wearing expensive jewelry. Like most werewolves, when she is in her wolf form her eyes turn gold and she has fangs. The veins under her eyes swell, and she looks mildly different.

Francesca possessed all the standard powers and abilities of a non evolved-werewolf.

Francesca had the typical weaknesses of a non evolved-werewolf. 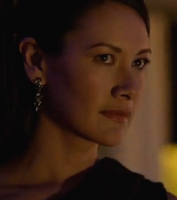 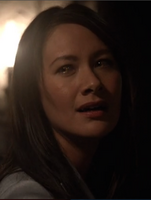 Retrieved from "https://vampirediaries.fandom.com/wiki/Francesca_Guerrera?oldid=2767000"
Community content is available under CC-BY-SA unless otherwise noted.