THE ORIGINALS MOTHER AND CHILD IN PERIL — As the baby's due date draws near, Klaus and Elijah embark on a search for Hayley, while Hayley herself is determined to do whatever it takes to keep her unborn baby safe and away from the witches. Francesca takes a meeting with Oliver and Jackson to determine the future of the werewolves in New Orleans. In the aftermath of a surprising attack on Marcel and his vampires at the compound, Davina and Camille join resources to take down Klaus. Finally, in a desperate move to protect those most important to him, Klaus makes a heartbreaking decision.

The episode begins in a dream-like state. A heavily pregnant Hayley is in the nursery, in a rocking chair. She's writing a letter. Klaus comes in, and they have a friendly conversation; Klaus teases her about whom she's writing to—Jackson, Elijah, or even him. Hayley lets Klaus feel the baby kick in her womb, and they both smile. Klaus lets Hayley get back to her letter.

The letter is addressed to their daughter.

In a voiceover, we hear Hayley's letter, while we see what's going on at the church. Hayley is in labor, futilely fighting off the witches and swearing at them. Klaus barges in, beheads one of them. Monique and Abigail use their magic to fling Klaus onto the wall, where he sticks to while watching them deliver his and Hayley's daughter.

Davina comes to the compound, where she finds Marcel and Camille. She asks him where they fought, and she goes to the location. She starts chanting.

As Klaus screams that he will kill the witches and bathe in their blood, Hayley gives one last push. They see their daughter, and Hayley asks to hold her. Hayley's throat is slit from behind just as she's gotten to hold her daughter. Klaus screams. Monique snaps his neck with magic, as they walk out of the church to sacrifice the baby for their own benefits.

Davina brings a cup of Klaus' blood from his and Marcel's fight. It's only enough for one, however. Davina refuses to choose, so Marcel gives it to Josh.

Marcel leaves to get Klaus' blood and save as many of his men as he can. Camille tells him he'll need a weapon, and she happens to have an arsenal.

Elijah asks how it happened, and Klaus says he was bested. Elijah raises his voice, angry. "My invincible brother?"

Klaus says they took the baby, but there's still time to save her. They look through the cemetery, but they can't find anyone. Elijah says the witches are not there and they're wasting time. Klaus notices a statue they've passed three times, and Elijah figures they fabricated an illusion. Klaus whooshes up to higher ground, and sees an endless horizon of the cemetery.

Camille shows Marcel and Davina the secret room. They take the Devil's Star—an object which one throw can make a thousand cuts.

At the cemetery, where it is now morning, Elijah is angry with Klaus. His only focus is on the baby and her safety, and says the world they're living in now is due to Klaus—all his scheming, and the enemies he's made every single day. He asks Klaus what he expected, if the baby would grow up to live in a happy world where her mother was alive and they all lived as a sort of family.

Klaus tells him that was Elijah's fantasy, but Elijah refuses to listen. It was their hope, the whole family's hope. Elijah breaks down to Klaus that he let Hayley in—he doesn't let people in. He let her in, he needed her, and Klaus took her from him. He says Klaus has broken him.

Klaus tells Elijah that he can tell his niece how much he cared for Hayley, when they save her.

At the church, Hayley wakes up in transition. She remembers the labor, her baby, Klaus helplessly watching, her throat being slit. She leaves in search of him.

At the cemetery, Genevieve lays the baby down in preparation for the sacrifice. When Genevieve leaves, Abigail assures Monique that she'll go through with it, because the Ancestors promised Genevieve her life. Monique asks about the Ancestors promises to them. The fourth Harvest girl was supposed to be resurrected. She is unwilling to accept that Genevieve's friends hijack that resurrection while their own friend has to stay dead.

Monique hopes Genevieve doesn't go through with it, so that she'll be dragged to where she came from, allowing the Ancestors to return their friend.

Davina has to draw power from a nexus vorti—a rare occurrence, something so infrequent that it's almost a miracle.

While the witches are chanting in the cemetery, Davina does her own chanting to bring Mikael back.

Elijah and Klaus are still trying to find their way through the maze. Hayley finds them. Elijah asks how this is possible, and she tells them of her hunger.

She also feels her daughter, like she's drawn to her.

Klaus realizes she's in transition, as she died with the baby's blood in her system. She has to drink from her daughter if she is to survive.

Hayley doesn't care about herself, though. She just wants to find her daughter.

Just as Genevieve is about to stab the baby, Klaus throws an object towards her, stopping the murder.

Monique and Abigail throw them back with the power of all the witches in the Ancestral Plane.

Mikael comes back, and he feeds on Diego.

Klaus throws a part of the metal fence into Abigail, killing her. Monique takes the knife that was supposed to be for the sacrifice, but Marcel comes and uses the Devil's Star on her.

Marcel takes the baby to the compound. Klaus finds him there. He heals Marcel, and holds his daughter. Mikael watches them from inside the compound, holding the White Oak Stake.

He rests her in the nursery, as Mikael quietly comes after him. But, he is unable to go any further. Davina is behind him. She has control over him, and she brings him to the attic of the church.

She brought him back to punish Klaus, but not yet. She added a bracelet to the spell, linking them together. Just as she was used as a secret weapon, now Mikael is too.

Elijah shackles Genevieve in the cemetery. She claims the Ancestors left her no choice, but Hayley retorts that Genevieve was willing to sacrifice an innocent baby for more power.

Genevieve's eyes start bleeding out, as she failed in her duty. She asks them to tell Klaus that she's sorry. Hayley stabs her, saying that she's not sorry for Genevieve.

Hayley is now in the nursery, holding her daughter. Klaus says they should've known it was Esther, that not even death can stop her. And now Esther has control over the New Orleans witches.

Hayley suggests there's a third option. She talks of how she was born in a war zone; her parents thought they could protect her, but they were slaughtered, leaving her to grow up alone and unloved.

Now on her daughter's first day in the world, she has a grandmother bent on sacrificing her, and a mother who has to drink the blood of her own baby to survive the transition.

She made a promise that her daughter would not grow up the way she did, so the third option is to send her away while they stay behind and clean up the mess that they made.

Klaus suggests that no one knows their daughter has lived on. Whatever it takes to save their family.

Outside in the city, Francesca Correa talks to the citizens and says it's a new day in the Quarter. She will work to help citizens recover from the outbreak of gang violence (the fight among the vampires and werewolves the previous night) and rid the city of the elements that mean them harm.

Marcel wants to make a deal with Oliver. Oliver says Klaus will side with the werewolves whom he helped make stronger, but Marcel uses leverage against the wolf pack—the remains of a mutilated baby. He suggests Oliver cremate it, before Klaus smells it on him.

Camille sees people putting flowers for those who died in the "gang" violence, stopping at "Baby Mikaelson." She goes to see Klaus, who tells her that the baby died a few hours after the Guerrera attack. She claims it's all her fault, if only she hadn't hesitated and uncovered the Francesca's plot in time to stop it. Klaus asks how she'd have stopped the witches in league with Francesca. He blames himself.

Klaus says they can't be friends, because everything he finds beautiful will be ruined from the demons that haunt and torment him.

She leaves, in tears.

Klaus tells Elijah that Marcel managed to find a stillborn baby in a hospital. Marcel has agreed to allow Klaus to compel him to forget what he knows about the Mikaelson baby, in exchange for vials of Klaus' blood.

They have to sell it properly if the witches are to believe that the baby is actually dead. So, they grieve in public, to the place held for all those who died. Their grief, however, is real, because they have to send the baby away.

Klaus hands his daughter to Rebekah. She will need a witch to perform a cloaking spell to keep her safe. He promises his daughter she will return to him. Rebekah asks for her. "Her name is Hope."

At the cemetery, Cassie, the fourth Harvest girl, is back from the dead. A man follows her to a grave. She asks him where the fun is in wishing someone a "May you rest in peace." Ordering him to come along, he answers, "Yes, Mother."

And then Esther's tombstone is shown.

Marcel: "So, this is what Kieran was hiding."
Cami: "More like stockpiling. From what I can gather, it's mostly weapons."
Davina: "Dark objects--created by witches."
Marcel: "And co-opted by the humans."
Marcel: "Kieran's been keeping this a secret for years. You really sure you wanna show me all this?"
Cami: "You said knowing my uncle's secrets could get me killed? But, what if those same secrets could save the lives of my friends?"
Davina: "Look at this! I learned about it in the Lycée, it's called The Devil's Star. They say one throw can make a thousand cuts."
Marcel: "A thousand cuts sounds about right. I need to make Klaus bleed." 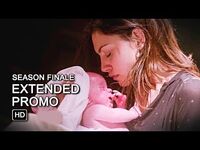 The Originals - From a Cradle to a Grave Clip
Webclip 2 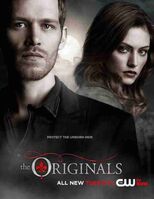 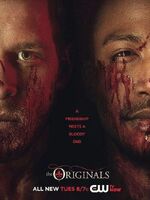 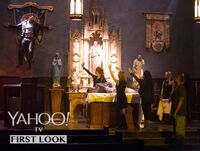 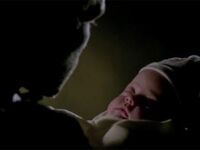 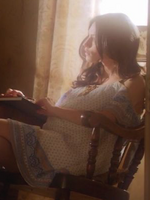 Retrieved from "https://vampirediaries.fandom.com/wiki/From_a_Cradle_to_a_Grave?oldid=2785419"
Community content is available under CC-BY-SA unless otherwise noted.