Gaspar Cortez was a character on The Originals. He debuted in fifteenth episode of the third season. He was a vampire from Klaus' sireline and held a personal grudge against for what he did to his family. He was a former warlord who had decimated Belaga with his father and five older brothers. Klaus killed his family and Gaspar became hell bent on seeking vengeance against him.

Gaspar, his father and five older brothers were warlords back in the 1600s. According to Klaus, Gaspar and his family burned Belaga, Sarawak, Klaus' favorite artistic retreat to the ground. In return, he murdered his father, brothers and the mistress. After this action, Gaspar became a vampire hell-bent on revenge against Klaus.

In An Old Friend Calls, he is seen across the street smirking at Klaus and when a car goes by, he disappears out of sight. Afterwards, he compels an unknown man to give Vincent a note to meet him at Rousseau's. He is then later seen coming out of a limo and orders the driver to burn it and the victims he had just fed on. He then walks away as the limo and the people go up in flames. He is seen eating at Rousseau's and it's noticeable that everyone is quiet and no one is paying attention to what is going on. When Vincent threatens him, Cortez reveals he compelled everyone and if something were to happen, he has other people compelled to kill the patrons. He orders Vincent to do a spell to find the last remaining White Oak and each time the Ancestors refuse to show Vincent. Cortez orders him to keep trying and Camille shows up. Cortez takes notice that she's a vampire and he then incapacitates her by knocking her out on the wall. He and Klaus then face off, with Cortez ending up having a stake thrown through his chest. After Cami and Vincent are gone, Klaus pulls the stake out of Cortez and pushes him against the bar. He then asks him how he knows about the White Oak and Cortez tells him that there's no shortage of vampires that loathe him, and that they've found ways of keeping connected, to which Cortez holds up his phone and says "Stronger and instantaneous", while dropping the phone.

He tells him that it started as a rumor on a private message board and that he has confirmed the truth. He tells Klaus his sired are coming and they will destroy everything he loves, and then they will kill him with the White Oak, giving him the retribution he deserves, to which Klaus then decapitates Cortez. Later on, the murders of the Strix members are blamed on Cortez as he had a previous run in with them at the start of the sireline war.

When first introduced, Cortez was shown to have no regard for human life, using them as mere tools to accomplish his actions and intentions. He was also quite forceful and assertive, as shown when he kept on pressuring Vincent to locate the weapon he seeks even though signs of exhaustion were evident. Because of his experience with Klaus Mikaelson in the past, he, just like many others, was vengeful and wanted Klaus to be condemned for his violent actions and murders. Klaus described him as a cunning deviant that has been known to compel hoards of people to aid him with his tasks.

He was a man who appeared to be in his late 30's to early 40's. He looks to be of Spanish descent with short black hair and dark brown eyes.

Gaspar possessed all the standard powers and abilities of a non-Original vampire.

Gaspar had the typical weaknesses of a non-Original vampire. 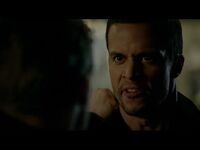 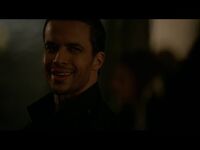 Retrieved from "https://vampirediaries.fandom.com/wiki/Gaspar_Cortez?oldid=2780683"
Community content is available under CC-BY-SA unless otherwise noted.