A Ghost, or Veiled Matter, was the soul of a deceased supernatural person that could, under certain circumstances, appear as a visible manifestation to the living from the Other Side. In even rarer circumstances, ghosts could physically interact with the living world. However, following the destruction of the Other Side in Home, the term is defunct.

Souls of supernatural beings can continue to linger for an indeterminate amount of time as spirits in the Space In-between until they find peace or move on to another afterlife.

Ghosts do not appear any different dead than they did when they were alive. Whenever they appear to the living, they are usually seen dressed in the very same attire they were wearing at the time of their deaths. However, it's possible that ghosts can somehow change their appearance and manifest different clothing; Bonnie Bennett, Vicki Donovan and Lexi Branson were shown wearing different clothing on the Other Side than the outfits they originally died in.

Main article: the Other Side

The Other Side was the mysterious dimension where the souls of dead supernatural beings reside. It was created by Qetsiyah in an attempt to imprison the immortal Silas. The spell ensured that every supernatural being that died would go to the Other Side, instead of the peaceful afterlife. While ghosts on the Other Side could, during moments where the Veil was down, manifest themselves and were able to interact with the living world, either to cause harm or to help. 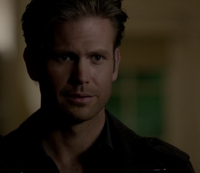 Damon talking to Ric on his graveyard.