Giuseppe Salvatore was the abusive father of Damon, Stefan and an unknown Salvatore and the abusive husband of Lillian Salvatore. He, along with other members of the Founder's Council, helped in trapping twenty-six vampires in a church cellar to be burned to death, but they were saved by Emily Bennett in 1864.

Giuseppe was born on October 9, 1810, presumably in the United States. At some point before the 1840's, he met and married a woman named Lily who gave him two sons, Damon and Stefan.

As a young man, Giuseppe was seen often drunk and not himself. Giuseppe often took control of his wife Lily and did not allow her things such as money etc. When Damon was a boy, Giuseppe once punished him by burning him with a cigar as a result of stealing money from him, which he didn't actually steal.

After his wife supposedly died of tuberculosis, Giuseppe was left to raise his sons on his own but proved to be a biased parent. He was always disappointed with his older son, Damon, with whom he never saw eye-to-eye, as he believed Damon was irresponsible and lacked any sense of direction. However, he was very close to his younger son, Stefan, whom he believed to be responsible, studious, and dutiful, and as such, he regarded Stefan as his favorite child. This unsurprisingly contributed to Damon's existing resentment of his seemingly always-favored younger brother.

When he uncovered the existence of vampires in Mystic Falls, along with others in the town, he grew to hate them with an undying passion, believing them to be utter monsters that must to be eliminated at all costs. Along the other Founding families, they created the Town Council with a mission to kill the vampires in Mystic Falls. When Stefan told him that he didn't think all vampires are evil, Giuseppe grew suspicious of Stefan's liaison with Katherine. Giuseppe spiked Stefan's drink with vervain in order to expose and eventually to catch Katherine Pierce, Stefan's vampire lover, which ended up happening that night when they were having a romantic rendezvous in Stefan's bedroom. Upon having his suspicions confirmed, he ordered Stefan to get the other Council members to come take Katherine away. Giuseppe ultimately shot his own sons when they both tried to rescue Katherine from being locked in the tomb with the other twenty-six vampires. However, unbeknownst to him, both brothers had Katherine's blood in their systems, and they woke hours later in transition to become vampires.

A night later, he was visited by Stefan, whom he thought was dead after he pulled the trigger on him and Damon. Stefan discovers that his father was the one responsible for shooting both him and Damon after they helped to rescue Katherine, but Giuseppe argued that he'd rather have his sons be dead than be traitors to their cause. He then described how shocked and appalled that he was about Stefan becoming a vampire, but Stefan insisted that he wasn't officially a vampire yet, and he was planning to die rather than complete his transition. After rejecting his son for siding with the vampires, he tried to stake him with a wooden stake that he broke off himself, but he was thrown aside with the impact of Stefan's unexpected vampire strength, and accidentally stabbed himself in the abdomen with the stake when he fell to the floor. Stefan apologized and tried to help him, but the wound was too severe. Stefan was soon overcome with longing for the blood pouring out of his father's wound, due to his body urging him to complete his transition into a vampire. Giuseppe looked at his son with revulsion as Stefan licked his bloody fingers, completing his transition and transforming his eyes and fangs to that of a vampire. Giuseppe then died from blood loss due to his mortal wound.

In Children of the Damned, when Stefan and Elena were looking for Emily Bennett's grimoire, Stefan recalled that his father always said he would take his secrets with him to the grave. From there, Stefan realized that the grimoire was buried in his father's grave, as Johnathan Gilbert had given it to him to protect it.

Giuseppe raised both of his sons on his own after his wife died. But proved to be a biased parent; he was shown to be very disappointed in his eldest son Damon Salvatore, and they didn't seem to see eye to eye because, out of arrogance, he believed that Damon was irresponsible and lacks any sense of direction, especially after Damon deserted the Confederate Army. However, he was very close with his younger son, Stefan Salvatore and Stefan was also Giuseppe's favorite son. Giuseppe admired Stefan and he believed Stefan was responsible, studious and displayed a sense of duty.

When he saw that his sons were trying to rescue Katherine after she had been captured, he decided to shoot and kill them to spare himself the embarrassment of having vampire-sympathizers for children, he had no guilt or remorse for this vile act of his, proving that not only was he a horrible person in the end, but he was also a hypocrite, claiming that vampires are evil monsters when himself was actually the evil monster.

Giuseppe was both shocked and appalled to learn that Stefan had come back to life as a vampire, and even when Stefan assured him that he had no intention of completing his transition and was planning to die, Giuseppe still tried to kill him to ensure that wasn't the case. However, Stefan inadvertently threw his father into a wall, causing him to accidentally stab himself with his own stake, when he reflexively defended himself, not having full control over his new abilities. Giuseppe's hatred of vampires continued on until his death, as he watched his son with intense revulsion as he fed on his blood and completed his transition.

As seen in flashbacks, Giuseppe was both an abusive husband and father, when Damon was 12 years old, Giuseppe once punished him by burning him with a cigar as a result of stealing money from him, which he didn't actually steal, it was actually Lily, however, Damon took the blame because he was afraid of what Giuseppe may do to Stefan.

Giuseppe was a man with a tall stature and medium build, wearing fine suits of his time. He had blue eyes and brown hair with some gray and white streaks.

When he was younger, he wore a black suit, black tie and a white shirt underneath. He had dark brown facial hair, with a beard and mustache. His hair was more dark brown and wavy around this time as well.

Giuseppe was Damon's father. Not much is known about the relationship, however, based on flashbacks and what has been mentioned, Damon never had a good relationship with Giuseppe, because he was physically abusive towards his son for no apparent reason, as a child Damon was terrified of his father. When he was 12 years old, Giuseppe demanded to know who took his money from him, Damon took the blame (for something he didn't do) because he was afraid of what Giuseppe may do to Stefan, as punishment stealing money from him, he burned his son with a cigar, he presumably continue to abuse his son until he was an adult.

As an adult, Damon was no longer terrified of father, to the point where he openly disrespects him, when he saw that his son Damon, along with Stefan, was trying to rescue Katherine after she had been captured, he decided to shoot and kill him to spare himself the embarrassment of having vampire-sympathizer for a son, he had no guilt or remorse for this vile act of his, it can be assumed that Damon now despises Giuseppe for what he did to him, after learning that his own father was his killer, it is likely that he did not mourn or grieve over his death after Giuseppe was killed by Stefan.

In the present day, Damon rarely speaks about his father, when he does speak about him; it is in a negative way, and he (correctly) believes him to be nothing more than a monster.

He spoke Latin, Italian, and English. He took Stefan to the Town Council meetings in Johnathan Gilbert's attic. He poisoned Stefan's drink with vervain when he suspected Katherine was a vampire. He shot both Stefan and Damon. Stefan went to see his father when he woke and when Giuseppe tried to stake Stefan, accidentally staked himself and refused blood from Stefan. He is last mentioned being buried next to his dead wife at a service which portrayed him as a hero for ridding the town of evil, and it was said at his funeral that if a picture could be painted of him, it would be of him and his two sons, who were known as heroes in the Battle of Willow Creek. This illustrated that Giuseppe succeeded in covering up his son's deaths, keeping the secret of what they were out of the history books.

In the books, Giuseppe is shown to be rather strict and stern. He is a nobleman who strongly believes in a sense of duty and responsibility. He and his son Damon never got along because of Damon's lack of responsibility. While attending the unnamed "university," Damon allegedly engaged in gambling, jousting, and womanizing instead of studying. His father said Damon would be failing every class if it were not for his tutors and his secretary. He blamed Damon for wasting his time and Giuseppe's money and suggested that Damon wanted to leave to return to his hunting and hawking. Giuseppe also suggested that for Damon to leave the university will embarrass Giuseppe because his friends will believe he has a son who is a ne'er-do-well coward and an idler who makes no useful contribution to the city. On the contrary, Giuseppe seemed to strongly favor his younger son, Stefan, because he believed that Stefan displayed the traits of responsibility and duty and was a good son.

Giuseppe was a character that we only meet through Stefan's flashbacks. He was obviously a proud and noble aristocrat who works for the benefit of Florence and expected the same from both of his sons. From the one flashback where Damon has told his family of his intent not to return to University, we can see that the relationship between father and son is extremely strained and tense, and has been for quite some time. Giuseppe seemed to be at the end of his patience with his eldest son, and Damon gave his father very little love or respect. Due to the time, we can assume that Giuseppe left the care of his sons up to nurses and servants, meaning that the pair would never have been close, and perhaps the death of their mother during their early childhood would not have helped. The impact of Stefan's presence on the relationship between Damon and Giuseppe would have been highly important. Stefan seemed to be prepared to follow in his father's footsteps of duty and responsibility, being the counter and complete opposite of Damon, someone who will achieve what he would not. Damon may have felt that his father cared much more for his younger brother than him.

In the novel's flashbacks, he also tried to desperately stop his sons from killing one another, showing he may have cared some for them. 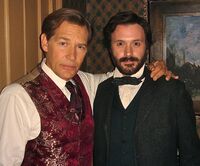 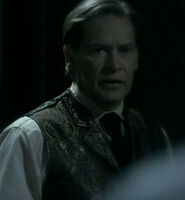 Retrieved from "https://vampirediaries.fandom.com/wiki/Giuseppe_Salvatore?oldid=2787945"
Community content is available under CC-BY-SA unless otherwise noted.