Gloria was a character of The Vampire Diaries. She was a flamboyant soothsayer and, described by Niklaus, a very powerful witch. However, despite her charmingly good looks and forty-year old appearance, Gloria was more than one-hundred years old, though was not immortal.

Though not much is known about her early life, it is known that she is well trained in the magical arts and knowledgeable about mystical objects. She has also owned her own bar for decades.

In The End of the Affair, Gloria receives a surprise visit from Klaus Mikaelson and Stefan Salvatore, though she already knows to an extend his troubles. He's a hybrid out to make more hybrids, but he can't. She tells him that he obviously did something wrong, though every spell has a loophole. She can help, but with a curse that old, she'd have to contact the witch that created it and in order for her to do so, she'd need Rebekah. Klaus brushes her off, as she was daggered, but Gloria demands that she had what Gloria needed. Klaus and Stefan leave Gloria to bring back Rebekah.

Later, Gloria is visited by Damon Salvatore, who complements her looks. Damon, along with Elena had come to find Stefan, and wonders if she'd seen him. She tells him that he's running with the wrong crowd and he and Klaus make a bad combo. Damon pressures her to tell him where they went but all she's willing to share is that they're out running an errand for her and they'd be back latter that night. She may think Damon was cute, but he's still a vampire and went back to working her bar leaving Damon to wait around for his brother.

When Klaus finally comes back and he and Damon get into another fight and the former nearly kills the latter, Gloria stops Klaus by igniting the stake Klaus was going to use, claiming she wasn't going to have a dead body in her bar.

In Disturbing Behavior, Gloria attempts to locate Rebekah's necklace though she fails to do so, as she has nothing to go off of. Rebekah offers her assistance as she's worn the necklace for a thousand years. Gloria takes her hand and prepares her spell. While she performs her magic, back in Mystic Falls, the necklace in Elena's possession begins to burn her, and she senses something. With the spell complete, she informs Klaus that she's found it and Rebekah demands to know it's location. Gloria tells her that it doesn't work like that, that she gets images and saw a girl with her friends. To get more information, she'd have to dive back in. Klaus pushes her to do so, but Gloria needs more time and space, since they're harshing her "ju-ju". Stefan coaxes Klaus away, giving Gloria the space she needs.

A while later, Stefan returns to Gloria's and finds her not resting. A secret they both now found. Stefan asks her what she saw, but she tells him that it's what she heard that was interesting. The girls with the necklace were talking about him. Stefan wonders why she didn't tell Klaus. Gloria, however, is looking out for herself and wouldn't help the half-bred with anything; she wants the talisman that belonged to the "Original Witch". Stefan can't help her, but she doesn't take "no" for an answer and threatens to tell Klaus. Stefan attempts to attack Gloria, but she's quicker and her magic is much strong and she immobilizes him with a non-verbal pain infliction spell.

With Stefan temporarily incapacitated, she performs a paralysis spell on him and prepares to get the information out from him the hard way. She begins with inserting iron hooks into Stefan's wrists to prevent him from healing and then concocts a special herb remedy to make a connection with his essence. With her hands placed on his chest, she's able to sense that the girl with the necklace, he loves her, would do and have done anything for her. She continues senses a lot of darkness, a lot of guilt, all in his effort to keep her away from Klaus. Wanting to know more, she pushes to ascertain why Klaus would be interested in one girl. Peering further, she discovers that the girl is the doppelgänger, who's supposed to be dead, and assumes that's the reason why Klaus can't make hybrids. Despite her new-found information, Katherine sneaks up behind her and as she turns to face her, she stabs her in the neck. Gloria falls to the floor, dead.

Gloria was a very powerful witch and a self proclaimed "old-school" voodoo practitioner capable of considerable feats of magic, according to Klaus. As a young witch in the 1920s, Gloria was determined to run her bar, Gloria's, and created a longevity spell that slowed down the aging process. Considering herbs and her spells allowed her to live for over a hundred years, Klaus attributed this feat as to what made Gloria so powerful, though she admitted that it would catch up to her one day. With her age and knowledge, Gloria was capable of performing strong Pain Infliction spells that could take down vampires like Stefan Salvatore just by looking at him. She was also able to locate Esther's Talisman, though she needed Rebekah to finish the spell. Gloria was able to ignite a stake with ease by simply pointing at it. More uniquely, she cast a paralysis spell upon Stefan, something she described as "nothing major". She was shown to apply her practice of voodoo by using Stefan's blood to make a connection to his essence/spirit. Her knowledge in herbs was evident, as she explained to Stefan and, using vervain, she tapped into Stefan's past and was able to figure out who the girl with the necklace was, even though Stefan was fighting back mentally. Given this connection, she was able to see details about Stefan, and know that he loved Elena. With her advanced age, she contained her spells within her own Grimoire.

Gloria had the typical weaknesses of a witch. 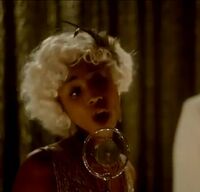 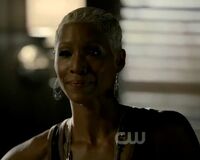