Dr. Grayson Gilbert was Jeremy Gilbert's father, Elena Gilbert's uncle/adoptive father, and the husband of Miranda Sommers-Gilbert. On May 23, 2009, Grayson and Miranda drowned after their car ran off of Wickery Bridge and into the lake. He died in place of Elena. It is later revealed during the first half of Season Five that Grayson Gilbert was a vampire hunter and led the Founder's Council through difficult times like Mikael's arrival - having plans if the council were ever to be compromised, and that he was also a member of the Augustine Society, and like the Whitmore family he tortured and experimented on the vampires.

Grayson learned at an early age about the existence of vampires, possibly from his father, and he told his younger brother John all about it. They both grew up firmly believing all vampires are evil and must be destroyed. Grayson and John had read every journal written by Johnathan Gilbert, their ancestor from 1864. From the journals they gleaned much of the town's secret history, and eventually Grayson and John both wore the Gilbert rings. As an adult he became a doctor and had a clinic on a property that he and his wife Miranda owned. Late one night, Grayson's brother John brought Isobel, his pregnant lover, to Grayson's office. Grayson agreed to deliver the baby, and together with his wife adopted her and named her Elena. Grayson protected Elena all his life from the world of vampires until he died. He also worked as a doctor at the local hospital and helped deliver Sarah Nelson in 1994.

Elena later learned that her parents had knowledge of the existence of vampires, and even possessed weapons to hunt and kill vampires, hidden behind a false wall in a closet at their lake house.

The night Grayson and Miranda died, Elena had ditched family night and gone to a bonfire party with her friends. On their way home from picking her up, their car went over the Wickery Bridge, trapping the three of them underwater. Miranda quickly lost consciousness, but although Grayson and Elena were still alive, they were unable to open the car doors to escape. Grayson ultimately drowned after refusing help from Stefan Salvatore until he had rescued Elena. When Stefan came back for them, they were both dead. Elena has felt some responsibility for their death, as the reason they were out driving that night was to pick her up. Later, when John explains the Gilbert rings to Jeremy, he confirms that the ring didn't work to save Grayson because he did not die a supernatural death, the only kind from which the ring could have protected him.

In The Departed, Grayson and Miranda's deaths were seen in flashback.

In I Know What You Did Last Summer, Elena is stunned to see a picture of her father with her deceased college roommate Megan and asks why Megan has a picture with her father.

Later, it is learned from Wes Maxfield that Grayson was a member of the secret society Augustine, and Wes somehow knew Grayson.

In The Cell Elena sees a photo of her father in the Whitmore house, revealing he was in fact an Augustine member who tortured vampires like the Whitmores. When Elena tells Damon about her father she starts crying and tells him, she understood that he was a member of the Town Council and a vampire hunter, but she didn't understand how he could be a member of the Augustine Society, who tortured and experimented on vampires, while he was so kind and good to his family, Damon tells her people aren't always who they seem to be and Elena then continues to cry about her father.

In Fifty Shades of Grayson, he is seen in flashbacks to when Elena was a little girl. It is revealed that he helped Megan with a disease with vampire blood and that he is the inspiration for what Wes is doing to the vampires.

In Black Hole Sun, he appears in a brief flashback delivering Sarah after her mother, Gail, was killed by Damon.

In I Was Feeling Epic, Grayson, Miranda, John and Jenna welcomed Elena to the afterlife. 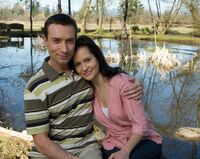 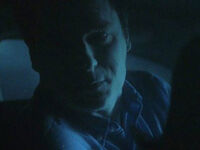 A Picture showing members of Augustine, including Grayson Gilbert. 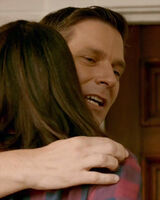