ELENA'S WORST NIGHTMARE — Elena awakens on the morning after the accident to find the thing she dreaded most has come true – she died with Damon's blood in her system and now must drink human blood to become a vampire or face death. Stefan promises Elena that he and Bonnie will exhaust every possible way out of the situation, but Damon is furious with his brother for letting Elena die in the first place. Bonnie pays a terrible price for her attempt to change Elena's fate, while Damon takes out his frustration and rage on Matt. In a rare moment of empathy, Rebekah is deeply touched by Stefan and Elena's devotion to one another. Pastor Young and the Town Council members begin rounding up the vampires and their supporters, leading to an unexpected tragedy.

Elena wakes up and finds out that she's in transition. Damon and Stefan take turns explaining to her (and the audience) exactly HOW she is about to turn into a vampire. Damon declares that Elena must drink blood fresh from the vein but Stefan says Bonnie will try to find a way to prevent Elena from becoming a vampire. This is because she has said so many times before that she doesn't want to become a vampire.

Klaus (in Tyler's body) demands that Bonnie restore him to his body. Bonnie convinces him to wait, if she can keep Elena human, Klaus would have his "blood bag" back. Pastor Young is heading the council now, and they are taking some tough measures: they occupy the hospital, put guards around the bloodbank, take the badge out of Sheriff Forbes and arrest Carol Lockwood.

Tyler is having survival guilt. Caroline mourns Tyler, who she believes is dead. She is captured by Pastor Young. Elena is riding an emotional roller coaster. She has vivid flashbacks about what Damon compelled her to forget. Also, she tries to eat a sandwich, but is unable to do so. Damon tries to stake Rebekah, but Pastor Young and his troops arrive just in time and interrupt him. Luckily he managed to hold on to the White Oak Stake as he avoided capture. Stefan is not so lucky and gets captured with Elena. She is served dinner she cannot eat, while Stefan is put in a cattle cell. Pastor Young explains to Elena that they've known each other since she was a little girl.

When Klaus/Tyler learns that Caroline has been captured, he runs to their transport car and rescues her - leaving behind a bewildered Rebekah, revealing himself to her in the process. Damon, Liz and Meredith try to figure out where Stefan and Elena have been taken. After almost being strangled by a very angry Damon, Matt imagines that maybe they have been taken to Pastor Young's cattle ranch. In the woods, Caroline tries to have some "glad you are not dead" "hot vampire-hybrid" sex, but Klaus/Tyler refuses her advances (not too much) and eventually she figures out it's Klaus in Tyler's body by the way he speaks.

Meanwhile, Elena tries to escape and believing she is also a vampire, she is put in a cell where she can hear, but not see Stefan. Rebekah watches everything from her cell, across from them.

Bonnie asks the spirits for help to save Elena, but is denied. She then stops her own heart, to go to the other side and pull Elena back. Her grandmother's spirit appears to tell her she cannot do that, and pushes her away from Elena, warning her that there will be consequences if she uses dark magic. Elena feels a force pulling her but she can't figure out what is pulling her.

Elena is dying because she has not fed. She confesses to Stefan she was on the bridge because she chose him. Rebekah is touched by their devotion to each other, and helps Stefan to kill one of the soldiers so that Elena could feed on his blood and complete the transition.

Damon recruits Matt to show him to where Elena is being held and to act as bait to draw the Pastor out. It works, but Damon is shot. He wakes up just in time to take the two men out. Vamped out, Elena superspeeds just in time to stop Damon from killing Matt for being alive. Again. Pastor Young watches everything from his window without interfering.

Rebekah confronts Klaus for not saving her, and they fight. Rebekah destroys the remaining bags with Elena's blood (that Klaus plans on using to make more hybrids) and Klaus breaks Rebekah's neck out of anger, telling her she is no longer his sister and means nothing to him.

Stefan and Elena have a touching moment on the roof of the Salvatore Boarding house. As the sun rises, he gives Elena her daylight ring. Pastor Young gathers all the council members in his house, with all the town's supply of vervain, pulls the gas line out, makes a speech about a "Greater Evil" and lights a zippo. The council is killed in the ensuing explosion.

Damon: (to Elena) "There is no way out. We all know the drill. You feed or you die. There is no door number three.

Stefan: "You know what? You weren't there the day Elena looked me in the eye and told me she absolutely never wanted this."
Damon: "Then you shouldn't have let her die."
Stefan: "I never meant for her to die. She asked me to help Matt first, and I did."
Damon: "And now, the world has one more quarterback. Bravo, brother."
Stefan: "I made a choice that I will regret for the rest of my life. Now, let me try to fix it."

Jeremy: (to Elena) "Your fangs coming yet?"

Rebekah: "Tragic about Elena. Not to make the gray cloud grayer, but does Matt even have automobile insurance for the car?"

Sheila Bennett: "She is not your problem to solve. Now go, before they keep you here."

"Wait for the Morning" – Amy Stroup

Klaus forces Bonnie to put him back in his body 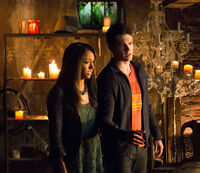 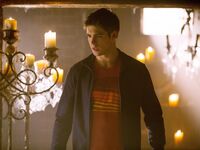 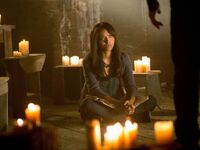 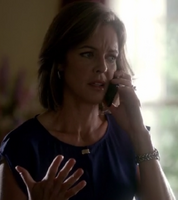 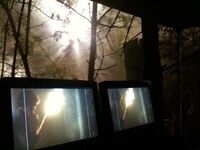 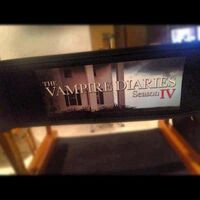 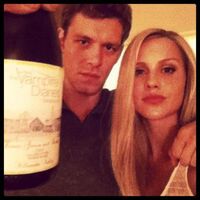 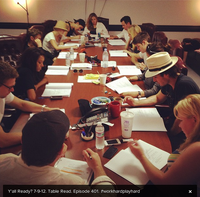 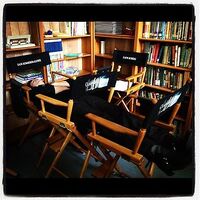 Retrieved from "https://vampirediaries.fandom.com/wiki/Growing_Pains?oldid=2788277"
Community content is available under CC-BY-SA unless otherwise noted.