Harper was a vampire of African American descent who fought in the Civil War. He was turned by Pearl in 1864, after being essentially killed on a battlefield (Blood Brothers). He was later imprisoned in the tomb under Fell's Church with a spell during the same year.

In Fool Me Once, in an attempt to free Katherine Pierce for Damon, Bonnie and Grams reopened the tomb with a spell only to have Damon discovers Katherine was missing. Before leaving, Damon in his agonized grief threw aside the blood he had waiting for her. Harper discovered this and after drinking it, escaped the tomb. 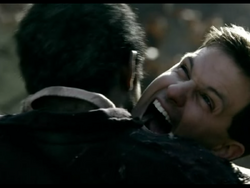 In A Few Good Men, He headed for town, but became aware of the ragged and archaic nature of his clothes when he came across a young man in the forest. With regret, he killed the man for his blood and clothes. He eventually made it to Mystic Falls somewhat bewildered by the new world of the early 21st Century including automobiles and a teenager rolling by on a board with wheels. He eventually made eye contact with Bethanne, a fellow vampire, who was sitting on a park bench. she guided him to Pearl who was staying at the Samantha Gibbons farmhouse with some of the other tomb vampires. 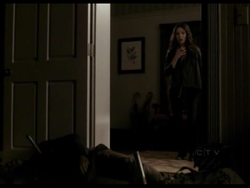 In Let The Right One In, Harper was the most loyal follower of Pearl. He even stood up to Frederick and his followers when they kidnapped Stefan, even if this caused him to get tied up. He was freed with the help of Elena, Alaric and Damon (although Damon almost killed him for just being there and a tomb vampire despite his attempt at saving Stefan's life).

In Blood Brothers, Harper is later killed by John Gilbert with a stake through the heart fired by a device that looked like a modernized crossbow, just like his mistress Pearl a few moments before.

He showed restraint and calm mannerisms, which was different than most of the tomb vampires. He listened to Pearl's orders without hesitation and was shown to dislike unnecessary violence, especially when it came to Frederick torturing Stefan.

He had a tall stature and an athletic build, wearing mainly plaid like clothing after getting out of the tomb. He had dark brown eyes and slightly curled black hair.

"You seem like a very nice person. I'm sorry."
—Harper to the hiker he encountered in the woods in A Few Good Men

As he staggered away weak from the Tomb, he did attack, kill, and drain a human male, taking his clothes as well. However, he seemed to truly regret the action and probably couldn't suppress his drive to feed because of the long time he went without any food. He apologized to the man, who was in the wrong place at the wrong time, before attacking him. (A Few Good Men)

After that encounter, he didn't display any contempt for humans or desire to harm or feed on them in his relatively short stay on the series. He wasn't around long enough for anything definitive to be gleaned of his attitude.

Harper possessed all the standard powers and abilities of a non-original vampire.

Harper had the typical weaknesses of a non-Original vampire.