A HALLOWEEN VICKI CAN SINK HER TEETH INTO — As Vicki's behavior becomes more infuriating, Stefan tries to help her. Elena tries to convince Jeremy to stay away from Vicki. Caroline gives Bonnie a necklace she took from Damon to wear with her Halloween costume, and when Damon tries to take it back, he is surprised by Bonnie's abilities. Bonnie discusses the incident with her grandmother and comes to learn more about her family's past. Trying to cheer Vicki up, Matt takes her to the high school's haunted house, but the evening soon takes a terrifying turn on everybody.

Vicki attacks Tyler but Damon and Stefan stop her, and Damon compels Tyler to forget it all. Jeremy tells Elena that he will be joining the search party for Vicki. Vicki calls Matt and tells him she's okay. Stefan tries to get Vicki to drink animal blood, but Damon convinces her that she needs human blood instead. Elena arrives and Stefan promises her that he will get through to Vicki.

Bonnie talks to her Grams about witchcraft before she leaves for school. Damon overhears Richard and Carol discussing the vampire in town. Caroline gives Bonnie Damon's crystal and tells her she doesn't care what she does with it, as long as it's gone.

Stefan gets Vicki drinking coffee and leaves briefly. Vicki tries to call Jeremy, but Elena refuses to let her, so Vicki pushes her against the wall and threatens to kill her unless she lets her see Jeremy. Stefan assures Elena that Vicki will calm down eventually.

Damon tells Vicki that he only turned her because he was bored. Damon and Stefan take Vicki outside, and Damon teaches her how to use her super speed. Vicki uses it to escape. She goes home where Matt's happy to see her. Stefan shows up, looking for Vicki, but she doesn't want to see him, so Matt sends him away. Elena convinces Jeremy to attend the Halloween Party with her and tries to convince Jeremy to let go of Vicki. He and Vicki text each other and plan to meet up at the party.

Damon flirts with Carol to get information. He tries to compel her, but she's wearing vervain. She tells him about the Founder's Council and he offers to get vervain for her when he explains that Zach is out of town. She tells him that anybody who showed up during the day to the Founders' Party and Heritage Display was eliminated as a suspect of being a vampire.

At the party, Matt tells Elena that Vicki's with him and she realizes that Jeremy's gone. Stefan finds Vicki and confronts her. Elena and Matt find them, and Vicki tells Matt that Stefan won't leave her alone. Vicki escapes, and Stefan tells Matt that he's trying to help Vicki. Vicki finds Jeremy and they kiss.

Damon discovers Bonnie has his crystal, but when he tries to take it from her, it burns him. Elena finds Vicki and Jeremy kissing outside just as she loses control. Annoyed by Elena, Vicki bites her, and Stefan arrives and stakes her.

Grams tells Bonnie that the crystal belonged to her ancestor and a very powerful witch, Emily Bennett. Grams tells Bonnie that it is now hers and she has to protect it. Elena, blaming Damon, slaps him. Matt asks Elena if she's seen Vicki, but she says she hasn't, calls him a good brother, and then cries in her car.

When Elena gets home, she comforts Jeremy over Vicki's death, and he begs her to "make it stop". Stefan arrives and Elena asks him if he can compel Jeremy to forget that Vicki died, but he says he isn't strong enough. Damon then appears and volunteers to do it, asking Elena what she wants Jeremy to remember. She tells him to make Jeremy believe that Vicki left town, he'll miss her, but knows it's for the best. As Damon compels Jeremy, Elena explains her existing feelings for Stefan to him, but when Damon exits the house, she walks back inside alone. 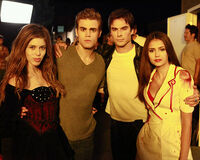