FATHERS & DAUGHTERS — After five long years apart, Klaus attempts to reconnect with his daughter, Hope. Even as father and daughter bond, the rest of the family is still in turmoil. Elijah mediates a conflict between Hayley and Freya to determine the best way to protect the family. Meanwhile, in New Orleans, Vincent tells Marcel terrible secrets about his ex-wife, Eva Sinclair, even as they begin their search for a mysterious witch who plans to sacrifice a group of innocent children – including Hope Mikaelson.

Klaus: "I want one day of peace with my daughter and I'm not asking."
Marcel: "How does one missing boy mean the whole city is in danger?"
Vincent: "Whoever is doing this they're gonna want more."
Klaus: "Nothing is going to harm my little girl."

Klaus: "I want one day of peace with my daughter and I'm not asking."
Rebekah: "What will you do with your immortality now that you're not burdened with saving Nik's soul?"
Elijah: "I don't know."
Marcel: "I know you've seen a lot of crazy. I've never seen you scared. How does one missing boy mean the whole city is in danger?"
Vincent: "Whoever is doing this they're gonna want more."
Klaus: "Nothing is going to harm my little girl."

Vincent: [Chanting Incantation]
Will: "I'm never going to get used to that."
Vincent: "Will, thanks for coming man. You got some news for me?"
Will: "Not the good kind. Adam Folsom isn't our only case. We got three additional reports of missing kids. Look, Vince, maybe this isn't your kind of case. Let me conduct my investigation. I'll let you know if anything supernatural happens."
Vincent: "I need you to stay out of this one okay? I need you to make sure the cops stay out of this one too."
Will: "I'm not going to leave you alone to deal with four missing kids."
Vincent: "I'm not going to be alone. I got Marcel and his vampires."
Will: "I still don't trust Marcel."
Vincent: "I don't--"
Marcel: "Yeah, well that's just too bad. Because I'm the only guy here getting anything done. One of my guys spotted some lights at the old Strix mansion. Now the place has been boarded up for years. All of a sudden, lock is busted off the front gate."
Will: "I should call this in."
Vincent: "Will, man, I'm trying to protect you."
Will: "Fine. These kidnappings are going to hit the press, Vince. My guess? You have until the end of the day at best."
Vincent: "Let's go."
Marcel: "Hey, hold up. weren't you just soaking this thing in lighter fluid this morning?"
Vincent: "Marcel, do me a favor. I want you to keep that book far away from me. If I even try to come for it, I want you to kill me."

Kol: "What's the hold up? We rescued Nik, we escaped mortal danger. Why are we not on a private jet to Saint-Tropez? You can catch up on the last five years while we're on our way. I assure you, you haven't missed much."
Elijah: "Circumstances have changed. We will leave here soon enough."
Rebekah: "We have a niece to consider."
Freya: "Kol has a point. We need to put an ocean between us and Marcel Gerard as soon as possible."
Klaus: "We're not going anywhere today. I want one day of peace with my daughter before we uproot her."
Freya: "Any delay is a risk."
Klaus: "One day! We're in the middle of nowhere. the house is cloaked, we weren't followed and I'm not asking!"
Hayley: "Everybody... Look who's awake."
Hope: "Hello."
Klaus: "Hello."
Hope: "Mom, can I go play in the garden?"
Hayley: "Yeah, sure."

"The Blues Got Me Rockin'" – Champion Jack Dupree

"Not A Moment Too Soon" – Spencer Thomson

The Originals Haunter of Ruins Trailer The CW 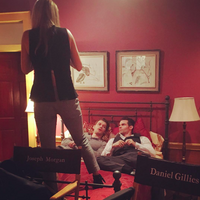 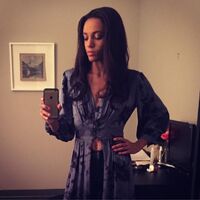 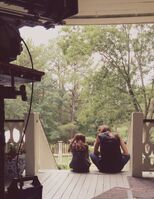 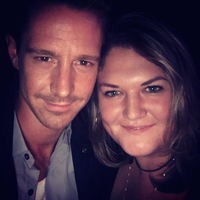 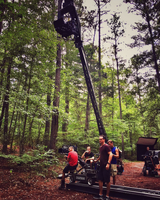 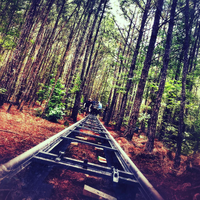 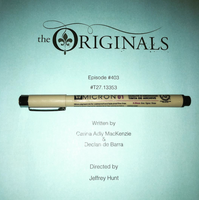 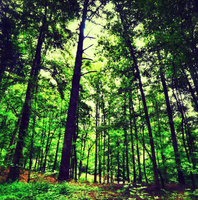 Retrieved from "https://vampirediaries.fandom.com/wiki/Haunter_of_Ruins?oldid=2785584"
Community content is available under CC-BY-SA unless otherwise noted.