TYLER RETURNS TO MYSTIC FALLS — Elena and Damon set off together to make sure Jeremy is safe in Denver, and to see if his special abilities can help reveal the information they need about ancient vampire bloodlines. It doesn't take them long to learn that Jeremy has been hanging with the wrong people. Stefan and Klaus both go to brutal extremes in their search for the missing weapon. Caroline is thrilled when Tyler returns to town, but Tyler soon suspects that something has been going on between Caroline and Klaus. Matt has his hands full trying to keep Rebekah busy organizing the school's upcoming 1920s Decade Dance.

Alaric is locked in the dungeon, where he will hopefully morph into his other half and reveal where he hid the last White Oak Stake. Stefan decides to stay and watch over him while Damon and Elena take a road trip to find Jeremy. Soon Stefan and Alaric are drinking away the time to try and speed up the turning process. Alas, it doesn't work, and neither does Klaus killing him so they soon resort to physical violence to see if Alaric's inner persona wants to stay alive.

On the road, Damon and Elena find Jeremy at the batting cages. They explain they need him to get in touch with Rose to find out who had turned her so they can figure out the bloodline of the Salvatores. (Rose turned Katherine, unwillingly, who then turned Damon and Stefan.) There conversation is cut short when Kol, Jeremy's supposed new friend, appears. Jeremy is shocked to learn he's an Original, and soon Damon stakes him to give them a heads start to get out of dodge.

Back in Mystic Falls, Caroline is finally reunited with Tyler, and immediately after embracing they head straight to sexy time. After, as they lay under the sheets, Caroline explains that finding out if the sire bond is broken isn't his biggest problem. She reveals that if Klaus isn't responsible for the Salvatore bloodline, then he can be killed, regardless if that then kills Tyler. But the two are hit with another bump when they go back to sleep at Caroline's house, and Tyler finds the drawings from Klaus. She says nothing happened between the two, but Tyler insists on finding another place to stay for the night.

At Klaus's mansion, Rebekah returns home to find Esther there. Esther explains that her body is weakened because Abby died and her power comes from the Bennett line. In an emotional exchange, Esther also tells her daughter she's been looking over her for 1,000 years, but that no one should live that long and that's why they should all be killed. Esther grabs Rebekah's hands, but then falls dead to the ground.

In the motel room, a shirtless Damon is sipping on alcohol as Elena watches. They stare at each other until he joins her in bed. She brings up what he did for Rose and asks, "Why don't you let people see the good in you?" Damon responds, "When people see good, they expect good and I don't want to have to live up to anyone's expectations." He then slowly takes her hand, but she jumps out of bed to get away. He follows and as she can no longer resist, she kisses him. They make out, until Jeremy interrupts. Rose has found an address for Mary. At the "vampire hoarders" house, Elena and Damon find Mary dead. Turns out Kol has already gotten to her. Now they'll never know who turned Mary.

Back at the dungeon, Stefan is fighting Alaric so that he'll be threatened and hopefully turn into his psycho alter ego. It actually works, and a beaten-up Alaric reveals he hid the stake in the cave — where vampires cannot go due to an old spell.

Damon, meanwhile, wants to pick up where he and Elena left off, but she walks away. "What the hell is this?" he asks. "Stefan thinks I have feelings for you," she says. Damon then calls Elena out on the fact that she was waiting for him to screw it all up, because that's what he does, but he says this time he won't. "This time I'm not going to make it so easy for you," he says. They end up driving home in silence where Rose quietly joins Jeremy in the back seat. She knows Jeremy isn't on Team Delena so she tells him why they might be a good thing. "It's not just that she makes him a better person, but he changes her, too. Damon challenges her, surprises her. Stefan is different. His love is pure. Damon is either the best thing for her or the worst."

In the final scene, Rebekah accompanies Alaric to the cave to retrieve the stake. While in there, he tries to strike a deal that because only one Original has to die, if she helps him, he'll make sure it's not her. But then Rebekah crosses the so-called spell threshold, much to Alaric's shock. "I don't want one dead; I want them all dead." It's revealed that it isn't really Rebekah, but Esther, who is possessing Rebekah in order to kill the Originals.

Rebekah: "So you'd rather dress in tacky colors with bad hair than be a classic flapper from the Jazz Age? Honestly, I don't know what my brother sees in you."
Caroline: "You see,  unlike some other people, I don't sleep with everyone I make eye-contact with."

Damon: (to Jeremy about Kol) "Well, didn't you find it weird you made a friend so fast? Have you met you?"

Damon: (speaking aloud to Rose's spirit) "Come on, Rose. You're not going to actually make us wait, are you? I know you're obsessed with me."

Alaric: (to Stefan about Jeremy) "Who knows? Maybe his alter ego is a pot-smoking hippie pacifist."

Rebekah: (to Esther) "Well, if you've come to spend your last moments with your loving daughter, prepare to be disappointed. You should have spent less time plotting my death."

Jeremy: "You traveled across the country to get me to talk to a dead vampire?"
Damon: "Dead vampire is redundant, but yes."

Rose: (to Jeremy) "Tell Damon I'm rooting for him and Elena."

Rose: (to Jeremy about Damon) "Tell him he is still dripping with sex."
Jeremy: (to Damon, clearly feeling awkward) "...She misses you."

Elena: "Stefan thinks that I have feelings for you."
Damon: "Do you?"

Stefan: "No matter what I﻿ go through to get her back-- fighting my bloodlust, trying to gain control of my life again-- none of that matters if she has feelings for somebody else."

Damon: (to Elena about Jeremy) "Next time we compel him, remind me to make him better at baseball."

Kol: "Shame about Mary, she used to be a blast. Don't quite know what happened. I fear all the time she spent with my family might have ruined her. She was a bit of an Original groupie."
Elena: "And were you her favorite?"
Kol: "You mean, did I turn her? I think I did. But no, wait, maybe it was Rebekah. There was also a Klaus period. And let's not forget the Elijah affair. I spoke to my brother. I know you're trying to find out who you're descended from. Now you never will. So, where did we leave off?" (He hits Damon with a baseball bat)

Elena: (to Alaric) "Stefan thinks I have unresolved feelings for Damon."
Alaric: "Do you?"
Elena: "I guess that's why I'm going on this trip."

Rebekah/Esther: "﻿I don't want one Original to die-- I want them all to die"

Stefan: "Kill an Original vampire, kill his entire bloodline."
Klaus: "So the fate of the entire vampire race depends on you finding a stake."

Stefan: "Tell me where the stake is before I kill you. [beat] Where's the stake?!"

Elena: "Why don't you let anyone see the good in you?"
Damon: "When people see good, they expect good. And I don't wanna live up to anyone's expectations."

Caroline: "We are gonna do this an actual bed, right?"
Tyler: "Yes. Once I know how to deal with Klaus."
Caroline: "Tell him to suck it." 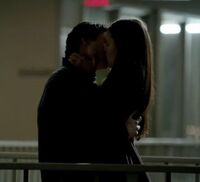 When Esther possesses Rebekah and stares at Klaus. 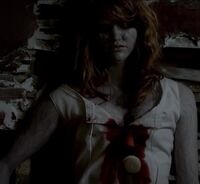 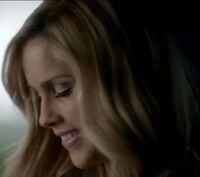 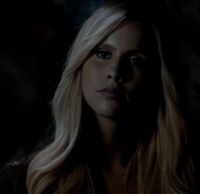 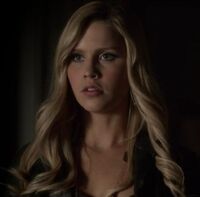 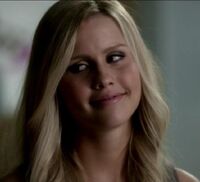 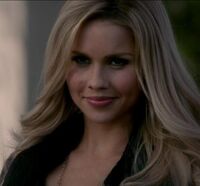 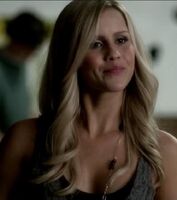 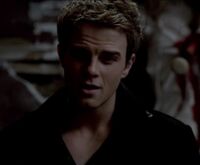 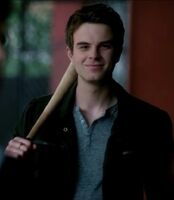 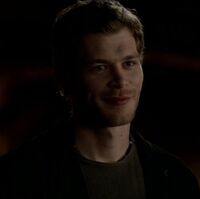 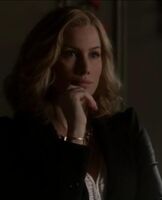 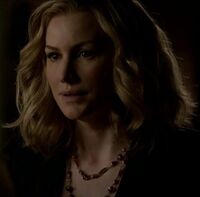 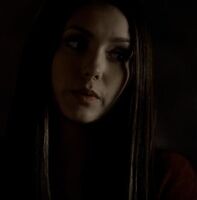 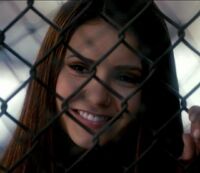 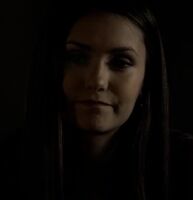 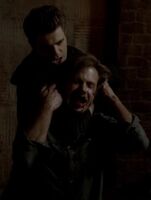 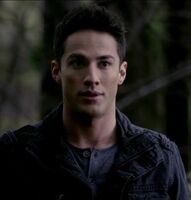 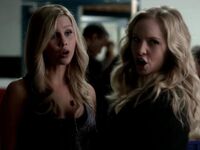 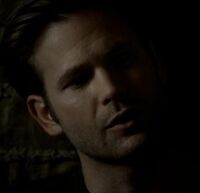 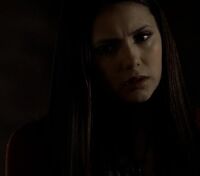 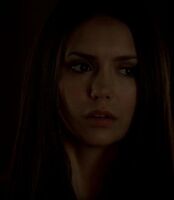 Retrieved from "https://vampirediaries.fandom.com/wiki/Heart_of_Darkness?oldid=2785668"
Community content is available under CC-BY-SA unless otherwise noted.