It has been suggested that this article be merged with Hope Mikaelson/Relationships. If you disagree, leave a message here.

Were Step-father/Step-daughter, Former Allies; Jackson loved Hope as if she was his own daughter, Jackson had sworn to protect Hope, Jackson was willing to run away from the Mikaelson family with Hope to keep his step-daughter and Hayley safe, Jackson died long before Hope could form a mutual familial relationship with him.

I Love You, Goodbye

The relationship between the evolved werewolf Jackson Kenner and tribrid Hope Mikaelson. Jackson is Hope's step-father since he is married to Hayley Marshall. At first, he didn't know that she was still alive, but learned about Hope's secret when Hayley revealed to him that the child was still alive. Before Jackson's death, he began taking care of her because he loved her as his own daughter and wanted to care for her for Hayley's sake.

In Sanctuary, Hayley was allowed to tell Jackson that Hope is alive. Klaus was the one who allowed him to know.

In I Love You, Goodbye, Hayley introduced Hope to Jackson. During the wedding, Jackson and his pack swore to protect Hope.

In They All Asked For You, Hope is seen with Hayley. Hayley can't seem to settle her so Jackson offers a helping hand. He manages to soothe Hope and she falls asleep.

In When the Levee Breaks, Jackson tied a bracelet around her arm to prevent her from practicing magic, so Dahlia wouldn't find them.

In Fire with Fire, Jackson and Hayley are on the move with Hope so they can get her out of New Orleans. Jackson defends himself from Klaus while Hayley gives Hope to his grandmother so they can run until Klaus is defeated. Unfortunately, their attempt in protecting Hope fails miserably and Jackson suffers under the wrath of Hope's father, who has Dahlia curse them as punishment for trying to take his daughter away from him. 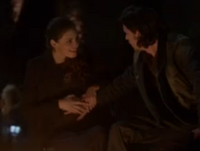 Retrieved from "https://vampirediaries.fandom.com/wiki/Hope_and_Jackson?oldid=2767087"
Community content is available under CC-BY-SA unless otherwise noted.