I'd Leave My Happy Home For You is the twentieth episode of the sixth season of The Vampire Diaries and the one hundred and thirty-first episode of the series overall overall.

THE CURE – As Alaric and Jo reluctantly participate in their bachelor and bachelorette parties, Damon and Elena discuss the ramifications from an impulsive offer that Damon makes. Unsure of what to do, Elena turns to Bonnie and Jo for advice, but is left conflicted when Bonnie raises some unanticipated concerns. When Enzo realizes Lily is on a dangerous downward spiral, he asks Stefan to help intervene before it's too late. Lastly, fed up with the supernatural threats that plague their town, Matt takes his frustrations out on Tyler, while Alaric considers a life-changing piece of advice.

{{Scroll-1| Alaric grades papers alone at school at night when he sees a figure streak past the door. Suddenly, someone throws a bag over his head. At the hospital, Jo gets a visit from a very stern, but super hot, police officer who confirms she's about to marry Alaric. Then he starts stripping as "Ladies Night" blares and Bonnie and Elena jump out to wish her a happy bachelorette party. At the Salvatore house, the bag is removed from Alaric's head and Matt, Damon and Stefan wish him a happy bachelor party in a room filled entirely with hot young girls. The girls hunker down by themselves in a diner. When Jo excuses herself, Bonnie asks Elena her thoughts on the cure. Elena doesn't know what to make of Damon's plans to become human with her, and isn't sure of her own feelings.

Damon tells Alaric his plan to feed on Elena after she becomes human, becoming human himself. Alaric can't believe that Damon hasn't told Stefan yet. Tyler joins the party and is concerned about Matt mixing booze with his pain pills. Matt isn't happy to see Enzo show up. Stefan finds a quiet place to leave Caroline a message asking her to call. Enzo finds him and tells him Lily is in bad shape and needs his help.

At the Mystic Grill, Lily follows a young man, intent on sucking him dry. Stefan intercepts her. Back in the Grill, Stefan tries to get Lily to admit she has a problem.

At the party, Tyler tries to get Matt to stop drinking and leave. Tyler beat up Deputy Taylor in their training program and Matt can't believe he can't control himself. Tyler points out if he becomes a police officer he might have to kill someone someday, and he doesn't want to ever be a werewolf again. Matt shoves Tyler, telling him he needs to develop self control. Tyler decks him, but walks away. Stefan calls Damon to tell him what's going on with Lily. Enzo tries to convince Damon he would make a terrible human.

Back at the diner, Bonnie tells Elena to take the cure, even though she thinks Elena is afraid she won't love Damon anymore. Jo thinks that ridiculous—she's an ex witch about to marry an ex vampire. She thinks all love requires a leap of faith and you are who you are. Elena gets a text from Damon and goes outside to find him at the top of a clock tower.

Stefan tries to teach his mom how to sublimate her urges. He thinks there's a chance his mother still has motherly feelings for him. She explains that Stefan reminds her of the pathetic human she was as his mother. In response, she jabs fork into his hand and attacks someone in full view of the entire Grill.

At the top of the clock tower, Elena worries Damon will resent her if he becomes human. They enjoy the perks of being vampires and jump gently down to the ground stories below.

Enzo arrives at the Grill, where Stefan has just finished compelling every person in there to forget what they just saw. Damon isn't answering his phone. Enzo takes advantage of the opportunity to tell Stefan that Damon has the cure and is planning on taking it. They split up to find Lily.

Lily finds Bonnie and Jo in the diner. Lily blames Bonnie for ruining her life. Bonnie uses magic to keep Lily at bay for a moment, but then Lily flings a spike for order tickets into Bonnie's neck. Lily turns on Jo and is about to attack when Jo blurts out that she's pregnant. Lily stops and listens, then announces Jo is having twins. She spares Jo.

Damon asks Elena her favorite parts of being a vampire. He likes the heightened sense and being able to compel people and plant memories. He shows Elena her old house. He tells her he'd give everything up to spend a lifetime with her. He has the cure with him. She admits she wants to take it and he says he's ready. "I love you," she says. "Til death do us part," he says. Elena drinks it. She gets woozy and starts remembering her erased memories of Damon. She remembers their first date, then kissing him on her porch, then everything else wiped away. She pricks her finger and it doesn't heal.

Stefan calls Damon to warn him not to take the cure because their mom is on the loose. When Damon gets off the phone, Lily appears and snaps his neck, leaving Elena human and alone with her. When Lily moves in to attack, Elena stabs her in the eye with a badge pin.

Elena runs into the Grill as memories of Damon continue to come back to her. She tries to block herself in the Grill storage room and escape into the tunnels through the vent. Lily comes after but can't find her. Jo tends to Bonnie, who has a spike protruding from her neck. Being pregnant with twins makes her No. 1 on Kai's most wanted list. Stefan finds Damon and tells him Elena is safe. Stefan is upset at Damon for not telling him about the cure, but they pause their argument to find Lily. She inside the Grill, wallowing in self pity. She doesn't see any point in getting better if she's alone. She grabs a table leg and prepares to stake herself but Stefan pleads with her to stick around for her sons. Lily charges Stefan to attack, but Damon injects her with vervain.

Alaric finds Jo at the hospital. Damon gave Bonnie some of his blood, she's fine. Jo breaks the news about the twins to Ric, and then the fact the Gemini coven will try to take them because a new twin merge is the only thing that can stop Kai. Alaric suggests they'll run away where the coven can't find them.

Damon finds Elena at home. She remembers every moment in their relationship, including when she asked him to take the cure with her on the island and he walked away. She tells him he needs to think things through. Lily wakes up in the cell in the basement with Enzo waiting outside. She begs to be let out and Stefan arrives. Lily shuns him. Stefan is prepared to wait centuries until she sees him as her son again. She promises him she's going to get her people back, no matter what it takes, and then he'll know devastation.

In the 1903 prison world, Kai, with deep holes in his neck, rings the dinner bell for his six dining companions, telling them it's time to get the hell out of that place.

Elena (to Damon): "For you, there's no going back."
Damon: "I'm madly in love with you. And taking this cure, Elena, won't change that."

Stefan (to Damon): "I think being human is the last thing you want."
Damon: "I've made up my mind."

Stefan: "Do not take that cure."

Bonnie: "What if the human you doesn't love Damon anymore?"

Elena: "You ready to give all this up?"

Alaric (to Jo): "Don't tell me, you've bailed on your shift and you're heading here to help me grade papers."
Jo: "Awww..... you know me so well; Except for the part where I'd rather be covered in Mrs. Robinson's intestinal bile than grading term papers."
Alaric: "So I'll take that as a no."
Jo: "I just realized tonight is my last shift as a single woman. I can't wait to marry you."
Alaric: "And I am counting the days."
Jo: "Me too."

Caroline: "Hey! It's Caroline! But duh! You knew that because you called. So leave a message and I'll call you back. Bye!"
Stefan: "You're so happy in your voice-mail. And speaking of happy, uh... that thumping base you hear in the background, that's um... Damon's genius idea to host Ric's bachelor party, despite the fact that our mother apparently lives here now, who I've been ducking by the way in case you haven't noticed. I guess what I'm saying is call me back, otherwise I'm gonna start running out of reasons to....avoid everything that is going on my life right now. Kind of like what you're doing, which is completely understandable which is really crappy timing for me and my problems. You should be here. Come home."
Enzo (to Stefan): "Well, that was utterly adorable."
Stefan: "What are you doing in my bedroom?"
Enzo: "Well believe me, there are a number of places I'd rather be; Strapped to a gurney, having my spleen cut out for instance. Unfortunately for me, I'm here because your mother needs your help."
Stefan: "My mother?"
Enzo: "Apparently, her beloved Ascendant's been destroyed. She's in bad shape. Use a bit of your time."
Stefan: "What the hell do you know about my mother?"

Jo (to Bonnie and Elena): "We have the entire diner to ourselves. Actual heaven."
Elena (to Jo): "If Caroline were here, it would be an actual spa day."
Jo (to Bonnie): "Hey. I don't want to know what Ric's doing, do I?"

Damon (to Alaric): "To you."
Alaric (to Damon): "Damon, if you take that cure, you could never be a vampire ever again."

Elena (to Bonnie): "Damon Salvatore stands in front of you and tells you that he wants to become a human again. Wouldn't you freak out? Honestly, it's just all very complicated right now. Ugh...."

The Vampire Diaries - I'd Leave My Happy Home for You Clip

The Vampire Diaries - Inside I'd Leave My Happy Home For You 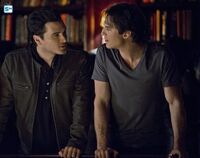 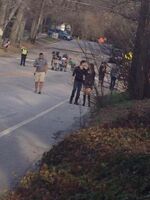 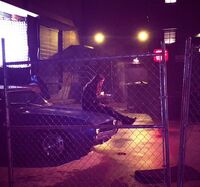 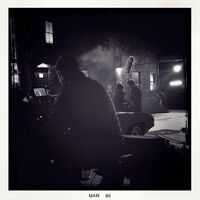 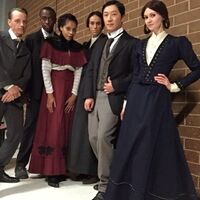 Retrieved from "https://vampirediaries.fandom.com/wiki/I%27d_Leave_My_Happy_Home_For_You?oldid=2785343"
Community content is available under CC-BY-SA unless otherwise noted.