SECRETS REVEALED — When the fallout of Hope's actions leaves her and Landon on the outs, she turns to Lizzie for help making things right. Meanwhile, Landon uncovers secrets about his past, while Josie looks into a secret that Alaric has been keeping. Rafael also appears.[2]

Following his kidnapping in the previous episode, Landon awakens at Triad Industries. Veronica debriefs Clarke, ordering him to find out his history and everything associated with him before throwing him into the "pit". When Veronica leaves, Clarke turns off the CCTV and throws the key into the pit, revealing that he is going to give him the answers he has been seeking. Clarke unties Landon and shows him photographs of ancient artefacts; Clarke reveals that some of the artefacts are decoys, and he needs Landon's help to find the real key. Landon refuses to help Clarke, and Clarke tells him that he'll tell him the story of his father and perhaps he will change his mind.

At the Salvatore School, Josie uses a decipher to search the library of anything relating to the Merge. She finds numerous volumes, which she takes to investigate. Tensions around the school are high, Hope is avoiding Roman, whereas Rafael is avoiding Hope. Rafael's eyes glow orange as he walks through the halls and the next thing he knows, he is playing basketball in the gym. Jed reveals that he has been in the gym for the past hour, however Rafael has no recollection of the situation.

In his office, Alaric shows Emma and Hope a voicemail from Landon. In the voicemail, Landon reveals that he is taking some time away from the school to go camping, but asks Alaric to say "hi" to Rafael and Jed. Hope is immediately concerned by the voicemail, questioning why Landon would greet Jed; she remarks that they need to find Landon, however Alaric is opposed, citing that they should respect his privacy. Hope leaves abruptly and angrily, leaving Emma and Alaric alone. Emma believes that Rafael is sliding between his wolf and human mind, and will soon lose control. Emma suggests bringing Dorian back to the school, however Alaric remarks that Dorian is too proud to return to the school.

Lizzie asks Hope to bake her a cake to give to Josie as an apology, given she is no longer sleeping in the same bed as her. Lizzie questions the situation around Landon, and Hope tells her that she's trying to figure out what to say to him. Lizzie suggests using Emma's prism to talk with her subconsciousness in the form of Landon. She agrees to trade Hope the prism for a cake. Hope agrees, somewhat bemused.

Josie reads through the numerous books on the Merge, however is unable to find anything as the corresponding pages have been removed. Lizzie approaches, and Josie uses magic to close all of the books, hiding her research. Lizzie gives her the cake, however Josie tells her that she isn't hungry. Lizzie notices the cipher, and Josie scrambles it before leaving forcefully.

Clarke hands Landon the photograph of his mother, and Landon remarks that he already knows the story surrounding his mother and how she became pregnant by one of the monsters in Malivore. Clarke tells Landon that this will make his story easier to tell, and goes on to detail the history of monsters — including the fear instilled in people by dragons. Clarke remarks that an alliance between witches, werewolves and vampires was formed to fix the issue, creating a golem powerful enough to consume the dragons; this golem would be named "Eater of the Dark", but now goes by the name Malivore. Clarke remarks that the golem is his father.

Lizzie hands Hope the prism, warning her that the first use is sometimes a little weird. In return, Hope gives Lizzie a book from Alaric's office titled "The History of the Gemini Coven", remarking that it could have something written about the Merge inside. Lizzie is upbeat, and tells Hope that she believes everything will work out in the end.

Hope uses the prism to talk with her subconsciousness, which takes the form of Landon. She tells Landon that she is sorry for anything she had previously said and didn't mean to hurt his feelings. "Landon" asks if that is everything, and accepts her apology, but questions if that was actually what she wanted to say. Hope begins arguing with her self, remarking that the imaginary Landon is annoying.

Landon questions how a golem can be his father, and Clarke remarks that Malivore did not stay a golem, but became sentient. Triad wished to return him to mud, however Malivore had made a deal with the humans, who set him free to continue his purge of the supernatural. Eventually, Malivore became lonely and created numerous golems, however these golems could not co-create, until Landon was born. Landon does not believe Clarke, until he reveals that he was there, and is Landon's brother. He reveals the story of how Malivore grew weak, and when they realized he was violating nature by creating a lineage, the original Triad descendants "rebelled against their god" and trapped him using dark magic; this turned him into a "black pit".

Lizzie hands Josie the book, but Josie remarks that she doesn't want Lizzie's help, but something of her own. Josie believes she is becoming suffocated by Lizzie, and wants a separate life from her. This shocks Lizzie who is visibly upset by Josie's remark. Lizzie's magic begins overwhelming her given Josie's remarks. Hope questions what is happening, and Lizzie remarks that she is worried Josie is trying to leave her. Hope tells Lizzie that she'll call her Aunt Freya, who will possibly know something about the Merge. Hope talks with Josie about the situation, believing a crash is about to occur. Josie tells Hope to stay away, given the whole situation has been brought on Lizzie by herself.

Landon still doesn't believe Clarke, but Clarke tells him that he has no other excuse for stealing the knife. Clarke remarks that Malivore is immortal, however Landon remarks that nothing is immortal and Nature always finds a loophole. Until that loophole could be found, Clarke explains, Malivore was bound with three locks. Landon questions why Clarke is trying to return Malivore given he betrayed him, and Clarke reveals that Triad Industries is abusing Malivore's abilities, and began throwing anyone they didn't like into the pit. Eventually, Clarke returned to Malivore, who expelled him decades later. Clarke eventually asks if Landon will help, and Landon points to one of the artefacts in front of him after Clarke reveals Triad is chemically altering Malivore to use against the protected species.

Emma talks with Alaric, revealing that she has noticed his grip and control on the school is slipping. She reveals that the schools mission has grown beyond his control, and the only thing she can do is take a sabbatical to hopefully make him realize what is going on.

Josie arrives at her room to find Lizzie reading. She reveals that she came to get some stuff, and the two get into a heated argument over Josie worrying about Lizzie. Both offend each other, and this eventually results in a magical fight between the two in which Josie overpowers Lizzie, sending her flying across the room. Josie is confused and ashamed of what she has done and apologizes before leaving the room hastily.

Hope is sat in Alaric's office when he arrives. She is shocked and reveals that Freya explained the Merge, and that Alaric must tell Lizzie and Josie — who both have nearly figured it out — before she does. Alaric later explains the Merge to both Lizzie and Josie on Hope's advice.

Hope tries out the prism one more time, revealing that she did want to protect "Landon", but was also afraid of him leaving. Hope believes her past losses are her fault, therefore she wanted to protect "Landon" as much as possible. She apologizes again for lying, and explains that she loves him; the two are shocked when she realizes that Hope has expressed her love. Hope thinks of anything else she can say, and "Landon" tells her that she's known he is in trouble all along and that she needs to save him. With this, they listen to the voicemail again, with Roman using his enhanced senses to listen deeper. They conclude that Landon has been kidnapped by Triad, and that they must leave to save him.

"You know, in the beginning, there was balance. You know, when Caroline and I opened the school, it made sense. Then it was it was just me, and and I-I. I thought I was strong enough to manage it alone. But I just made so many mistakes. I thought if I just kept moving, I could outrun them, you know? But they caught up to me."
—Alaric to Dorian

Veronica realizes that Landon and Clarke have escaped, and one of the security guards shows her a photograph of Clarke, revealing he is one of the original scientists. She remarks that she knows where they're headed and to prep a security team. Alaric is finally able to convince Dorian to return to the school. When Hope and Rafael try to leave the school, they are met by Triad Industries who storm the estate.

Legacies I'll Tell You A Story Scene The CW

Legacies Inside I'll Tell You A Story The CW 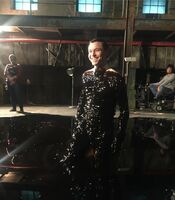 Retrieved from "https://vampirediaries.fandom.com/wiki/I%27ll_Tell_You_a_Story?oldid=2785535"
Community content is available under CC-BY-SA unless otherwise noted.