A DEAL WITH THE DEVIL — Damon finds himself in hot water after he carries out a plan that requires Alaric's unwilling participation. When Elena shares some hopeful news with Jeremy about Bonnie, she is caught off guard by his reaction. Liv helps Elena and Damon with their plan to get Bonnie back, but when things take an unexpected turn, she's left with a difficult choice to make. Elsewhere, Matt takes matters into his own hands when Enzo's actions cross the line, and Kai's existence continues to be a dangerous threat. Stefan and Tyler also appear.

Back with Jo, Alaric pulls out all the stops with a candlelit take-out Thai dinner and wine, to complete the compelled mission Damon gave him of getting the ascendant from her. She was able to break free of her family after she set up Kai to be banished. They didn't know she took the ascendant with her, but it helped her feel safe, like as long as she had it, Kai couldn't get free. She used to keep it under her pillow, but says now that she's a grown-up she keeps it in her underwear drawer, next to her pot.Stefan warns Damon that Alaric is going to hate him for compelling him. After Alaric delivers the ascendant, Damon compels Alaric again, to forget any of it any happened.

Jeremy is much better after two weeks off booze. He tells Elena he finally canceled Bonnie's cell phone, cried a lot and is moving on. And then Elena tells him Bonnie's still alive. He's skeptical.

After two weeks hiding out from her coven, Liv is prepared to leave Tyler's house in Mystic Falls to help Elena find Bonnie. Tyler tries to talk her into staying, but she doesn't want to keep hiding.Matt burns the last traces of Tripp's community protection group and Sara is ready for his help looking into her family.Elena and Damon meet Liv in the woods with the ascendant and blood from Lucy Bennett. Damon doesn't share just how he got it from Jo. Liv gives them vials of her blood to drink to link them to her so she can find them and bring them back, plus an extra for Bonnie. Liv pours the Bennett blood on the ascendant and recites the spell. Elena and Damon end up in Nowhere Land.

Meanwhile, Kai is riding in the back of a cab with his new smart phone and skinny jeans, fresh off the plane. Instead of paying his cabbie, he garrotes him with his earbud cord. Elena and Damon search the Salvatore house in 1994 but find neither Kai nor Bonnie. Damon pages Kai.

Matt and Sara wait to meet Stefan at the diner near Whitmore. Enzo drops by shortly before Stefan, who then arrives and meets his cousin of sorts.

In 1994, Damon stops Elena from watching his video journal about the prison being his personal hell. The phone rings, but it's not Kai, it's Bonnie—calling from a pay phone in Muncie, Indiana. She's six and a half hours away and Liv has to pull them out in seven. Damon starts to worry that Kai is already out.

Meanwhile, Kai sits down on a bar stool at Whitmore, where Liv waits on the long lost brother who tried to kill her when she was a child. She doesn't recognize him.

At Jo's place, she confronts Alaric about her missing ascendant. She believes he wouldn't take it on his own and challenges him to cross into Mystic Falls to see if Damon compelled him and make the compulsion go away.

Back at the 1994 Salvatore house, Damon makes Elena blueberry pancakes and enjoys it when she adds whipped cream fangs like he used to do. Elena sees the news story about Kai's murderous rampage and wonders why Jo would hand over the ascendant. He confesses.

Elena thinks he only did it so Bonnie could help Elena remember that she loves him.

At the diner, Sara tells Stefan her life story. He orders a milkshake and takes advantage of the noise from the machine to whisper to her so Enzo nearby can't hear. He confronts her for lying and tells her to walk out with him.

Back at the bar, Liv finally cards Kai when he orders booze. All she notices at first is the 1972 birth date, but he points out the name and address. She tries to run but he grabs her. He realizes their dad must have erased all traces of him. He siphons her magic and they stalk each other through the bar, with him blocking her exit. She races up to the balcony and has her cornered until Tyler shows up and shoves him off the side.

Back at the diner, Enzo thinks it's weird that Sara left with Stefan. Enzo freely admits he hates Stefan, but it's mostly because Stefan gets away with things that he doesn't.

In the car with Stefan, Sara insists that Zach Salvatore is her father but Stefan doesn't believe her—because he knows that right now Sara Salvatore is in her dorm room at Duke University, where she's an art major. She was adopted out of the hospital, Stefan made sure of it and has looked out for her her entire lift. Sara tries to run.

She admits her name is Monique.

In 1994, Damon finds Elena on her front porch. He tells her that on May 10, 1994 he was mad at Stefan and acted out and a lot of people died. He's felt guilty ever since, which is why he thought he was in his personal hell. But Bonnie wouldn't let him believe it and kept him going. He tells Elena he's doing this for Bonnie.

Elena starts to get nostalgic about her old house, and good memories in general. She apologizes to Damon for compelling memories of him away. He promises to make her new ones. He touches her face gently and they're having a moment when something starts to happen.

Suddenly they find themselves back in the cemetery in Mystic Falls. Tyler is there with Liv. He's taking her back to Mystic Falls before Kai can take any more of her magic. Elena starts to follow them, but the border of Mystic Falls stops her.

Back with Stefan, Monique confesses she met Sara at a sleep away camp and decided to try her life after Sara said she had no interest in finding her real family. Monique takes off her vervane when Stefan asks, realizing the jig is up. He compels her to forget about Sara Salvatore and Mystic Falls and leave town. But before she can, Enzo and Matt pull up.

Enzo isn't content to let her just leave, even after Stefan says she's a con artist. He grabs her by the neck and threatens to kill her to make Stefan give up her secret. When Stefan doesn't talk, Enzo kills her. Stefan has to keep Matt from going after him. Back by the gravesite, Damon assures Elena that they can go back for Bonnie any time. But then Kai finds them. Damon is eager to kill him, but Kai still has Liv's magic and incapacitates him. Elena scrambles to pick up the pieces of the ascendant after Kai smashes it, but he catches it and Elena's arm on fire. Kai turns invisible to avoid Damon's bull rush, but Damon swings a tree branch in a wide arc and knocks Kai across the border of Mystic Falls. Kai points out this now means there's a psycho loose in Mystic Falls and no vampires can stop him. With Monique's body, Matt is angry with Stefan for not doing more to try to stop Enzo. Stefan tries to convince him he's trying to do the right thing, but Matt argues that humans lives will always mean less than vampires, which means they'll always be on opposite sides. Back at the Salvatore house, Jeremy pours himself a bourbon and answers Elena's call, expecting that Bonnie isn't with her and something went wrong at the last minute.

When he hangs up, Matt joins him with his crossbow. He wants Jeremy to be a hunter again to help him kill Enzo. Alaric confronts Damon in the woods. He doesn't want to hear Damon's excuses that Kai getting out isn't their fault. He takes Alaric's punches. Damon tells Elena he left Bonnie a note to meet them and knows she's probably there and all alone right now. Back in 1994, Bonnie goes to meet them and crumples when she realizes they're not there. Tyler comes home to find Kai sitting in his house. "This is going to sound crazy, but I want to save Liv's life. Feel like making a deal with the devil?" Kai asks.

Damon: "Let's go get her."
Bonnie: "I can't believe I am hearing your voice."
Elena: "You're coming home."
Elena: "I'm sorry for compelling away the memories. They were only half mine."
Damon: "We'll make new ones."

"Trick Of The Light" – Lonely The Brave

The Vampire Diaries - I Alone Trailer

The Vampire Diaries - Inside I Alone

The Vampire Diaries - I Alone Clip 2

The Vampire Diaries - Rehash I Alone 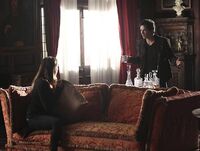 Retrieved from "https://vampirediaries.fandom.com/wiki/I_Alone?oldid=2785334"
Community content is available under CC-BY-SA unless otherwise noted.