THE RETURN OF THE NECROMANCER — Back and ready to wreak havoc, The Necromancer's plan for revenge on Malivore takes a turn when he realizes he is now a human and powerless. To mend fences with Josie, Hope offers to help her learn more about the mora miserium. Elsewhere, Alaric enlists Landon's help to find out if Sebastian is a threat to the school. Lizzie and MG also appear.[2]

Texas, one year previously. The Necromancer is released from Malivore but has assumed the identity of his former, human self. He attempts to exhibit his control of his powers over mall-security, however is unable to do so, exclaiming that Malivore broke their deal and took away his magic. The security guard threatens to call the cops, which causes the Necromancer to flee and assume a human life.

Meanwhile, Sebastian has began integration into life at the Salvatore Boarding School for the Young & Gifted and does not leave Lizzie's side. This poses a problem for Alaric, who does not trust Sebastian, given he does not meet their ordinary admissions policies. In a discussion with Dorian, Alaric expresses his concern, whilst Dorian reveals that Caroline wants them to find the real Professor Vardemus and check out his situation. With Alaric's concerns coming to a head, he instructs Sebastian that he will undergo a series of tests — with Landon leading them — to determine if he is a right fit for the Salvatore School. Whilst the mayhem of the new semester begins, Hope moves back into her room, which she now shares with Alyssa Chang.

The Necromancer, now going by the name Ted, struggles with the concept of a human life, working in an ice-cream shop. He shares his concerns with a fellow colleague, and attempts to show him the ropes of necromancy. He is able to raise a cockroach from the dead, which stuns his colleague who agrees to follow him as his accolade. Three-months later, the Necromancer struggles trying to return a cat from dead. The two talk about Malivore and his reasons for taking his powers, but the Necromancer is unable to remember who he stole the knife from — Hope.

Two months following the Necromancer's breakdown, he turns away from his birthright, believing he cannot reclaim what he used to be. Chad, however, questions the whereabouts of Malivore, stating that they should check out what is left. They take a trip to Triad Industries, the last known location of the Malivore portal, however they are confused to find the portal is closed. The Necromancer surmises that to gain back his power, he must sacrifice the thing that he holds dear: Chad. With this, he stabs him, killing him instantly. Aspiring to return to his former looks, the Necromancer takes the knife to his face, and one month later, he is able to return Chad from the dead. He gives X a red cape — identical to the one terrorizing the residents of Mystic Falls — and tells him that the two are going to a place of immense power; Virginia.

At dinner, MG expresses his distaste towards Sebastian, with Alyssa stating that he should ensure he fails his assessments. With this, she purposefully drops a plate on the floor whilst ensuring it slices her, drawing blood. This causes a reaction from all of the vampires, and Dorian calls for them all to flee and for the wolves to form a pack line, protecting Alyssa. The facade fails, however, and MG is the only vampire who rushes for the blood. Sebastian is able restrain him and guide him through the pain — he questions if he is really the one who Landon and the school should worry about.

Josie sits with the mora miserium and casts a spell allowing her to see the future if she continues to abuse dark magic. The future is bleak, ending in her causing the destruction of the Salvatore School. Josie is visibly concerned by the vision and heads to the library to study magical nullification. Dorian questions the research and Josie fails to pass it off as an assignment from Clarke. Hope manages to convince Dorian that she can help with whatever spell Josie is trying to cast, and Dorian accepts this. When he leaves, Hope tells Josie that she has experience with mora miseriums and an old friend told her that whilst you cannot nullify the magic, a simple protection spell will hold.

Landon takes Sebastian to the Old Mill for his final assessment: interaction with the witches. Sebastian gloats that witches love him, however is pleasantly surprised to find Alyssa running the exercise. She instructs Sebastian that they'd like to read his true feelings, to which he agrees to. Tensions begin to rise when Alyssa reveals that Sebastian is afraid of the modern world, but more so that he fears Lizzie will find out about his dark past. He begs Alyssa to stop, however she continues to push and Sebastian lashes at Landon, causing all of the witches to simultaneously attack him, temporarily incapacitating him. He flees and later, Landon finds him in the gym where he asks if Sebastian is alright. Sebastian reveals that he was sold to a pirate ship when he was eight and does not expect anything from the cruel world, but that it will not matter as he has failed the tests.

As promised, Hope helps Josie with the mora miserium, and the two cast a protection spell around it. Hope warns Josie, however, that naturally the object will degrade and eventually shatter no matter what they do, but they have time to figure something out. Josie questions why Clarke chose her, and Hope reveals that she is more powerful than she knows. Josie remarks that she doesn't want to be powerful or have the side effects that come with it. Attempting to make Josie feel better, Hope explains her moments immediately after escaping Malivore and how it felt to witness Josie and Landon together.

Having completed Sebastian's assessments, Landon interrupts Alaric — who is reading a book about vampire pirates — to alert him that Sebastian passed the assessments. Landon tells Alaric that Sebastian is not dangerous, but needs a chance to do the right thing. When Landon leaves, Alaric is seen reading a chapter in the book titled "Sebastian The Merciless".

Sebastian attacks a jogger somewhere off-campus, but is stopped by Alaric, who shoots him with an arrow in the back. Alaric tells him that he is willing to give him a chance if he follows the rules, however Sebastian remarks that he no longer follows rules. Sebastian taunts Alaric over Lizzie's safety, reciting that the only way to protect her is to kill him.

Meanwhile, a flashback to the day before shows the Necromancer perform a spell on Clarke's dead body. The spell liquefies Clarke's body, turning it into a portal to Malivore eerily familiar of the one previously in the Town Square.

Lizzie later visits Alaric in his office as he is putting away his crossbow. She questions if he kicked Sebastian out, however Alaric reveals that Sebastian chose to leave. With this, Lizzie begins to cry but exclaims that it is a good thing he is gone. 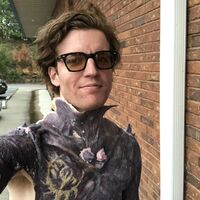 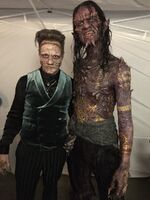 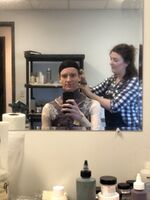 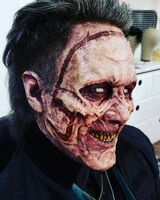 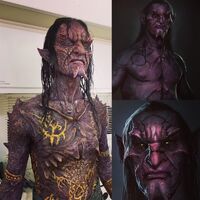 Retrieved from "https://vampirediaries.fandom.com/wiki/I_Couldn%27t_Have_Done_This_Without_You?oldid=2785545"
Community content is available under CC-BY-SA unless otherwise noted.