A WORLD WITHOUT DAMON SALVATORE — While Stefan and Valerie search for a magical herb that can keep him hidden from Rayna, Damon comes up with his own plan to take her down for good. However, while at The Armory, Bonnie makes a shocking discovery about Rayna that brings Damon's plan to a screeching halt. Elsewhere, a conversation with Caroline leaves Stefan questioning their future together, while Matt decides it may be time to truly take a stand against the vampires of Mystic Falls. Finally, as the season's middle chapter draws to a close, Damon's desire to take himself out of the game ramps up as he races to complete unfinished business with Stefan and Bonnie. Enzo and Alaric also appear.

Rayna emerges from the ashes again. She makes a quick trip to Mystic Falls. Just in time to save Matt and Penny's lives. They've been flirting and ridding the town of vampires for the past three days, and Julian's crew finally caught on to them. But Rayna handily takes out the pack of vamps trying to kill them, so the two cops owe her.

They pay her back by helping her torture vampires at Mystic Grill. She's trying to find out where Stefan is, but no one knows. Damon walks in and says he can help. He might have come there for Rayna to just take him out. But instead he takes her out. (Matt had texted to let him know where Rayna was.) Matt shoots her, Damon rips out her heart, and Penny stands by confused.

She thought all vampires were bad, but Matt explains that some are his friends. She instead tells Matt that it's his fault that Mystic Falls is in ruins. She says he has to stop standing by.

Meanwhile, after leaving New Orleans, Stefan is still on the run with Valerie. They're headed to a witch garden where they'll find herbs to make more of Freya's paste, which conceals his huntress mark. Only problem is the herbs are all gone, a lady with a very burned face tells them. Someone came before them and took them all. Because the herbs are dangerous to witches, they had been eradicated from the earth a century ago except for this stash. Now that it's gone, there's no hope of Stefan getting any more magic paste.

So Stefan and Valerie go back on the run. He calls Caroline to see if she wants to "tag in" for Valerie, but she says Alaric still needs her in Dallas. There are two babies who need to be fed, burped, changed, and put to sleep over and over again. She asks him about moving to Texas, and Stefan doesn't seem too into the idea. So for now, he jumps back in the car with Valerie to avoid Rayna.

But Damon is working on a plan to get Stefan off the run. After ripping out Rayna's heart, he hacked her into pieces, bagged the pieces, and threw those bags down a well. He's sitting near the well with a bloody apron on when she phoenix rebirths herself again. He makes yet another joke about how much she looks like Elena; she makes a Silence of the Lambs joke back. I kind of like their banter, but he's not keeping her in the well to make a new friend. He thinks maybe he can help her change her huntress nature (as they tried on Jeremy).

But while he is doing that, Bonnie is getting info on The Armory. Alex St. John apologizes to Bonnie for Enzo's techniques. She says they want to work with Bonnie. So she shows her into the lair, where the eight shamans who took their lives for Rayna's transformation lie. Alex calls them the "ever lastings," but as Bonnie points out only three of them look "everlasting." The rest just look dead.

Alex freaks out because there should be four who look like they're just sleeping. Once she leaves the room in a panic, Enzo tells Bonnie that these represent Rayna's lives. Every time she's reborn, a shaman dies. And he cuts the story off there (way to not give all the details, Enzo).

Bonnie texts Damon the info she gathered, so Damon kills Rayna again. But as soon as Enzo sees another shaman "die," he tells the rest of the story to Bonnie. Once Rayna's last life is spent, everyone who has her mark will die with her. Put simply: If Rayna dies one more time, so will Stefan.

Now, this is incredibly problematic since Damon buried Rayna. His plan was for her to wake up underground, suffocate, and die. Quickly, Bonnie tells Damon, and he rushes to dig her back up. She's already rebirthed and died. Cut to Stefan's hunter's mark spreading out and killing him. Valerie is trying to siphon out the magic, but it won't work. Luckily, Damon knows CPR and is able to revive Rayna. She coughs up dirt and then throws Damon across the field.

Rayna tells Damon she'll give him a head start, but instead he wants to talk about the man in her life she had hinted at earlier. He was a vampire, and she ended up staking him. She's about to stake Damon when a team of Armory people come and shoot her with approximately 1,000 tranquilizer darts. And it still takes her a while to fall.

Once Rayna is in captivity, Alex tells Enzo that Bonnie Bennet is the Armory's second priority.

Stefan is not happy. "If there's even a fraction of you that cares about me, your brother, your family, then you will not walk out that door," he says. And then Damon walks out.

Matt walks into the Salvatore mansion and says he's taking the town back. "Vampires need to leave Mystic Falls for good. All of you." Penny must have been really convincing for him to turn his back on Stefan like this. He has CCTV footage of everyone doing non-human things that he'll share with the world.

So Stefan gets in his car and takes a drive to Dallas. He pulls up to Ric's house and starts to walk up when he sees Caroline, Ric, and the twins looking like a nice little family. THIS GUY IS NOT HAVING A GOOD DAY. So he texts Valerie and says they should hit the road again. Bye, Steroline.

After leaving a note and a bottle of bourbon for Ric in Dallas, Damon heads to Brooklyn.He's in the storage space with Elena's coffin, about to get in his own coffin when Bonnie shows up. Enzo told her what he was doing and she is pissed. Damon says he left a note, but she says, "Are we friends?" He tries to reply with his characteristic wit, but she stops him. She says she's not okay with his decision if he stays in that coffin until Elena wakes, that means he stays in that coffin until she is dead. So not only is Bonnie losing a friend, but he didn't have the courage to tell her to her face after all they've been through together.

He tries to explain, but she stops him. "No. You don't get to say goodbye." And with that she walks away. He climbs inside and closes the lid.

Then we jump to the three-year "future" we've been watching all season. In rapid succession, we see the flashbacks from the past 11 episodes.

Flash Forward: Stefan tied up in that Dallas news station. Rayna is there saying she's exhausted now that she finally caught him, but she doesn't take credit. She knows it was because he came for either Damon or Caroline, though he won't answer which one.

Maybe Rayna is able to fight her huntress nature because she doesn't kill Stefan right away. She tells him there's a Plan B: She can "transfer" the mark to someone more deserving. She says it should have been Damon all along anyway. So she tells Stefan to choose who gets to die: himself or his brother. And it was all Damon's idea.

Stefan: "Mind just.. paying attention to the road a little bit more?"
Valerie: "Well I could...but then I might miss the world's largest pull of yarn coming up on the left....and there it goes. Not quite sure what I was expecting."
Stefan: "Well, that was the last of Freya's herbs, which means it's only a matter of time before they wear off and Rayna can track me."
Valerie: "Good thing we're on out way to get more."
Stefan: "Are we? Because it sure feels like we're on our way to the world'd largest waste of time."
Valerie: "We have to take back roads to avoid being spotted."
Stefan: "Hm.."
Valerie: "You've been only running a few days Stefan. Think of it like it's an adventure."
Stefan: "I don't want an adventure. I just wanna get these herbs and have a nice, quiet home-cooked meal with my girlfriend."
Valerie: "And do what? Pay bills? Talking about your date? Ugh."
Stefan: "Wait. You don't actually enjoy this do you?"
Valerie: "Hm. There's a certain constant in the lack of constance. Once you accept it, it's invigorating."

Enzo: "You actually came. I'm shocked."
Bonnie: "So did it grow back or...."
Enzo: "No. Actually, I had a reattacher but thank you for your concern."
Bonnie: "Less concern and more curiosity."
Enzo: "Well, at least you're thinking of me. I take it you receive our messages?"
Bonnie: "I did and I'm not stupid enough to think that your apologizes were anything other than a tactic to get me here, but here I am. Fair warning, if you try and disable my magic again, you'll only wish I had only cut off your hand."

Freya: "A mystical vampire huntress stabbed you with her magic sword and won't rest until you're dead."
Stefan: "Right. So, no matter how far I run, this wound acts as a beacon, drawing her to me."
Freya: "Well, I can't cure the wound, but this paste will mask its signal. Rayna Cruz won't know how to find you."

Damon: "You almost died in that place and I'll never let that happen again. Promise me you'll stay out of this Bon. I can handle Rayna."

Rayna: "Tell me everything you know about Stefan Salvatore or I'll send you to hell for eternity."

The Vampire Diaries 7x15 Webclip 1 - I Would for You

The Vampire Diaries I Would for You Scene The CW

The Vampire Diaries Inside TVD I Would for You HD 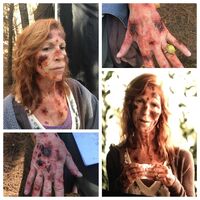 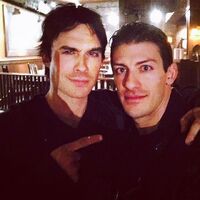 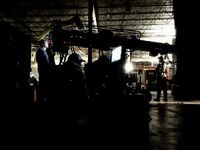 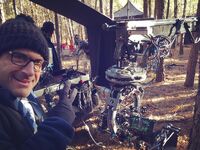 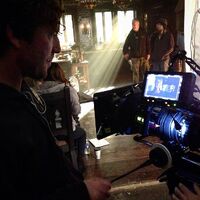 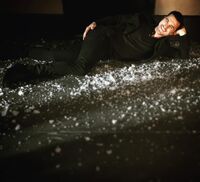 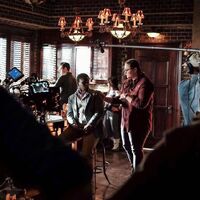 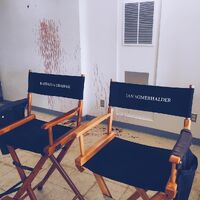 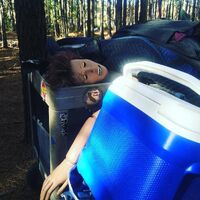 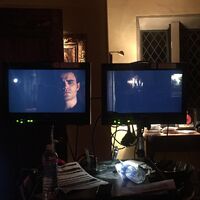 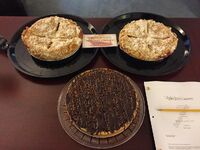 Retrieved from "https://vampirediaries.fandom.com/wiki/I_Would_for_You?oldid=2785717"
Community content is available under CC-BY-SA unless otherwise noted.