It has been suggested that this article be merged with Jeremy Gilbert/Relationships. If you disagree, leave a message here.

Between All My Children and Heart of Darkness

This is the relationship between the Supernatural Hunter, Jeremy Gilbert and the Original Vampire, Kol Mikaelson.

Originally, Kol pretended to be Jeremy's friend while the latter was in Denver so he could keep an eye on him. Later their relationship turned antagonistic, especially when the revelation of a cure for vampirism came up. As Jeremy was capable of finding it with his Hunter's Mark, he was crucial in the search. However, getting the cure would mean awakening Silas, whom Kol was terrified of. He tried to cut off Jeremy's arm to avoid the results of the Hunter's Curse, but in the end, Jeremy managed to kill the vampire who used to be his 'friend.'

After the war with Klaus put Jeremy in harm's way, Elena had Damon compel her brother to go to Colorado, away from all the violence, which Jeremy did. However, Klaus wouldn't let such a noticeable target escape that easily and had Kol follow Jeremy to Colorado. Jeremy had never met Kol so was unaware of who he was, leading to a false friendship that was all a ploy by Kol to keep a close eye on Jeremy. He spied on Jeremy for Klaus while under the charade of being a friend, even willing to kill Jeremy if Klaus gave the go-ahead.

In Heart of Darkness, when Damon and Elena came to Denver in need of Jeremy's assistance, Kol intercepted them at the batting cage, revealing his true nature to Jeremy after attacking Damon with a baseball bat. He half-halfheartedly apologized but admitted that they were not "buds" before trying to beat Damon further. When Jeremy, Damon, and Elena escaped, Jeremy still couldn't believe that Kol had been a vampire the whole time to which Damon responded with an abrupt comment over how Jeremy couldn't have made a real friend as fast as he had become friends with Kol.

In Catch Me If You Can, Jeremy and Kol met yet again when Jeremy was about to fight a whole bar full of vampires to grow his Hunter's Mark only to find they had all been slaughtered. Kol appeared, confessing that he was the culprit of the attack, calling Jeremy "mate," and telling him that it was good to see him again. Kol had learned about Jeremy's mark from Klaus and knew that it was a way to find the cure which was buried with Silas, an ancient immortal who Kol feared. He tried to explain that if they kept searching for the cure, they'd unleash Silas, and it would be Armageddon. He implored Jeremy to see reason, reminding him of their "friendship" in Colorado and that he knew Jeremy was a smart kid. However, Jeremy refused to go along with Kol and refused to stop trying to grow his mark. This upset Kol, but he didn't want to kill Jeremy, knowing all about the Hunter's Curse and that he'd be haunted for decades if he killed him. Instead, Kol threatened to tear off Jeremy's arms but was stopped by Damon while Jeremy escaped. Kol refused to give up though, compelling Damon to try and kill Jeremy even after Klaus told him to leave Jeremy alone. Later, Elena told Jeremy that if he really wanted to grow his mark as quickly as possible and without having to watch more innocent people be turned by Klaus, he should try to kill Kol.

In A View to a Kill, Elena and Jeremy continued their plan to kill Kol but Jeremy knew he'd need Bonnie's help. To try and set a trap for the Original, Elena called Kol on Jeremy's phone and though Kol was happy to see Jeremy's number, offering a day at the batting cages like old times, Elena suggested that they meet so they could negotiate a truce. Kol agreed but wanted it on his terms, arriving at her front door seconds later. Elena and Jeremy prepared inside, with Elena silently telling Jeremy through writing that she'd stall Kol and that he should go get Bonnie, who when the time came, would use her powers to keep Kol still while Jeremy staked him with the white oak stake. Jeremy rushed to go get Bonnie while Elena spoke with Kol, trying to stall him but due to complications with Bonnie's family, Jeremy couldn't get her help, arriving back home only to find that Kol was gone. Elena said he had left to consider the truce but Kol appeared moments later at the front door, rejecting the proposed ceasefire. Jeremy, with Elena, ran into the house with Kol in hot pursuit. Jeremy and Elena ambushed Kol with stakes and wooden bullets but the Original overpowered them, bringing Jeremy into the kitchen. Pulling out a butcher knife,

Kol explained that he didn't want to kill Jeremy since he'd be haunted by the Hunter's Curse so instead he'd cut off his tattooed arm. However, Kol didn't know which arm the tattoo was on and couldn't see it, so he wanted to chop off both arms just to be safe. Elena saved Jeremy though, surprising Kol and slamming him against the counter. Jeremy sprayed him with vervain-laced water with the sink nozzle and this gave Elena the opportunity to get the white oak stake from Kol's jacket, giving it to Jeremy. Jeremy stabbed Kol with it, setting him ablaze and seconds later, killing him. Jeremy then retrieved the stake from his former friend's body, this also causes the death of Kol's bloodline, Jeremy's Hunter's Mark completing a little while later, the tattoo now visible to all.

In The Walking Dead, after the veil to The Other Side had been brought down, Kol crossed over into the living world to seek revenge against Elena for her part in his death. He tracked her down to Jeremy's grave where he attacked her and prepared to kill her. However, Jeremy also returned from The Other Side, firing a stake at Kol and threatening him. Kol gleefully prepared to attack Jeremy, but was stopped by Stefan. This is the last time Jeremy and Kol meet.

Kol: "Jeremy, we were mates in Colorado. You're a smart lad. Why don't you call off this imbecilic treasure hunt?"
Jeremy: "I'm not calling anything off... mate."
Kol: "Well, I could kill you. But then I'd have to deal with the hunter's curse. And I, I don't particularly feel like being haunted for the next century. Better idea. I'll just rip off your arms."

Jeremy: "How many times do I need to kill you?"
Kol: "Jeremy Gilbert. Welcome back. Now, what's the saying? Kill me once, shame on you. Kill me twice, shame on..."
(Stefan comes up behind Kol and breaks his neck, temporarily killing him.)
Stefan: "Let's leave it at that, shall we?" 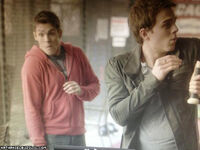 Behind the scenes, Heart of Darkness

Retrieved from "https://vampirediaries.fandom.com/wiki/Jeremy_and_Kol?oldid=2780756"
Community content is available under CC-BY-SA unless otherwise noted.