Jesse was a character who first appeared in the first episode of the fifth season of The Vampire Diaries. He was a smart, confident and disarmingly sweet upperclassman and student at Whitmore College. He was transitioned into an Augustine Vampire and used as a guinea pig by Dr. Wes Maxfield. He was later killed by Elena to save Damon.

Jesse was born in 1989 and when he graduated from high school, he went to attend Whitmore College.

In I Know What You Did Last Summer, Jesse meets Caroline and Elena at Whitmore College and invites them to a party to be held at night in Whitmore house. Caroline and Elena go to the party and they meet with Jesse and he shows an interest in Caroline, but she is not interested because she is in a relationship with Tyler and Jesse enters the party alone.

In True Lies, when Caroline and Elena arrive at Wes' applied microbiology class to spy on him, they discover Jesse is in the class. He asks Elena if they're both going to the bonfire that night and she says they are.

At the bonfire, Elena asked Jesse some questions about Dr. Maxfield, later Damon runs in and hits him over the head causing him to go unconscious. Caroline tells Jesse that Damon has anger issues while she helps him with his wounds. They talk and Jesse tried to kiss her. Caroline refuses and says she's got a boyfriend. They talk and see that they have much in common.

In For Whom the Bell Tolls, Jesse is attacked by an amnesic Stefan and Caroline feeds him her blood so that he may recover and then compels him to forget the event. When Jesse awakens, he finds himself in Professor Maxfield's lab. Unable to recollect what had happened, Jesse concludes that he must have been heavily intoxicated. Maxfield tells Jesse he has vampire blood in his system and kills him via lethal injection, having his own agenda.

In Monster's Ball, Maxfield runs some experiments on Jesse, who has completed the transition to vampire but has not fed for three days. Jesse continuously questions his immense hunger throughout Maxfield's observations. Maxfield comments that Jesse is a "perfect candidate".

In Dead Man on Campus, Jesse is able to escape from Maxfield and attacks his roommate Aaron due to his heightened senses. Caroline and Elena promise to teach him to make use of his abilities, starting with healing Aaron. As he and Caroline dance, he finds himself being urged to feed on her. He then confronts Dr. Maxfield as to why he wants to "feed on the girl that I like?". Maxfield explains that he was able to "modify" his physiology so that humans won't be his prey. Jesse attacks Damon but as Damon remarks he is stronger due to his age, Jesse proves him wrong and begins to feed on him. Jesse is ultimately killed by Elena in an attempt to save Damon. Caroline is saddened by his death as she and Elena promised to help him.

In The Cell, it has been said that Jesse killed himself as a cover story.

He was intelligent, confident and disarmingly sweet upperclassman at Whitmore College.

Jesse's overall personality had not changed but appeared to be frightened on what he can do; as his heightened senses caused him to attack Aaron. It was suggested that he would lose any self-control once he began to feed on other vampires.

Jesse was an attractive African-American young man with a shaven head, bright smile and green eyes. He had an athletic build and a tall stature, wearing a variety of different colored clothing.

Jesse possessed all the standard powers and abilities of an non-original vampire. In addition, Jesse was also a Augustine vampire, and had hunger for vampire blood and appear to be even stronger than the average vampire of their age, as Jesse, a weeks-old Augustine vampire, was able to overpower the 172-year-old Damon.

Jesse had the typical weaknesses of an non-Original vampire. 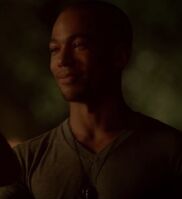 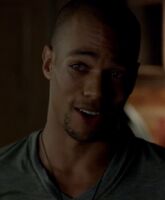 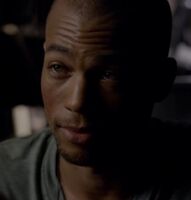 Retrieved from "https://vampirediaries.fandom.com/wiki/Jesse?oldid=2767142"
Community content is available under CC-BY-SA unless otherwise noted.