Jodi Lyn O'Keefe is an American actress and model who portrays Jo Laughlin and Florence on The Vampire Diaries and Legacies.

She began modeling at the age of eight after seeing her eldest sister Heather modelling. She modeled for various companies such as Gitano Jeans and DreamPhone. When she reached her teen years, she attended Saint John Vianney High School in Holmdel, New Jersey. After her sophomore year Jodi left school to star on the soap Another World (1964), on which she played Marguerite Cory. After she left Another World she immediately landed the role of Cassidy Bridges on the hit CBS cop action/drama Nash Bridges (1996). She played Cassidy for all six seasons. While she was filming Nash Bridges she made her big screen debut in the 1998 Halloween sequel Halloween H20: 20 Years Later (1998). Jodi then hit the spotlight when she portrayed the snobby, popular, and rich Taylor Vaughan in the 1999 hit teen flick She's All That (1999). She then starred in three more movies before she began to keep a lower profile. Jodi starred in the hit TV show The Vampire Diaries as Jo, a witch who worked in a hospital and fiancée to Alaric Saltzman, the former vampire hunter. She currently stars in VH1's Hit the Floor. 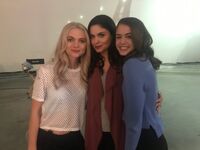 Retrieved from "https://vampirediaries.fandom.com/wiki/Jodi_Lyn_O%27Keefe?oldid=2780762"
Community content is available under CC-BY-SA unless otherwise noted.