Jules was a werewolf and a former recurring character of The Vampire Diaries. Jules was also a friend of Mason Lockwood's from Florida. She came to Mystic Falls looking for Mason after his disappearance. Jules and her boyfriend, Brady, kidnapped Caroline Forbes so that they could leave with Mason's nephew, Tyler and help him adjust to his new life as a werewolf. Stefan and Damon killed several of the werewolves. The remaining werewolves were about to kill the vampires, but Jonas intervened and warned the others to leave town. They tortured Damon until Elijah appeared and killed all of them except for Jules, who escaped. She left town with Tyler, only to return after his mother's accident. When Damon freed Tyler to prevent him being used in the sacrifice, Klaus captured Jules and ripped her heart out during the sacrifice.

Next to nothing is known about Jules before she came to Mystic Falls, but she did tell Damon that she had been at it for a long time, when she sniffed out his vampire scent, indicating that she triggered her werewolf curse a long time ago. Following the activation of her werewolf curse, Jules became the Alpha of a werewolf pack in Florida.

Jules comes to visit Tyler and tells him that she's a friend of Mason and that she's looking for him. Tyler says Mason has gone back to Florida, but she informs that he hasn't returned. She also confronts Damon and she knows from the beginning that he's a vampire. Damon threatens and warns her to stop looking for Mason. In By the Light of the Moon after Damon confronted her about Mason, she told Damon that he was "marked". At the Salvatore boarding house a wolf later appears bent on attacking the "marked' Damon. But Rose steps in front of Damon and is the one that gets bitten. Her bite apparently gets healed instantly but later, it is revealed that the wolf toxin is still in her shoulder.

It appears as though Jules is working with someone, as after she left the Lockwood House, she called someone to tell him that Mason had lied and that there was another werewolf: Tyler Lockwood. It is possible she was working with someone else (such as the werewolves, possibly who escaped the genocide and want revenge), it is yet to be known, but it is much awaited. It is later revealed to be the pack of werewolves that she and Mason were a part of and that she appears to lead along with her boyfriend Brady.

In The Descent, Jules shows her sociopath side more deeply: she kills an innocent ranger to cover her other murders while being a werewolf, she mocks Damon's concern with Rose and tells him to just kill her and she lies to Tyler about who killed Mason saying that Caroline did it with her vampire friends without reason even though they had a good reason to do it (he was working with Katherine and would have killed Stefan or Damon otherwise).

Jules becomes shocked when Tyler asks her about how she knows about Caroline being a vampire. She asks him, "You can't sniff them out?" She then asks him how many times he's turned into a werewolf. Also in the episode she foreshadows the come of more werewolves when she says to Tyler that they are not alone and the "others" soon will come. This is said when she tells him Caroline lied and that Mystic Falls is crawling with vampires. She assures Tyler not to worry, and says, "But don't worry. We'll get them. There are others like us. And they're on their way." She also tells Tyler, when he asks her what she wants with him, that she just wants to be his friend as Mason would have wanted that.

In Daddy Issues, she takes Caroline hostage and her boyfriend Brady tortures the vampire. She brings several werewolves to ambush the Salvatore brothers but the two vampires make quick work of their friends. Eventually the werewolves get the upper-hand until Jonas magically subdues them giving Tyler a warning to tell the werewolves to leave town while they still can. The vampires and Jonas all leave. Tyler comes into the trailer and talks to Jules and Brady. He unknowingly informs them that the moonstone is in Mystic Falls.

In Crying Wolf, Brady and Tyler leave to follow Stefan and Elena to the Gilbert Family Lake House in hopes of kidnapping Elena to break the curse. Jules and her werewolf pack capture Damon and torture him in his house but are stopped by Elijah who kills everyone but Jules who manages to escape. Brady is killed by Stefan after trying to capture Elena. At the end of the episode she and Tyler leave the town to an unknown location, with Jules promising not to lie to Tyler anymore when he states that there will be no more lies once they leave Mystic Falls.

In The Last Day, Jules returns to Mystic Falls where Tyler is visiting his injured mother as part of a plan set by Maddox to capture him as part of the ritual to break the curse. Jules tries to get Tyler out of Mystic Falls to protect him but lets him speak to Caroline for a few minutes. He is then captured by Maddox along with Caroline. After Damon and

Matt save Caroline and Tyler from Maddox, Damon goes to see Klaus and reveals to him what they had done. Klaus reveals that he had known something may go wrong and he had a contingency plan. He shows Damon a video recording of Jules chained up and turning into a werewolf.

In The Sun Also Rises, Jules is brought to the sacrifice spot by Greta with a spell that prevents her from turning completely. She is the first to be sacrificed by Klaus but before she dies, she tells Elena that everything she had done was for Tyler because she didn't want him to be alone in his adapting to the life as a werewolf. When her time to be sacrificed came, she quickly, almost instantly, attacks Klaus but he overpowers her and kills her by ripping out her heart. He then puts Jules' blood in the fire that is burning the Moonstone.

In Ghost World, Anna says that she thinks that some supernatural beings find peace after their death and that they don't go to The Other Side. Since Jules hasn't appeared as a ghost, she more than likely found peace.

Jules was arrogant and brave when facing vampires. Initially, this could be chalked up to the advantage she would gain from turning into a wolf on the full moon. However, even after the moon's passing, Jules stayed true to her confident and fearless nature, remarking that she wasn't scared of Damon, and that he could bite her. Although, she was a quite experienced werewolf, Jules was still susceptible to the effects of the full moon despite marking Damon, and believing that she would be able to control her wolf form long enough to kill him as retaliation for Mason's death. This belief of her's backfires/proved to be incorrect as Jules unwillingly killed innocent humans in her failed attempt to kill Damon.

She was willing to lie when she believed it benefited her and her fellow werewolves; as she lies to Tyler about what they needed from Elena Gilbert, pertaining to the curse of the sun and moon. Like the rest of her pack, Jules was selfish as she willingly tried to kidnap and kill Elena, to break the (suppose it) Sun and Moon Curse, so she, along with every other werewolf would no longer have to transform into a wolf every full moon.

Jules was also fiercely loyal to her own kind. Upon learning that Tyler was a "brand new" werewolf, she dedicated majority of her time into helping him, even telling Brady that she wanted Tyler to join them more than she wanted to avenge Mason's death. In her final moments before being killed by Klaus, she tells Elena that everything she had done was for Tyler.

Jules was a very attractive woman in her mid-twenties with blue eyes and medium length blonde hair. She had a feminine yet athletic and toned figure. Jules dressed in a practical fashion, typically wearing jean jackets, t-shirts, and tight fitting jeans. During the full moons, she took on the appearance of a large wolf with glowing yellow eyes and various shades of grey and tan fur.

Jules possessed all the standard powers and abilities of a non evolved-werewolf. Although, it should be noted that she temporarily managed to establish some form of control while in wolf form. Jules was capable of tracking Damon back to the Salvatore Boarding House, where she intended to kill him, but ended up biting Rose-Marie instead. After losing control during her confrontation at the Boarding house, Jules, while in her primal animal state, made it to the woods, where she ripped apart a group of campers.

Jules had the typical weaknesses of a non evolved-werewolf.

Jules was in a romantic relationship with him. They cared about each other, but they were ultimately killed by vampires.

Mason and Jules were in contact before Jules met Tyler. Mason asked her to watch over Tyler and mentor him as a newbie werewolf. Although the two had rough patches, especially while Tyler was still dating Caroline Forbes, they eventually grew closer in friendship as Jules taught him their werewolf ways. 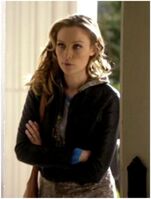