Jules' Pack was a pack of werewolves from Miami, Florida.

Information about the pack's history prior to their arrival to Mystic Falls remains unknown. The first member of the pack to arrive to Mystic Falls was Mason Lockwood, who left without telling his pack where he was going. Though his public reasoning for returning to his hometown was to attend his brother Richard Lockwood's funeral, it was later revealed that he was also secretly seeking out the moonstone for his lover, Katherine Pierce (whom the pack knew as "Kathy.")

After Mason's extended absence, the pack's Alpha, Jules, came to Mystic Falls to look for him. Her first stop was the Lockwood Mansion, where she met Mason's sister-in-law Carol and his nephew Tyler and informed them that Mason hadn't returned to Florida as they originally believed. In reality, Mason had been killed by Damon Salvatore after it became clear that he was working with Katherine. Once Jules figured this out, she summoned the rest of the pack to come join her in avenging Mason's death, and made sure they had enough numbers and weapons to fight off any vampire in town who confronted them.

In Daddy Issues, Jules' lover and second-in-command, Brady, met up with Jules, where they discussed the pack's intentions. Though Jules wanted to get revenge on Damon and Stefan Salvatore, she was more concerned with convincing Mason's newly-triggered werewolf nephew Tyler into joining their pack, as she believed it was their duty to help him learn about what it means to be a lycanthrope. However, Brady insisted they could do both, and they decided to get back at the Salvatore brothers by kidnapping Caroline Forbes, a newly-turned vampire and friend of theirs. Stefan inadvertently took Tyler hostage in an attempt to convince him that they didn't have to be enemies, leading Jules to call him and arrange for a hostage exchange.

Later on that night, Stefan and Jules met up outside of Brady's trailer to exchange Tyler for Caroline. However, during the meeting, Damon arrived and stated that he would attempt the hostage exchange using Stefan's "peaceful" plan before reverting to his more violent alternative, mistakenly believing that he and Stefan would only be fighting Jules and Brady. However, Jules then whistled, causing a dozen fellow werewolf packmates to surround the Salvatore brothers. After Brady demands that the vampire who killed his friend Mason identify himself, Damon reluctantly confessed to killing him, which led to a violent fight to break out. Several of Jules' pack members were killed in the battle, but before Stefan and Damon could be killed by the werewolves, a self-described "warlock" named Jonas Martin, who was employed by the Original vampire Elijah Mikaelson, appeared and cast a pain infliction spell on all of the werewolves until they were knocked unconscious. Jonas then informed Stefan, Damon, and the recently-freed Caroline that he was there to ensure that Elijah held up his end of his deal with Elena Gilbert by protecting them in exchange for her cooperation. Jonas instructed the vampires to leave, and once they were gone, Jonas then turned to Tyler and warned him to tell Jules' pack to leave town as soon as recovered.

After the werewolves woke up, Tyler joined Brady, Jules, and Stevie in the trailer for a drink. When Brady mentioned he didn't understand why Mason stuck around a vampire-infested town in the first place, Jules suggested it was because his brother died, but Tyler ended up revealing that Mason was looking for a moonstone.

In Crying Wolf, the surviving pack members and Tyler burned the bodies of their fallen as they discussed the moonstone and how they believed it to be crucial in breaking the so-called "Sun and Moon Curse"—according to legend, the moonstone and a doppelgänger could be used to break the werewolf aspect of the curse and would allow werewolves to turn whenever they wanted, or not at all. Stevie then mentioned that Mason had been secretly dating a vampire named "Kathy," who was actually Katherine, and this led him to believe that she was the reason why Mason wanted the moonstone. When Stevie showed Tyler a picture of Katherine, Tyler mistook her for Elena and said that he could help them find her. The pack then made a plan to find Elena and the moonstone; however, Jules and the pack kept the fact that Elena would have to be killed in order to break the curse hidden from Tyler to ensure he wouldn't interfere with their mission. Once their plans were finalized, the pack split up to seek out the ingredients they needed to break the "Sun and Moon Curse"—Brady and Tyler went to the Gilbert family cabin at Dunham Lake where Elena and Stefan were camping for the weekend, since Tyler had been there before, while Jules, Stevie, and the remaining werewolves headed toward the Salvatore boarding house to get the moonstone from Damon.

At the boarding house, Stevie, Jules, and the other wolves launched a sneak attack, which resulted in Stevie stabbing Alaric Saltzman in the stomach and "killing" him, though he did not know that Alaric was wearing a Gilbert ring and would be brought back to life after dying at the hands of a supernatural being. Stevie then caught Damon off-guard and injected him with a full syringe of vervain that knocked him out. When Damon reawakened, he realized he had been bound to a chair and has a collar with dozens of sharp wooden spikes embedded in his neck that prevented him from moving. Stevie and Jules demanded Damon tell them where the moonstone is and threaten to torture him further, but before they could seriously harm him, Elijah appeared with the moonstone in hand. The werewolves looked at him warily as Elijah set the stone on the nearby table and invited them to take it, but when two of the wolves tried to do as he asked, Elijah quickly killed them. Stevie surrendered immediately afterward and Jules ran away, allowing Elijah to free Damon. Elijah then reminded him that this was the second time he had saved his life from this pack and suggested that Damon should stop fighting against his deal with Elena.

Meanwhile, Brady attacked Stefan with a shotgun full of wooden bullets while the vampire was gathering firewood outside. Brady then left the gun with Tyler so he could go after Elena, and instructed Tyler to kill Stefan if he tried to fight back. When Stefan insisted that Tyler didn't have all the information, the young werewolf was hesitant to believe him, but once Stefan revealed to him that the doppelgänger had to die to break the curse, Tyler realized that Jules and the others had lied to him and helped Stefan to recover from his wooden buckshot wounds. Shortly afterward, Brady ultimately died while trying to capture Elena, and Jules and the surviving members of her pack finally decided that they needed to leave town. Tyler, overwhelmed by all of the conflicting information he had received since triggering his werewolf curse, decided to join Jules' pack and left for Florida with them to live among the wolves and learn how to live like one.

In The Sun Also Rises, Tyler and Jules returned to Mystic Falls on the morning before a full moon after Tyler had received a voicemail from his mother telling him that she had fallen down the stairs and been hurt so badly that she was hospitalized. However, unbeknownst to Tyler and Jules, Carol had actually been purposely hurt and mind-controlled into calling Tyler so that Niklaus Mikaelson could use him perform the ritual to break his hybrid curse, for it required him to sacrifice a werewolf, a vampire, and a human Petrova doppelgänger. Just as Jules and Tyler had left the hospital to chain themselves up in preparation for their transformation that night, Tyler (along with Caroline, who had crossed paths with him when she went to visit his mother) was captured by a witch associate of Klaus' named Maddox. When Caroline and Tyler were freed by Damon later that day, Klaus then captured Jules to use as his werewolf sacrifice instead. That night, Jules' transformation was magically decelerated by Greta Martin until it was time for the sacrifice, and the second she transformed into a wolf, she lunged at Klaus, who easily ripped her heart out of her chest. It is unknown if any other members of Jules' pack still survived after Jules' death, nor is it known whether or not the surviving members, if any, remained together in a pack or joined another. It is presumed they are one of the 7 packs whose venom Lucien used for his spell.

Jules is thought to be the Alpha of this pack, since she was shown to be the most experienced when it came to lycanthropy and appeared to hold the most authority of anyone else in the pack. This assumption is supported by the fact that Jules made the final decision to encourage Tyler to join their pack and admitted she felt as though she had a duty to teach Tyler to control his new condition. The second-in-command of the pack seemed to be Brady, as he was shown to be Jules' closest adviser with regards to pack matters.

Tyler Lockwood †
Add a photo to this gallery 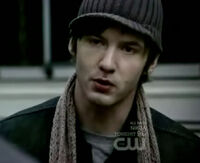 Retrieved from "https://vampirediaries.fandom.com/wiki/Jules%27_Pack?oldid=2767163"
Community content is available under CC-BY-SA unless otherwise noted.