watch 02:24
Vampire Diaries Lore: Julian
Do you like this video?
Play Sound

Julian was a recurring character and major antagonist in the seventh season of The Vampire Diaries. He first appeared in the third episode of the season. He was a vampire who was turned in the early 1500's, and he has been the lover of Lillian Salvatore for over a century and a half. Julian was eventually killed by Rayna Cruz in 1903, and his soul was sealed in the Phoenix Stone in punishment until Lily and the Heretics were able to use the stone to resurrect him in I Carry Your Heart With Me. He is also the person who killed Stefan and Valerie's unborn child, and almost killed Valerie in the process.

After Lily died, Julian, who blamed the Salvatore brothers, kills Damon with the Phoenix Sword. After Damon and Stefan are brought back to life, Julian takes amusement in their torments from the Phoenix Stone. After being fed up of Julian and his past actions, Stefan uses Valerie to hold him down with magic, while Stefan then drives a stake through his heart, permanently killing Julian in revenge.

Julian was turned in the early 1500's by an unknown vampire and is over 475 years old. He lived in many towns in his life including Ridley Park, Old Saybrook, and Sunbury, befriending and turning many people into vampires along the way. He eventually met and fell in love with Lillian Salvatore, joining her with her family of Heretics.

Julian attacked a village in Saint Malo, Louisiana. He was confronted by a vampire hunter and member of the Brotherhood of the Five named Vicente Cruz. Julian was initially unaware of his identity and prepared to kill him but was interrupted by Vicente's daughter, Rayna Cruz, who tried to convince Julian not to kill her father, telling him that he'd suffer from the Hunter's Curse if he did. Julian, amused by nearly falling victim to it, decided to avoid it by compelling Rayna to do the actual killing, forcing her to kill her own father.

Julian, along with Valerie Tulle, was sent to Mystic Falls on Lily Salvatore's orders, in order to check in on her son, Stefan, as she wanted to ensure his happiness and safety before their new family (comprised at the time of Lily, Julian, Valerie, and Oscar) left for Europe. During the Mystic Falls County Fair, Julian blended in by running a kissing booth where the profits would go to Confederate soldiers. Many women were taken aback by his charm and paid a penny for the opportunity to kiss him. He then saw Valerie sitting with Stefan and joking around with him. Julian approached them and interrupted their game. Stefan incorrectly assumed that Julian was Valerie's father before Julian pulled Valerie aside and reminded her that they were supposed to keep their distance from Stefan, only getting close enough to watch him without any direct interaction. Valerie, enjoying Stefan's company, assured him that she had everything under control.

However, Valerie continued to befriend Stefan, much to Julian's annoyance. When he tried to interrupt again, Valerie used a cloaking spell, fueled by the magic within an amulet intended for emergencies, to hide her and Stefan, allowing them to leave the fair and go into the woods to make love. That night, Julian tracked them down at Lily's grave, expecting Stefan would visit there at some point. Julian angrily took Valerie away, reminding both of them that the two of them were leaving for New York.

On the day they were preparing to leave New York Harbor for Europe, Valerie tried to sneak away but was caught by Julian. Despite Valerie not wanting to leave, Julian told her that she had to since Lily wouldn't go anywhere without her orphans and that it was imperative that he leave the United States. Julian revealed that he could hear both of the heartbeats in Valerie, asking if Stefan knew that she was pregnant with his child. When she begged him not to tell Lily, he smugly said that she had her reasons for staying and he had his for leaving before slapping her across the face and then beating her senseless until she was nearly dead, killing the unborn child inside of her in the process. After Julian brought Valerie with him onto their ship to England, Julian told Lily that he had found Valerie left for dead in the streets after she had been robbed and beaten by criminals, Lily believed his lies and Julian was confident that Valerie wouldn't tell the truth of what happened because there was no way she could expose him without also exposing herself and her relationship/pregnancy with Stefan as well.

In 1897, Julian was responsible for what came to be known as the Black Sea Massacre, where he wiped out an entire coastline of people on Christmas Day. According to Valerie, Lily continued to love him blindly in spite of this excessive violence.

In 1903, while spending a night with some of the Heretics, they were ambushed by vampire huntress,  Rayna Cruz, who wanted revenge for when Julian forced her to kill her own father. She stabbed Beau in the throat and marked him with her enchanted sword. Julian tried to defend his friends and managed to temporarily overpower Rayna. He bought them enough time to flee, and prepared passage to flee Europe with Lily and the others. Julian came up with the idea to travel in boxes across the sea as it would be the least conspicuous, much to the Heretics' protests.  However, Rayna tracked them down using the mark her sword had made. Julian again tried to fight her and nearly killed her, stabbing her in the chest.

As he got back on the carriage to run with his friends, Rayna threw her sword at him, impaling him. Upon his death from her enchanted sword, his spirit was trapped inside of the Phoenix Stone in the sword's hilt. Afterward, the Heretics preserved his body with magic in hopes that they could someday regain the stone, and use it to bring him back to life. Unfortunately, when the Gemini Coven trapped Lily and the Heretics in a prison world upon landing in America, the stone was lost as it fell into the sea upon their ambush, and they were forced to put their plans to bring Julian back on hold for the time being. Julian's spirit, meanwhile, was suffering inside the hell-like world of the Phoenix Stone. While imprisoned in the stone, Julian was forced to kill Lily every day, after being given hope for escape, only to wake up and live the day over again for a century. Julian stated time loses meaning in the stone, and relieved his own hell for what felt like eternity.

It's unknown Julian's personality before turned into vampire. However, since vampirism is known for amplifying a human's personality and traits, it can be assumed he was a less-intense version of who he became as a vampire.

Described as a feared, storied immortal with a reputation for excelling in earthly pleasures. Julian was pure charisma or pure creep, depending on whom you ask. The one thing he fears was Rayna, an unlikely outcome given that he's perpetually on the run, leaving chaos in his wake, and attracting even more dangerous followers. Julian's abusive, dominant, and violent behavior during his physical disciplinary beating of the Salvatore brothers eerily reminded them of their father, Giuseppe Salvatore. He had also demonstrated his willingness to do whatever it takes to get what he wants. An example of this temperament was when he purposely beat Valerie to the point of having a miscarriage in 1863 after she tried to leave the family, because he knew that Lily would be so worried about her that it would turn her attention away from him and would delay the business he needed to attend to in England. Another characteristic he has shown was a fondness for manipulating people with his charm, such as when he suggested that Mary Louise had "lost her swagger" and had begun to bore Nora as a result of this in order to goad her into feeding on a caterer with him. Julian despised solitude, and as a result often made sure to surround himself with others to gratify himself. Initially, he did so by often turning people he met to be his friends and companions through his immortal life but after meeting and falling in love with Lily, he inserted himself into her "family" of Heretics. However, Julian always needed to be praised and admired by his peers, lashing out at anyone who disagreed or disrespected him. He felt the need to be in charge of whatever group he was with, using his charm and intimidation to bend people to his whim. Julian was very protective of those he considered his friends and family, not wanting to see any harm come to them unless they crossed him. His need to be in a group may have stemmed from him being an only child. Despite his fears, Stefan and Valerie made sure he died in isolation, where none of his friends could help him. Julian prided himself on being a sportsman, thrill-seeker, and having a love of games. He used challenges and games to create some semblance of false order in his violent life. He enjoyed one on one competitions like fencing, pool, racing, and sparring to help settle decisions he made, though most of his games were fatal and only fuel for his own enjoyment. After taking over Mystic Falls, he and his friends would do nothing but play and revel in their own hedonism. Julian even used the fight club he created to decide who lived in which home in the town. However, Julian enforced rules to all of his games and was quick to anger when those rules were broken. Despite being hostile and violent prior to his entrapment in the Phoenix Stone, he grew far more volatile once he had been revived. He could quickly go from calm and collected, to enraged, unable to restrain himself. Lily was said to be the only tether to his sanity and upon her death, his condition was made even worse, no longer caring about any consequences or having to hold back on any of his violence.

Julian was a spirit who had been trapped inside the Phoenix Stone since 1903. Since he retained most of his vampiric personality, it can be assumed he remained the same personality-wise as a vampiric spirit. However, Julian stated how horrified and scared he was to be in the stone, due to his hallucinations of killing Lily over and over again.

"A lot better-looking than our old man, I'll give Mom that."
—Damon Salvatore about Julian's appearance in Live Through This

Julian was a handsome dirty blond-haired, blue-eyed man with a signature wicked grin who appeared to be in his mid-to-late 30s. Due to the formal dress that was characteristic of upper-class men in the centuries before his imprisonment, Julian was usually seen wearing a suit of some kind. A bore a scar in the shape of an "x" near his heart that he received from being stabbed by the Phoenix Sword.

Julian possessed all the standard powers and abilities of a non-Original vampire. But being over 475 years old, Julian possessed more strength and speed than regular vampires such as the Salvatore brothers, who are only 166 and 173 years old, respectively. He was a fierce combatant, as evidenced when he gave into his rage and was unable to stop mercilessly beating Damon and Stefan after he effortlessly threw them both across the bar. He later easily overpowered Damon in a fistfight. He was incredibly proficient in swordplay, able to defeat Enzo in duel and being superior to Beau, who is also quite skilled.

Julian had the typical weaknesses of a non-Original vampire. 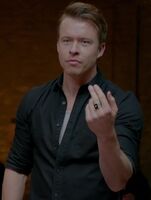 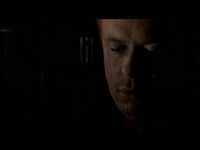 Retrieved from "https://vampirediaries.fandom.com/wiki/Julian_(Season_Seven)?oldid=2780772"
Community content is available under CC-BY-SA unless otherwise noted.