KATHERINE'S PAST IS REVEALED — Elena puts herself in a dangerous position as she searches for the truth about Katherine's past and what her own future may hold. Knowing that Stefan would never agree to her plan, Elena swears Caroline to secrecy. Damon uses a new-found confidant to help him try to discover the real purpose and power of the moonstone. Jeremy and Bonnie meet Luka a new student with a surprising family history.

Jeremy helps and then asks her if she wanted to play pool at the grill. Bonnie agrees and then a new guy asks them if they know where the office is. Jeremy introduces Bonnie and himself to the new kid who is named Luka. Jeremy ends up taking Luka to the office. Meanwhile, Caroline and Elena are walking through the woods and going to Fell's Church to talk to Katherine who resides in the tomb beneath the ruins.

Elena tells Caroline not to tell anyone about her going to the tomb. They go down and Caroline opens up the stone door. They wait as a weak and very pale Katherine appears. Elena tells Caroline to leave and stall Stefan. Elena gets out her equipment, a bottle of blood and the Petrova book. Katherine tries to run to get it, but the spell cast over the tomb stops her from getting out.

Elena makes a deal with Katherine that she will give her blood and the book for information, so Katherine begins telling her about how she was chased by Klaus and how she was turned into a vampire. In a flashback, Katerina is seen racing through the woods, clutching the moonstone in her hand. She is being followed by vampires led by Elijah. She stumbles and cuts herself when Trevor arrives and points Elijah and his men in another direction. Trevor then instructs Katerina to go to a cottage were Rose is hiding. Rose allows Katerina in, but when she realizes that Katerina has the moonstone, she locks her away after feeding her blood so she could heal.

Katerina, however, got hold of some rope and when Trevor arrived, he and Rose heard a noise from the room and once they entered, they found out that Katerina had hung herself. When she aroused, she drank human blood, and Trevor is devastated that she had used him. Meanwhile, Bonnie steps into the grill, but she can't find Jeremy. Luka and Jonas (Luka's dad) ask Bonnie if she will join them. Bonnie then finds out that Luka and his father are warlocks, the term for a male witch. Meanwhile, Rose and Damon go meet Slater, an old friend of Rose to find a way to contact Klaus.

Elijah, outside the store throws quarters into the window which shatters, allowing the sunlight to enter. Everybody in the store screams including Rose, who doesn't have a daylight ring. They escape as Rose heals. Rose cries that Klaus is getting his revenge. Caroline couldn't stall Stefan for long and so Stefan goes to the tomb and finds Elena waiting for Katherine to reappear. Stefan says that Elena shouldn't have been here and that all the things Katherine said was a lie.

Katherine reappears and tells them that Klaus is going to kill everybody Elena knows if she tries to run away from what he is up to, just like he did to her entire family. Back at the Salvatore Boarding House, Damon sits at the fire, then Rose comes and they make out. Later, Rose gets a call from Slater who says she needs a witch and the moonstone to stop the sacrifice of a Petrova doppelgänger. The phone call ends and standing behind Slater is Elijah, who then compels him to stake himself, justifying it by saying it was necessary. Jonas then appears saying: "Was it really?" Katherine remains in the tomb reading the Petrova book. She stares down tearfully at a sketch of herself with her parents.

Katherine: "Better you die than I."

Rose: "Being in love with your brother's girlfriend must be difficult."
Damon: "I'm not in love with anyone."
Rose: "Wanna try that again?"

Caroline: "You have a friend?"
Stefan: "You say that with such a discouraging amount of surprise."

Katherine: "Witches and their spells. So many ingredients. So many people to sacrifice."

Katherine (to Elena): "He killed them. My entire family. Just to get back at me for running. Whatever you do to escape Klaus, he will get his vengeance. Your friends, your family and anyone that you've ever loved."
Katherine: (to Stefan): I don't want my freedom, because when Klaus comes to kill us— and he will come— I'll be safe in the tomb, where no vampire will enter because they can't get out. I'll be the safest psychotic bitch in town.

Katerina discovers that her mother was killed. 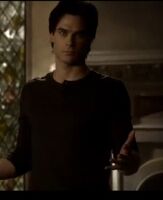 Retrieved from "https://vampirediaries.fandom.com/wiki/Katerina?oldid=2785642"
Community content is available under CC-BY-SA unless otherwise noted.