Kelly Donovan was Matt and Vicki Donovan's mother. During her short return to Mystic Falls, she was shown to be an irresponsible mother. In the end, Matt suggested that she leave Mystic Falls for good and she reluctantly listened to him. She was living her own life, out of touch and removed from Matt's life.

After making a brief return in We're Planning a June Wedding, Kelly reunited herself with Peter and Matt in the Mystic Grill, a day before they all were to attend Stefan and Caroline's wedding. However, it is later revealed that she was working for Katherine Pierce and has been dead for awhile now. After figuring out her involvement with Katherine and after she attempted to arrange a devastating gas leak explosion, Kelly was questioned by Damon and Matt and they found out about Katherine making her comeback through Vicki, and then died once again as she collapsed to the floor in a bloody coughing fit.

Kelly was a member of the Donovan Family.

Kelly Donovan grew up in Mystic Falls and she was best friends with Elena and Jeremy's mother, Miranda Sommers, while in high school. During that time, she dated a guy who she described as "not impressive," who later became a plumber. Kelly would later win a date with this same man in a charity raffle. She used to babysit Jenna Sommers, who was Miranda's younger sister and they became good friends who partied together once Jenna was old enough.

She and Miranda remained good friends after Miranda married Grayson Gilbert, and their children Matt Donovan and Elena Gilbert sometimes used to share a crib when they were babies. Kelly also had a daughter, her oldest child who was named Vicki. Several years later, Kelly left Mystic Falls with her boyfriend Pete and left Matt and Vicki to fend for themselves.

Sometime before she left town, she had been working at the Mystic Grill; however, she was fired when Kelly slept with the boss' boyfriend. She was gone for an unknown amount of time with her boyfriend Pete, and she eventually returned to Mystic Falls after Pete supposedly broke up with her. When she entered the living room, she found her son Matt on the couch, making out with his new girlfriend, Caroline Forbes.

She was seen to be extremely immature, to the point that it was up to Matt to continue paying their bills with his paycheck from working as a busboy at the Grill. After returning to town, she hooked up with many men who appeared to be half her age. After Matt asked his boss to get his mother's job back, Kelly went to the Mystic Grill for an interview with the manager, but was ultimately stood up. It was then that she met Damon Salvatore and was reunited with her old friend Jenna. Kelly and Damon flirted throughout the night until Damon brought her home with him to the boarding house. They began making out in the foyer until they were interrupted by Matt, who walked in on them in the act and who quickly became angry at his mother for acting like a teenager while he was forced to be the adult in the family.

Kelly openly disapproved of her son's relationship with Caroline, even telling her face to face that she thought Caroline was fake and that she did not like her. In Under Control, Kelly got drunk at a party at the Lockwood Mansion and made out with Tyler Lockwood, which was once again interrupted by Matt catching them, causing Matt to lash out at Tyler and get into a vicious fight. When Kelly returned home, Matt had packed up all of her things and had insisted that she leave the house, as he was tired of continuing to give her more chances when she didn't deserve them. She was upset, but left as she was asked.

In We're Planning a June Wedding, Kelly returns to Mystic Falls after four years' absence, something that Matt blames her for. They talked a little bit later, and she assured him that she really changed since the last time they saw each other. She then told him about her regrets of not being a good mother and for not having protected Vicki. She then went to the restroom, where she began suddenly vomiting black blood as a result of getting old, dying, going to hell and coming back to life. Though there's a short-term remedy. She takes out a knife and slits a girl's throat, seemingly feeding on her blood. The day after, she attends Stefan and Caroline's wedding and meets with Peter, asking him about the knife made of Katherine's bones, which surprised Peter who thought that Matt told her everything about the supernatural world in order to be closer to her. When he tells her that the weapon was already in Stefan's hands, Kelly attacks him with her knife.

During the ceremony, Kelly receives a "Game On" message from Vicki and storms out of the place. She enters the Lockwood house, trafficking a gas cylinder to make a huge explosion. She then returns to the dinner party when she makes a toast to Stefan and Caroline, mocking Caroline's efforts to try to cure her mom's cancer before failing. She than openly accuses Damon of making Vicki's last moments on Earth painful. Damon tries to compel her, but she resists. She then blames everyone for forgetting her, especially her own son, revealing that two years ago she fell during an accident and died. She then went to Hell where the only one she found to help her was Katherine. When Damon threatens her and asks her about Katherine's location, she simply answers that she doesn't really know, because she was trafficking the gas cylinder.

Finally, interrogated by Damon and Matt, Kelly reveals that Katherine promised her only void, emptiness and oblivion, a fate she'd vastly prefer over any other. She only reveals that Katherine intends on freeing hellfire to burn Mystic Falls to the ground. When Matt retorted that only he or his father could ring the Maxwell Bell, she then reminds him that he's not her only child and reveals that Vicki is actually alive, having escaped Hell with the intention of ringing the Bell. When Vicki begins ringing the bell, Kelly collapses dead on the ground. 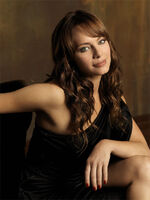