Kieran O'Connell was a priest with a dark past. According to Kieran, his parish was once the heart of the neighborhood until a massacre happened inside the church. Kieran takes vervain and knows about the vampires, including the Original Vampires. While Kieran generally did not interfere with Marcel's affairs, he drew the line when it comes to the welfare of the humans in the community. Kieran was an ally of the witches until they betrayed him.

He was the leader of The Faction, a group of humans in New Orleans who deals with the vampires and the witches for the humans. However, after the witch Bastianna Natale placed a hex on him as revenge for having helped stop the Harvest, Kieran starts to lose his mind gradually with a murderous rage starting to take hold. As a result, the Faction removed him as their leader and chose Francesca Guerrera to replace him until he recovered. After being turned into a vampire failed to relieve him of the hex, he was staked and put out of his misery by Klaus.

Kieran is a deceased member of the O'Connell Family.

Kieran was the priest of the St. Anne's Catholic Church in New Orleans. According to his friend, the vampire Marcel, who led the vampire faction of the town, Kieran came to the town young before he became a priest and knew how to party. Later, after taking his vows, Kieran took up his family's legacy of leading the Human Faction in dealing with the various supernatural species in New Orleans.

Kieran formed a working relationship with Marcel which eventually turned into somewhat of a friendship. Despite this alliance, Kieran could do very little to prevent Marcel from worsening the already high tensions between the werewolf packs, such as the Crescent Wolf Clan, which eventually led to the exile of the wolves from New Orleans and into the Bayou. However, working with Marcel, Kieran was able to save the young Andrea Labonair, who later came to be known as Hayley Marshall, from her family's enemies. The daughter of the leaders of the Crescent Wolves, her parents were betrayed and killed but she was saved by Marcel and sent out of town thanks to Kieran.

Kieran was also an ally of the witches of the French Quarter but it is unknown if he had any kind of similar relationship with the covens living outside the Quarter under the stewardship of an Elder named Josephine LaRue. At some point, Kieran began stockpiling an arsenal of dark objects (most of them having been created back in the early days of the 20th century by witches loyal to Kol Mikaelson) to be used by the humans in the even of a supernatural war in New Orleans. He also researched the history of the New Orleans human families and discovered the long-kept secret of the Correa family: they were secretly werewolves descended from the crime family known as the Guerreras and who Marcel had supposedly exterminated in the 1920s. Kieran hides the proof in his storage room where he kept the dark objects. He also allowed the Correas to remain in the human Faction, although apparently at arm's length, due to their past and to their present associations with the drug trade and organized crime.

Kieran had a brother who fathered twin children: Sean and Camille O'Connell. Kieran was very close to his niece and nephew, and Sean was in seminary to become a priest, like his uncle. Kieran also began grooming Sean to one day take his place as the leader of the Faction although how much he told him is unclear.

One day, a witch named Sophie Deveraux came to him and told him that the witches of New Orleans were planning on completing a dangerous ritual known as the Harvest which would involve sacrificing four witches to renew the coven's connection to magic. The witches believed that the girls would be resurrected afterward but Kieran did not believe it and tried to stop it. He confronted the witch Elders Bastianna Natale and Agnes, and tried to talk them out of it, declaring that such an action would lead to open war with the vampires. The witches refused to back down and Agnes put a hex on Sean to distract Kieran. The priest watched as his nephew slowly lost his mind before killing nine of his fellow students and himself in front of Kieran's eyes. Distraught by the loss of his nephew, Kieran left New Orleans but not before telling Marcel about the Harvest and asking him to stop it.

He is quite a brave person for a human. This is evidenced by how he stood up to the witches that wished to do the Harvest Ritual, has continually stood up to Marcel and the vampires, and even Klaus himself. Kieran will not hesitate to speak his mind before anyone and will not allow anyone to step on his toes, an act which has earned him Klaus's respect.

Like Elijah, Kieran is also very principled, he maintains the Faction functional in order to protect New Orleans and its inhabitants, whilst the other members only seem interested in serving the supernatural community in exchange for the money they provide.

He is also shown to be protective of his relatives. When he found out Agnes was the one responsible for Sean's suicide, he wanted her to suffer. He also agreed to Klaus' offer to protect Cami. He was very worried that his niece, Camille, would be hurt by Marcel.

Despite the strained relationship between him and Marcel, the latter considered him to be a good man and a friend.

Tall, dark, understated, and attractive, though his looks and demeanor are somewhat world-weary (perhaps due to seeing too much death and sorrow).

Kieran possessed all the standard powers and abilities of a non-Original vampire.

Kieran had the typical weaknesses of a non-Original vampire.

Kieran seems to care about his niece, as he warns Marcel to stay away from her out of concern for her safety. Kieran also tries to help her move from what her twin brother did. Kieran later tries to help his niece with her troubles and asks her to leave town as there may be a war coming. Camille later calls her uncle and explains the picture she found of 1919 wasn't just a coincident and says she might go crazy soon if she doesn't find answers soon. Kieran worried for Camille's safety tells Klaus to compel her to leave New Orleans for good.

When Kieran first met with Klaus, he appeared to not to be afraid of the Original Hybrid, but made a deal to get Sean's killer and the protection of his niece. Kieran seems to get along with the Original Hybrid. and tries to convince his niece of getting out of town when Klaus warns him of a coming war. Once Klaus becomes the new king of New Orleans Kieran calls a meeting to introduce Klaus to the faction and when Klaus tells Kieran he needs his Werewolf family to be protected from the Vampires, he says will protect them but he wants his niece out of town now and tells Klaus to compel her. Kieran was also the first person Klaus went to in order to combat the potential disaster caused by Davina's powers forcibly returning to New Orleans soil. Klaus was concerned for Kieran when he was hexed by the witch Bastianna and tried to help him, first by compelling him and then by leveraging the live of Monique to force Bastianna to undo the hex, though it led to him being captured by the witches, and tried to save him using his relationship with Genevieve only to make her decide to let Kieran die slowly and painfully. He felt remorseful over this and tried to make Cami cease her attempts to save him as it was only making him suffer more, acknowledging Kieran as a good man who doesn't deserve it. Although Klaus turned him into a vampire, albeit reluctantly, knowing fully well that Kieran would rather die, Kieran didn't held it against him and only asked that he leave him and Cami to speak alone, as they both know Kieran would accept death over being a vampire. When it turned out Kieran's hex returned even as a vampire, Klaus mercy-killed Kieran, though he sadly told Kieran that he deserved far better than this, and out of respect for Marcel's friendship with Kieran, allowed him to return to bury his friend.

Kieran and Marcel Gerard seemed to have been friends as they worked together to maintain the peace in New Orleans during Marcel's reign and both of them trusted each other, as shown by how Marcel had Kieran get the young Andrea Labonair, who later came to be known as Hayley Marshall, from her family's enemies and Kieran Kieran told Marcel to stop the Harvest and Marcel willingly obliged, though he failed and only saved Davina, afterwards the two of them agreeing to get her out of town after the Harvest. Although Marcel seemed sympathetic to Kieran leaving the town due to his nephew's massacre, after Kieran's return, his knowledge of how Marcel has been using Davina and Marcel's relationship with Cami strained their friendship, as Marcel is exasperated by Kieran's authoritive demeanor and Kieran, unintimidated by Marcel as he calls the shots with the humans and thus Marcel knows better than to make him his enemy, outright opposes Marcel and warns Marcel to stay away from his niece or there will be consequences. Despite the strain in their friendship, however, Marcel speaks only good of him to Klaus so he'll spare him after Klaus murders the whole Human faction representatives and was worried for Kieran after he had been hexed by Bastianna, attempting to encourage him to try to break the spell, and was saddened by Kieran's death and attended his funeral, where he led his memorial.

Kieran: "This is the body. This is the blood. May they cleanse me of sin and preserve my soul in life everlasting."
Cami (to Kieran): "I'm sorry. I just couldn't lose you, not like that. I made Klaus give you his blood."
Kieran: "I see. So the devil has a deal for me, after all." 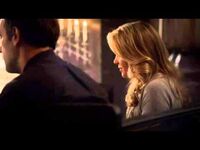 Retrieved from "https://vampirediaries.fandom.com/wiki/Kieran_O%27Connell?oldid=2780786"
Community content is available under CC-BY-SA unless otherwise noted.