Kill or Be Killed

MASON'S PAST IS REVEALED — Tyler learns more about the Lockwood family curse from Mason. Stefan and Damon argue over how to handle Mason. Elena tries to keep Jeremy from becoming more involved with the Lockwood mystery, but Jeremy makes an effort to hang out with Tyler and Mason gives Sheriff Forbes some startling information, leading to a night of violence, confessions and heartbreak.

In this episode, the short flashback is taking place one year ago, showing how Mason accidentally killed his friend Jimmy in a fight. Mason tells Tyler the story. It is Mystic Falls Historical Society Volunteer Day. Stefan tries to make peace with Mason. Despite a somewhat reconcilable conversation, it is obvious that Mason is still out for Damon.

Mason tells Sheriff Forbes that Damon and Stefan are vampires, but she doesn't believe it. Stefan and Elena continue to make everyone think that they are in a fight. Caroline believes this, but Damon does not. Damon drinks some lemonade and topples over, because Mason spiked it with vervain. Sheriff Forbes watches everything go down and calls for backup. As she leaves, Caroline confronts her. Caroline sees how distressed her mom is and becomes curious, so she decides to eavesdrop on her mother's surroundings. Stefan and Damon corner Mason in the woods. Just when they were about to kill him, they get shot by wooden bullets. Liz and her deputies run over and inject them with vervain and take them into the cellar. Caroline hears all this and runs to tell Elena. They arrive and stop deputies from staking Stefan and Damon. Damon drinks their blood, but Stefan refuses. Liz sees all this go down. Caroline pleads with her to keep this a secret. Liz does not accept her daughter being a vampire. Damon gets close to killing Liz, and then decides to keep her in the cellar until all the vervain leaves her system, so she can be compelled to forget about everything. On Caroline's way out, she overhears Liz say that Caroline is not her daughter anymore. Elena thanks Damon for not killing Liz. Damon tells Elena that Stefan didn't feed on the blood.

Elena cuts her hand and offers her blood to Stefan. He feeds on her a little. Jeremy and Tyler were hanging out with Sarah and Aimee at the Lockwood Mansion. Sarah asked to see Jeremy's sketches. They were all pictures of wolves. Tyler takes Jeremy aside and confronts him. Jeremy admits he knows about the Lockwood secret, then he spills everything he knows about Mason, the moonstone and the curse. Then Sarah jokingly took it. Tyler is furious and pushes her accidentally down the stairs and wrestles the stone back. Tyler is shaken up by his actions and later tells Mason what happened and hands over the moonstone. Mason gets into a car that Katherine is driving. It turns out that he works for her. He hands her the moonstone and they share a kiss. He thinks that Katherine loves him, not knowing about her history with Damon and Stefan.

Damon: "What are you doing?"
Stefan: "Negotiating peace on your behalf."
Damon (complains): "But I don't want peace!"
Stefan: "Huh. Consider it opposite day."
Damon: "Stefan, please tell me you don't seriously think a handshake just solved our problem."
Stefan: "No, actually, I think that the first chance Mason Lockwood gets, he's gonna drive a stake through your heart, and then through mine. All because you took it upon yourself to try and kill him. So thank you, 'cause we don't have enough problems."

Damon (to Elena): "Hey... Stefan didn't drink the people blood. But he needs to. And deep down, you know that."

Stefan: "Okay how about this? Today, when we`re fighting, if I say 'I can`t do this anymore, Elena,' what I really mean is that I love you."
Elena: "And when I say 'Fine, Stefan. Whatever,' that'll mean that I love you, too." 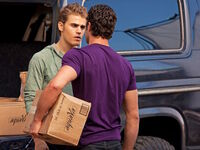 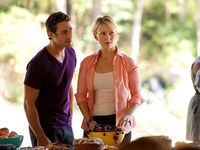 Caroline in the woods