Klaus' Pack was a pack of hybrids who were sired by and sire-bound to Niklaus Mikaelson. They (with the exception of Klaus) were all formerly werewolves.

They all dreaded being forced to turn on each full moon, but when they were forced to become hybrids, they didn't have to turn into a wolf unless they wanted to do so. The relief they felt from no longer having to go through their agonizing transformations made them feel incredibly loyal to Klaus for "saving" them. This loyalty was demonstrated by the pack listening to and abiding by Klaus' every command, whether they consciously wanted to or not.

As soon as Klaus broke his hybrid curse, he immediately began trying to build his pack. The episode The Hybrid marked his first attempt at creating his army, when he forced Ray to take him and Stefan to his pack, which consisting of eleven werewolves preparing for the upcoming full moon in the Smoky Mountains of Tennessee. He turned them into hybrids by forcing them to drink his blood and then snapping their necks. When they awakened, he fed them the blood of their sole human friend, Derek, to complete the transformation. However, his attempt was unsuccessful, and resulted in the werewolves bleeding from their eyes and ears before going rabid. Klaus was forced to kill some of them, and the others died on their own. After his failed first attempt, Klaus and Stefan went to Chicago to meet with a witch, Gloria, to find out what Klaus was doing wrong. In The Reckoning, Klaus returned to Mystic Falls to learn that the Petrova Doppelgänger that he had sacrificed to break the hybrid curse, Elena Gilbert, was still alive. He assumed that she was the reason why he couldn't make hybrids, but did not want to kill her again until he knew his assumption was correct.

So, in order to motivate Bonnie, Elena, and Matt to figure out what Klaus was doing wrong, Klaus gave Tyler (who then was only a werewolf) some of his blood and snapped his neck, knowing that they would want to make sure that Tyler didn't die during his transformation. Matt eventually contacted his dead sister, Vicki, who told him that the fact that Elena was still alive was the reason why Klaus couldn't make more hybrids. However, Klaus, knowing that the Original Witch hated him, decided that she was trying to trick him into killing Elena so he couldn't make more hybrids, and realized that the hybrids needed to be fed her blood to successfully complete the transition. He took Elena's blood and fed it to Tyler, making him the first ever hybrid to be created by non-magical means.

In Smells Like Teen Spirit, the gang discovered that Tyler (and the other hybrids) were sire-bound to Klaus out of gratitude that they would no longer have to go through the agony of their shift to wolf-form during the full moon. Klaus used this bond to his advantage by using his pack as both minions and bodyguards to protect him. Especially loyal hybrids included Mindy and Tony, among several others who were first seen in Homecoming. As time passed, Tyler grew to resent his sire-bond. Klaus asked him to bite Caroline to help him get back at Elena, Stefan, and Damon, but Tyler refused. Unfortunately, Tyler learned the hard way (by biting Caroline) that he had no control over his actions, and that he would do whatever Klaus wanted, whether he agreed or not. He became so distraught about the situation that he sought out the help of Bill Forbes to help break the bond. Bill Forbes instructed him to transform into a wolf as many times as he could, until he no longer felt pain when transforming. Though Tyler accidentally attacked Bill during the first transformation, he did eventually break the bond, after running off to the Appalachian Mountains to shift so he wouldn't hurt anyone. Hayley Marshall also helped him during his multiple transformations.

In Before Sunset, Klaus decided to leave town with his remaining hybrids, due to the threat of the newly-created vampire-vampire hunter. He planned on draining Elena to death, both to gain the three liters of blood that he could get in order to make more hybrids, and to kill Alaric, as his life was tied to hers. However, Tyler revealed that he was no longer sire-bound to Klaus by rescuing Elena before she could be exsanguinated to death. Before Klaus can retaliate, Tyler, Damon and Stefan (with Bonnie's help) desiccate Klaus and put him in his very own coffin that they plan on throwing into the ocean. Desiccating him, rather than killing him, removed him as a threat without killing off his vampire bloodline (which, at the time, included Katherine, Damon, Stefan, Caroline, and Bonnie's mother, Abby Bennett Wilson) It is unknown what the other hybrids did after Klaus was desiccated.

In Growing Pains, Klaus was put back in his own body and decided to leave town with his still-loyal hybrids and the small amount of Elena's blood that he had left. (Since Rebekah killed Elena in order to kill Alaric, Elena had become a vampire and was no longer a viable blood source for the hybrids) But in The Rager, he decided he to stay, after learning about the new vampire hunter in town, as he wanted to protect the few hybrids he had left. During this time, the remaining pack of hybrids, including Kimberley, Adrian, and Chris received help from Tyler and his werewolf friend Hayley to break their sire bonds for good, and they secretly formed their own pack. Klaus later killed Chris for disobedience, and to grow Jeremy's Hunter's Mark.

Although Klaus was not aware of his pack's betrayal until the mid-season finale O Come, All Ye Faithful, once he had learned what they had done, he violently killed all twelve hybrids (except for Tyler) with the Hunter's Sword he had recently found, as well as Tyler's mother, Carol Lockwood, for good measure/revenge.

Unknown to Klaus, this is exactly what Hayley and Professor Atticus Shane had intended for Klaus to do all along, and they suggested that they needed to kill twelve hybrids as part of a sacrifice. It was later revealed that Hayley was using Tyler and his pack in order to get information from Atticus Shane about her biological parents. The sacrifice eventually turned out to be part of the Expression Triangle, which would be used as a magical source of power for a witch using Expression magic. The Expression Triangle required three sites at which twelve beings were sacrificed on each site; one site where twelve humans were killed, one site where twelve hybrids were killed, and one site where twelve witches were killed. The sites needed to form a perfect, unilateral triangle.

Tyler Lockwood attempted to usurp the position in an effort to free the pack from Klaus' suppose it tyranny, however Klaus became aware of it, and chose to slaughter his pack for attempting to put him down, and banish Tyler for his treachery. 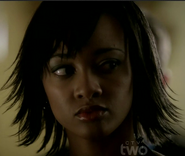 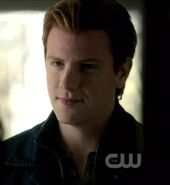 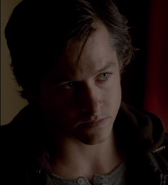 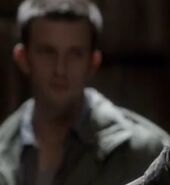 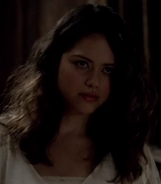 Retrieved from "https://vampirediaries.fandom.com/wiki/Klaus%27_Pack?oldid=2722370"
Community content is available under CC-BY-SA unless otherwise noted.