HIDE IN PLAIN SIGHT — Elena and Alaric both lash out at John when Isobel's unexpected arrival leaves Jenna devastated. Bonnie works with Damon and Jeremy to find the spell they'll need to harness her ancestors' power. A heartbroken Caroline doesn't know what to do about Matt. Stefan and Damon realize they have a new secret weapon.

The episode starts immediately where the last one ended. Isobel says that it is nice to see Elena again and asks Jenna to let her in, but Elena says no and closes the door. Jenna is devastated by finding out that Elena knew that Isobel was alive all along, and goes upstairs and starts to cry. Later, Alaric comes (Stefan and Damon told him about Isobel), but soon after, Jenna exits the house. Then John tells Alaric that "if he was honest with her, none of this would have happened". Alaric punches John after that. Elena tells John that this is all his fault. Meanwhile, Caroline calls Stefan and tells him Matt now knows about vampires, but she can't find him anywhere. Soon after, Stefan comes to the Gilbert House and talks with Elena. John calls them to go downstairs. Isobel is there, John had invited her in. She tells them that she has information about Klaus. She didn't find him, but she heard rumors that the doppelgänger exists. She says that she also has a safe-house for Elena, but Elena refuses it.

Bonnie, Damon and Jeremy go to the Martins' house to pick up the grimoires. Isobel arrives at her new house along with Frank. Katherine is also there. Isobel tells her that she's been busy by talking with Klaus to spare Katherine. She also tells Katherine that she didn't find Klaus, but she found one of his warlocks, Maddox. At the Salvatore Boarding House, Damon, Elena and Stefan discuss the newly found information. After they leave for the Lockwood Mansion, Katherine finds the moonstone. At the Lockwoods, Caroline asks Elizabeth Forbes and Carol Lockwood about Matt.

Isobel talks with Alaric outside the building. She said that she is sorry and then Maddox knocks him out with magic. When Elena accepts her reward, Isobel bites John to create distraction to allow Katherine to kidnap Elena. Stefan follows "Elena" to the parking lot, then she stabs him and throws him into the bushes.

Meanwhile, Bonnie works with Jeremy and Damon in order to find the spell they will need to gather the power of the witches killed in the massacre. Damon takes them to the site where the witches were burned. Damon knew where it was because he had tried to save Emily, but only because she was the key to getting Katherine back. Inside the house on the site of the massacre, Damon finds that he cannot move and tells Bonnie that if this is a prank it's not funny. His ring then stops working and he begins to burn. He tells Bonnie to help and she closes her eyes and starts muttering a spell. Damon is able to move again and Bonnie tells him that she doesn't think that the witches like him being there. He exits the house. Then Bonnie calls the witches and soon after, she gets a lot of power.

Damon comes home carrying John's body (who is alive thanks to his ring). Stefan tells him that Isobel took the moonstone. Isobel is in a car with Elena and Frank. She calls Katherine to tell her that she is sorry. Then Maddox knocks out Katherine.

Isobel brings Elena to the Grove Hill Cemetery where they stand at her grave. The grave was put there by Elena's grandparents when it became clear to them that the police were never going to find Isobel's body. Isobel receives a phone call from Maddox who tells her that she has finished what Klaus compelled her to do and is free to let Elena go. Then she says to Elena that she is sorry that she was a disappointment to her. She removes her lapis lazuli necklace and burns to death.

Matt tells the sheriff that a vampire killed his sister Vicki. He goes to see Caroline at her house. He demands her to tell him what happened to Vicki and everything about her. After Caroline has told him everything, he tells her that he doesn't want to remember any of it because he doesn't want to look at her and see what she really is. Caroline compels him to forget, but it is later revealed that it was a setup by Sheriff Forbes to find out everything about the vampires. Matt had already secretly drank some vervain before he went to Caroline's house, so when Matt told Caroline to compel him, her compulsion didn't work.

Damon and Stefan search through Isobel's house. After that, they give Elena their house to protect her from vampires. Damon and Stefan figure that they have a new secret weapon- Bonnie, because nobody knows hat she got her powers back.

In the last scene, Katherine awakens in some house. She sees Maddox doing some spell on Alaric. She tries to escape, but is unsuccessful. Then it is revealed that Klaus is now possessing Alaric's body.

Stefan: "Why don't you call Alaric and let him know that his wife just showed up on his girlfriend's doorstep?"

Damon: [to Katherine] "Don't mistake the fact that we haven't set you on fire in your sleep for trust."

Damon: [to Bonnie and Jeremy] "Great, we'll have to put that on our list of things to do today-- harness dead witch power."

Elena: "You screw up everything, John. Everything you touch just falls apart. But, you're the only parent I have left. So, maybe I can learn not to hate you."

Elena [about Isobel]: "If that's what you thought of her, then why did you ever put your trust in her at all?"
John: "Because I was there when she gave birth to you, Elena. I saw how heartbroken she was to give you up. And, because she was the first girl I ever loved. And, when she said she'd help keep you safe, I believed her."

John [about Isobel]: "I always knew that she and Katherine were close, but I never realized that Isobel and her were working against me. Two of the world's most uncaring and selfish vampires, and yet they were genuinely friends."

"Give Me Strength" – Snow Patrol 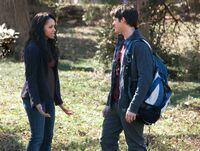 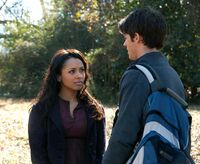 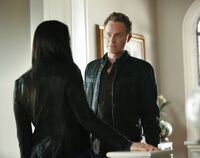 Retrieved from "https://vampirediaries.fandom.com/wiki/Know_Thy_Enemy?oldid=2788771"
Community content is available under CC-BY-SA unless otherwise noted.