STEFAN, DAMON, ALARIC AND ELENA AGAINST TOMB VAMPIRES - When Stefan and Damon make a dangerous new enemy, Stefan suddenly finds himself in a perilous situation. Damon and Elena try to convince Alaric to work with them to help Stefan. Matt is hopeful that his mom, Kelly, may be back to stay. After her car breaks down in a storm, Caroline makes a horrific discovery that shocks everyone in town.

Anna is still at Jeremy's room where Jeremy tries to convince her to turn him but she does not agree with it. Elena knocks the door to ask Jeremy's help on checking all the windows due to the storm and Anna disappears before she opens the door.

Frederick wants to go hunting with Anna but Pearl does not allow him to. While Pearl plans her next trip into town where she will continue her research on how to get their town back, Frederick allies with the rest of the vampires who are all want to take their revenge on the Salvatore brothers and humans now and do not want to wait.

Damon explains Pearl's plan to Stefan and Elena cannot believe that he made a deal with her. Damon leaves and Stefan promises Elena to handle the situation.

Anna and Jeremy meet at the Grill where Jeremy tries once again to convince Anna to turn him. She asks him to keep her secret from everyone and she sees his bracelet with the vervain that Elena gave him. Jeremy offers to give it to her since she likes it so much but she gives it back to him and asks him to keep wearing it. Pearl gets into the Grill to find and take Anna and Anna gets up to walk away from Jeremy sending him a text to explain that her mother walked in. On their way out they run into Mayor Lockwood and Tyler. Mayor asks them not to go out in the storm and invites them to join them for dinner but Pearl declines. She hears his name on her way out and changes her mind coming back.

Meanwhile, Stefan is weakened by the fight with Frederick and Bethanne and goes out for hunting alone. Frederick and the other vampires find him, they stab him in the gut and take him to their house. Damon worries about Stefan not coming back home and not answering his phone and goes to Elena to ask if he is there. He suspects that Stefan has been taken by Pearl's vampires and his suspicions are confirmed when he visits the house and Frederick answers the door. They show him Stefan who is wounded but Damon can't enter the house to help him without invitation.

Damon tells Elena that Stefan is in the house but he cannot get in. Elena wants to go herself but Damon stops her. He knows that they have to save Stefan but does not know how. They go to school to ask Alaric's help since he knows about vampires, has weapons and the ring that protects him. Alaric denies to help them but he accepts when Damon tells him that Pearl can lead him to Isobel.

Meanwhile, the vampires keep torturing Stefan by stringing him up on vervain-laced ropes and stabbing him. Harper shows up and tries to stop them since Pearl would not agree to this but the other vampires tie him up as well and stake him on the legs.

Damon and Alaric make their plan while Elena insists to go into the house with them. Damon refuses and explains her why she cannot get into that house that is, in case she does not know, full of vampires. Elena can drive the car but she has to stay in it while the two of them try to help Stefan.

Alaric knocks on Pearl's door and when Frederick answers he tells him that he needs to use his phone because his car broke down. Frederick lets him in and when Alaric is led to the kitchen, he stakes the vampire who is there and leads Miss Gibbons to the door but she refuses to invite Damon in since she is compelled not to do it. Damon asks if there are any other living people who live in this house and when he is sure that there are not, he breaks her neck and gets in.

Back at the Grill, Pearl tries to get as many details as she can from the Mayor about his family at the dinner. Anna and Jeremy exchange texts from across the room but Pearl notices and asks the Mayor who is the boy. He tells her that his name is Jeremy Gilbert. Pearl follows Anna to the ladies' room and confronts her about Jeremy. She tells her the Gilbert family is the reason she was trapped in the tomb for over a century and asks her to stop seeing him because when he finds out what she is he will turn on her. Anna reveals that Jeremy already knows and Pearl slaps her. Anna walks out of the Grill texting Jeremy: "I'll do it".

Damon keeps looking for Stefan killing some other vampires in the process. Alaric returns to the car but Elena is not there so he goes back to the house knowing that she went there to help Stefan. Elena sneaks into the basement getting herself in trouble before Damon appears to save her. They find Stefan and Harper and they free them. Damon goes to distract Frederick, who already got suspicious that something is going on, while Elena helps Stefan to get out.

Damon fights with Frederick and two other vampires when Alaric shows up to help him. Frederick escapes and Damon searches the house to find him but he is not there. They try to get out to head to the car but a bunch of vampires appear and they return in. Pearl and Anna return home to find them inside. Damon explains what happened before he and Alaric walk out the door, leaving Pearl and Anna behind with all the vampire bodies.

Stefan and Elena make it back to the car but the key is missing. Frederick shows up and starts hitting and stabbing Stefan. He is about to kill him when Elena stabs him in the back. Stefan tells Elena to run but she gives him her wrist to drink from so he can regain his strength. Stefan tries to resist but eventually he drinks and manages to kill Frederick.

In the meantime, Caroline has to drive to a family engagement in the storm and she leaves after she says goodbye to Matt. The main roads are closed so she drives in the backwoods when her car gets stuck in the mud. She has no cell reception so she decides to get out trying to get one and call for help. She falls down and grabs a tree root to steady herself only to discover that it is a human arm.

Matt and Kelly prepare their dinner when the doorbell rings and Caroline is at the door with her mom, Liz. They ask to see Kelly and they inform her, and Matt, that they found Vicki's body. Liz calls the Mayor to let him know. When he tells Tyler they have to go, he tells him about Vicki and Jeremy also hears. Tyler and Jeremy head to Matt's house and Jeremy also calls Elena to tell her.

Elena and Jeremy return home where Jeremy finds Anna waiting on his room. Anna realizes that Jeremy only wanted to turn to find Vicki and she takes off before Jeremy apologizes.

Damon sits next to Alaric at the bar for a drink and tries to have a friend-talk with him but Alaric punches him and leaves. Damon returns home and finds IV blood bags all over the place and Stefan drinking of one.

Anna: "The first rule about vampires: don't believe anything you read."

Elena: "I can't believe you made a deal with her."
Damon: "No, it was more like a helpful exchange of information. It's not like I had a choice. She's scary. Besides, she's gonna help me get Katherine back."
Elena: "Of course. (She laughs sarcastically) Damon gets what he wants as usual, no matter who he hurts in the process."

Damon: "Hunting party?"
Stefan: "That guy did a number on me last night when he stabbed me. I've got to get my strength back up."
Damon: "I have two liters of soccer mom in the fridge... No?"
Stefan: "We'll talk when I get back."
Damon: "Alright, give my regards to the squirrels."

Anna: "Do you even know why we turn other people? It's not to give someone a one-way ticket out of loner-hood, okay? Once, we need someone to do our dirty work; two, revenge; three, boredom... but, you know, that never turns out well. And then, you know, there's the obvious one-- you love someone so much that you would do anything to spend all eternity with them."

Elena: "Damon, now's not the time to be the Lone Ranger."
Damon: "Fine, Elena, you can drive the get-away car. You're not going in the house."
Elena: "You can't stop me. It's Stefan we're talking about here. You don't understand."
Damon: "Oh, I understand, I understand. He's the reason you live, his love lifts you up where you belong. I get it."
Elena: "Can you just not joke around for two seconds?"
Damon: "I can't protect you Elena. I don't know how many vampires there are in there. (He snaps his fingers) That's how long it takes you to get your head ripped off. I have to be able to get in and get out. I can't be distracted with your safety. Or this will end up a bloodbath that none of us walk away from, including Stefan."

Mayor Lockwood: "They found Vicki Donovan."
Tyler: "Are you serious? Where was she?"
Mayor Lockwood: "A storm unearthed the grave off County Road. They just brought her body down to the morgue."
Jeremy: "Wait... she's dead?"

Damon: (To Alaric) "That was fun. Hey, don't look at me like that. I know you hate me. Guess what, everyone hates me. But you can't deny we were badass. (Alaric punches him and walks away, and Damon looks up at the shocked bartender) Happens." 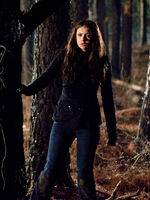 Elena in the woods.

Elena and Damon in the rain.

Frederick being choked by Stefan. 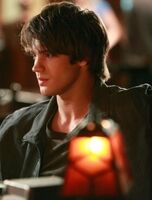 Retrieved from "https://vampirediaries.fandom.com/wiki/Let_The_Right_One_In?oldid=2788155"
Community content is available under CC-BY-SA unless otherwise noted.