HEROES SAVE THE DAY — When things take a dark turn on the twins' 17th birthday, Lizzie is left to make a difficult decision. Meanwhile, Hope takes drastic measures when she and Alaric clash over how to handle an issue involving Josie. Finally, Rafael makes a heartbreaking discovery.[2]

Rafael has visions of running through the woods, seemingly being chased by the Necromancer. He awakens and it is revealed that he is having these visions whilst awake. Alaric holds an assembly in which he announces that both the vampires and werewolves are searching for Josie, but that nobody else should approach her, given she is dangerous. Shortly after, Josie enters, remarking that she isn't lost and wouldn't miss her birthday.

Josie has recruited minions, revealing to MG that a dark-suggestion spell allowed her to manipulate her own "super squad"; Josie remarks that she must ensure her birthday runs accordingly. MG offers Josie a hug, however she begins to siphon the magic from him. He is ultimately saved by Kaleb, who questions Josie's actions whilst Hope watches from afar.

Landon joins Rafael in a field behind the Salvatore Estate, and the two notice a large pool of blood on the floor. Rafael is drawn into another vision in which he is shown holding a large dagger. Landon questions what is going on, and Rafael reveals the history of the visions and that he believes he may have killed someone subconsciously.

Lizzie and Hope talk, with Lizzie revealing that Josie really is in trouble, given she is decorating for their birthday with a black color palette. The two begin formulating a plan to deal with Josie, however are interrupted when Josie abruptly appears behind them. Josie accuses Lizzie of being responsible for "weak Josie's" death, causing Lizzie to plead with Josie that she can change. When Hope questions what Josie is planning for the party, Josie stands and reveals that she and Lizzie will Merge later that night. When Lizzie remarks that the Merge isn't possible — given that they aren't twenty-two — Josie reveals that the Merge can be done at any time, and that the "rules" are merely guidelines. Both Hope and Lizzie are left speechless by the whole revelation as Josie leaves to prepare more. Later, Lizzie makes it clear that she is done trying to fix Josie, despite pleas from both MG and Hope. Hope is able to get Lizzie on board when she explains that she is creating a potion that will create a safe location within her mind. When the Merge is complete — and Lizzie has absorbed Josie — Josie's mind will transfer into Lizzie's and, when they have detoxed Josie's body, they will be free to return Josie's mind back into her body, thus saving the both of them. Lizzie is confused, and questions if the plan only works if Lizzie wins the Merge. Hope confirms this, and Lizzie seems visibly worried, given she is aware she cannot beat Josie given the sheer amount of power she has absorbed.

MG reveals that he will train Lizzie and, in her mind, the two begin a regimented course of fitness and magical training in preparation for the coming Merge. Lizzie remarks that the Merge is a mental battle, therefore fitness training will not help, and that the only way to be certain if she can win is to seek the advice of a witch.

Landon and Rafael talk with Vardemus via astral projection. Vardemus reveals that placing a drop of blood on the "plat en argent" will reveal who the blood belongs to. Landon tells Rafael that they should do the test, given he is certain Rafael did not kill anyone. Despite this, Rafael is adamant that the two do the test, given he needs to be certain who the blood belongs to, even if he did not kill anyone. Moments later, a figure head begins forming from the blood on the plate.

Lizzie speaks with Alyssa Chang, who remarks that she is terrified of the Merge, but not because she is afraid of Josie, but rather she fears hurting Josie. Lizzie tells Alyssa that she doesn't want to make the same mistake again. Alyssa stops the analysis and tells Lizzie that she will lose the Merge because she is fearful of both winning and losing. With this, Lizzie vows to return to her former, selfish self. Josie is revealed to have overheated the entire conversation and snaps Alyssa's neck when she opens the door. Lizzie is shocked by Josie's behavior, and Josie warns that she will begin killing her actual friends if she does not show for the Merge.

Jed brings Alyssa's lifeless body into Alaric's office, where he stands before Kaleb and Hope. He questions if the two will stop Josie, given this is what they do, however Kaleb remarks that there is no stopping Josie. MG arrives moments later revealing that Lizzie left the school in her grief; Hope remarks that the only way to save the school is following through their plan and ensuring Lizzie wins the Merge. With this, MG leaves, and Kaleb reveals that he is formulating a plan-b in case Hope fails — he begins collecting weapons from Alaric's hidden compartment. Hope warns Kaleb that she can't let him hurt Josie and, when he questions how she will stop him, she forces Kaleb into the simulation.

Inside his simulation, Alaric is presented as an Indiana Jones-type character, searching for redemption for his daughters. Kaleb arrives shortly after having been thrown into the simulation by Hope. Kaleb introduces himself to Alaric as Dr. Hawkins, and Alaric holds him at gunpoint. Alaric tells Kaleb that he needs the "elixir" for his daughters, and Kaleb informs him that he will need assistance getting over the wall in front of them.

MG tracks down Lizzie, who is filling up her car with gas at a local station. Lizzie tells MG to stop following her as she is running for her life, and knows she is being selfish, but does not want to die. MG tells Lizzie that nobody else needs to get hurt, and that if Lizzie is running, he is running with her.

Hope interrupts Landon in his room asking for a favor. Landon asks if she knows where Rafael is, but Hope tells him that he said he went out, but she does not know where. Landon tells Hope that it is weird, but does not reveal any issues; Landon mentions what happened in the simulation, citing that there is nothing she can do to push him away — the two are stuck together. Hope tells Landon that she needs to find a way to protect both the school and Josie, but needs his help. With this, Hope and Landon are interrupted by the sound of the Necromancer asking everyone to report to the gym.

In the gym, everyone watches as the Necromancer introduces himself inside a wrestling ring. He announces Josie on one side of the ring, and she enters with her minions seen earlier; she receives negative comments and "boo"s from the audience during her entrance. Alyssa Chang is revealed to be one of Josie and the Necromancer's accomplices, and it becomes clear that the Necromancer has brought Alyssa back from death. In the opposite corner, the Necromancer introduces Lizzie, however is disappointed to see that she doesn't show. Josie takes the microphone announcing that someone must die given her sister did not show. Hope enters dramatically moments later, challenging Josie to a fight.

MG tells Lizzie that he is done playing hero, and that Alyssa died; MG is clearly grieving and upset over the death of Alyssa. Lizzie tells MG that she isn't a hero either, and MG questions why they haven't left the gas station; Lizzie realizes that MG's actual intentions were to convince her to return to the Salvatore School.

Back in the simulation, Alaric is still attempting to scale the wall, whilst Kaleb watches, laughing. Kaleb reveals that his friends are expecting him to return with the elixir too, and that if they work together, they can split the elixir down the middle. Alaric agrees, and his escape word appears, and he becomes self-aware. Alaric tells Kaleb that he knows how the two can escape the simulation.

Kaleb is by the docks when Landon arrives questioning what he is doing. Kaleb brushes him off, but Landon is persistent in reminding him that he will not turn his back on Landon. Rafael replies that there is one thing and, handing him the plate, it becomes clear that Rafael was the one who died by the tree.

Back at the Salvatore School, Hope and Josie are battling. Josie is able to overpower Hope using her dark magic, however Josie tells Hope that the fight is no fun, given she is not fighting back. Hope persists in her attempts to fight through the darkness and reach Josie. Hope is able to get through, but only temporarily, and dark Josie returns almost immediately. Josie levitates Hope in an attempt to throw her onto a broken piece of wood. When she does, however, she is stopped by Lizzie, who holds the levitation and saves Hope's life. Lizzie asks Josie if the plan will work, and Hope tells her that it will, if she wins. MG allows Lizzie to siphon her in order to gain more power; Lizzie kisses MG, but remarks that it was for his benefit, not hers. The two begin the Merge and MG questions if Lizzie can really win, Hope tells MG that if not, they should hope plan-b works.

By the docks, Rafael explains that now he remembers the situation. He reveals that he was attacked when he returned from his father's by the Necromancer, and that Chad killed him. The Necromancer reanimated him, and now, Rafael fears the Necromancer could use him to hurt the people he loves. Landon refuses to allow Rafael to drown himself, and Rafael remarks that whilst he had the time to kill himself, the Necromancer will not allow him to kill himself; he asks Landon to kill him. Landon is hesitant, but finds himself crippled by "plan-b" as Lizzie and Josie finish the Merge — a clear indication that Lizzie lost the Merge.

Alaric and Kaleb arrive back at the Salvatore School and are shocked to see Alyssa, with the Necromancer revealing that he brought back Alyssa. Alaric panics seeing his daughter's unconscious, however Josie wakes and sarcastically remarks that Lizzie's death is one less mouth to feed.

Addressing the school again, Alaric tells the students that he was wrong, and the Josie that they loved is gone; as too is Lizzie. The Necromancer, Josie and Chad watch the situation unfold. In Alaric's office, Lizzie is seen unconscious, and Alaric enters the room asking if his performance was adequate. Lizzie wakes moments later and Hope's plan is revealed to be successful. Lizzie believes that she has won, however MG reveals that they actually carried out plan-b, and the potion Hope created linked her life to Landon's; when Landon came back from the dead, so did Lizzie. MG further explains that when Lizzie and Josie were unconscious, MG sent Hope inside Josie's help in order to find a way to save Josie. It is revealed that Hope is still inside of Josie's mind, and Alaric tells Lizzie that nobody can know that Lizzie is still alive.

The Necromancer tells Josie that it is his turn to get what he wants, and that it is time to raise and control Malivore. Josie questions if the Necromancer wishes to do this, given he would be immortal if he gets his hands on Landon.

Landon and Rafael hug, and when they are hugging, Rafael's eyes turn white and he stabs Landon with the golden arrow.

"All In My Head" – Whethan feat. grandson 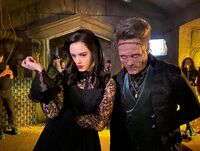 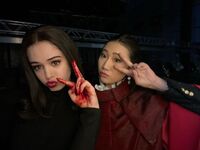 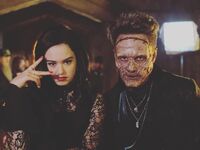 Retrieved from "https://vampirediaries.fandom.com/wiki/Life_Was_So_Much_Easier_When_I_Only_Cared_About_Myself?oldid=2787415"
Community content is available under CC-BY-SA unless otherwise noted.