THE TRUTH CAN BE VERY, VERY DEADLY — Elena demands that Stefan explain the frightening events that have been happening in Mystic Falls. In a string of flashbacks, Stefan explains how his rivalry with Damon began back in the Civil War when they both met the love of their lives, Katherine, the vampire who sired both of them. In the present, Damon impulsively takes control of Vicki's future, and a confused and terrified Vicki runs away. Also, Sheriff Forbes, Mayor Lockwood and Logan and also the others take drastic steps to protect their town.

The episode starts from exactly where the previous episode ended where Elena asks Stefan what he is. Before Stefan gives her an answer, there is a flashback to 1864 and we see Katherine and Stefan meet. Back to 2009, Stefan admits that he is a vampire and Elena is shocked and tries to run away even though Stefan tries to explain. He follows her at her home to promise he won't hurt her and let her know that it was Damon who kills and not him. Elena, though is still freaked out and she asks him to leave.

Meanwhile Damon is at the cemetery trying to cover his tracks after killing Vicki's friends. He calls Stefan asking for his ring while he douses the bodies with alcohol to burn them. Stefan says he'll get his ring back but not right away. They hang up and when he goes to Vicki to douse her too, she wakes up.

The next day Elena meets Stefan at a public place to talk things over. Stefan answers her questions referring to vampires, but she is mad at how he let Damon play with Caroline like that. Stefan agrees that it was not right but it's more dangerous to forbid Damon do something that he wants. He also tells her that years ago, people in Mystic Falls were aware about vampires and he asks her not to tell anyone. Elena is not sure about that but she agrees to give him one day to convince her not to do it.

Sheriff Elizabeth Forbes and Logan find the burnt bodies and they know that a vampire was responsible. Logan informs her that he managed to take the Gilbert watch and now they have to take it to the Mayor. The Mayor gets the watch and fits it into one of the other antiques, he says that it's ready and it hands it back to Logan.

Damon is trapped at the Salvatore Boarding House since he can't get out to the sunlight and he is getting impatient waiting for Stefan to bring him his ring. He brought Vicki at the house who's lying in the couch. He decides to feed her his blood even though he says that he'll regret it. Vicki feels much better after drinking the blood and the two of them have fun partying around the house dancing and drinking. They move the party into Stefan's room and Damon picks up Katherine's picture, and appears upset, and at an unexpected moment, Damon snaps Vicki's neck.

Stefan takes Elena into the woods where his house had been and he continues telling her about his past. While he talks, another flashback with him, Katherine and Damon appears. The two brothers play football and Katherine interrupts and flirts with Stefan, takes the ball and runs making the two brothers chase her. At another scene, Katherine says that she needs a date for the Founder's Ball and both brothers offer themselves with pleasure. Back at the present, Stefan tells Elena that Katherine chose him to escort her at the Founder's Ball. Damon was not mad with her choice, but he doesn't get mad he gets even. Stefan tells Elena that the night he took Katherine to the Ball, Damon was also with her. Back in 1864, where Katherine and Stefan are together in bed and it's revealed that Katherine is a vampire and bites Stefan. The next morning, Stefan is horrified but she compels him not to say anything and she tells Stefan that her, him and Damon will be always together. Stefan tells Elena that Katherine was controlling his mind and compelled both brothers not to tell each other the secret.

Meanwhile Vicki wakes up in transition, unaware what's happened to her. Damon tells her that she is dead since he killed her and she informs her that now she only has to feed on a human to complete the transition. Vicki doesn't believe a thing of what he tells her and she leaves to go to Jeremy. By the time she gets there, her eyes are bothered by the sun and she is hungry. Jeremy thinks she is high and because of her strange behavior, so he calls her brother. Matt gets there but he can't do much to help Vicki, as she has grown extremely agitated by the two boy's questioning her, and when Elena and Stefan arrive. Stefan realizes what is happening and he compels Vicki to calm down. He then explains to Elena and tells her that Vicki has to feed on human blood otherwise she'll die. Jeremy and Vicki are alone in his room but she runs away when she feels the need to bite him. Stefan says he can track her and leaves to find her.

At nightfall, Damon can now get out of the house and goes to Elena's house. He sees that she is afraid of him and he figures that Stefan told her about there secret. He reassures her that he is not there to hurt her but he is looking for Stefan. Since Stefan is not there, he leaves asking Elena to tell Stefan that he is looking for him in case she sees him. Meanwhile, Logan Fell uses the Gilbert Compass searching for vampires.

Stefan finds Vicki crying in the woods. She starts remembering things and now she knows what is happening to her. Stefan promises that he can help her but Logan arrives and shoots him with wooden bullets. Logan is about to stake Stefan but Vicki pushes him away and Damon gets there and bites Logan. He then takes the bullet out of Stefan and he notices that it's wooden realizing that people know about them. He takes his ring back and Vicki feeds on Logan's bite wound, completing the transition, she apologizes to Stefan and runs away into the darkness.

Stefan returns to Elena, explains what happened and he apologizes that he couldn't help Vicki. He vows to teach her not to drink on humans but on animals. Elena promises that she won't tell anyone about him being a vampire but she breaks up with him.

"Weight Of The World" – Editors 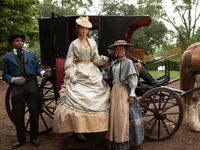 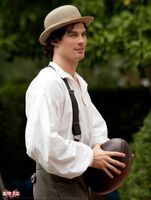 Retrieved from "https://vampirediaries.fandom.com/wiki/Lost_Girls?oldid=2785620"
Community content is available under CC-BY-SA unless otherwise noted.