Lucy Bennett[1] was a witch and a distant cousin of Bonnie Bennett through her mother. She owed Katherine Pierce a life-debt and so helped her obtain the moonstone before helping subdue her. She was killed by Virginia St. John after sealing the Armory's Vault with magic. She later helped Bonnie combat the Maxwell bell's hellfire as a spirit.

Lucy was a member of the Bennett Family.

Not much is known about Lucy's past; however, it is apparent that she was well versed in magic and lore, even knowing about the Sun and the Moon Curse. She had frequent dealings with vampires, remarking how she had let vampires control her in the past. Sometime before the events of the series, Katherine saved her life from unknown circumstances, meaning that she had a debt to be paid.

In Masquerade, Lucy is summoned to Mystic Falls, Virginia by Katherine Pierce. When they meet up, Katherine reveals that Lucy didn't have a choice and that she needed her as backup against the Salvatore brothers later that night to retrieve the moonstone. Lucy deduces that Katherine also wants her to break the Sun and the Moon Curse.

That night, Lucy accompanied Katherine to the Masquerade Ball at the Lockwood Mansion. When she arrived, she briefly met Bonnie, who 'got a weird vibe' from her. Lucy confronts her 'friend', concerned that another Bennett witch was involved, and that things have changed since no one was supposed to know she was involved with Katherine's plan. Eventually, Lucy performed a spell that linked Katherine and her doppelgänger, Elena Gilbert, together, to prevent the Salvatore brothers from being able to kill Katherine. However, after the discovery that the witch she was fighting was, in fact, a Bennett witch, Lucy decided to reverse the spell placed on the doppelgängers and help Bonnie and the Salvatore's defeat Katherine. She cursed the moonstone that Katherine was seeking from the Salvatore's so that when she touched it, she was incapacitated, which allowed the Salvatore brothers to lock Katherine in the tomb. Afterward, Lucy was seen leaving Mystic Falls, having assured her little cousin that they would see each other again soon.

In I Alone, Damon Salvatore went to where Lucy was living off-screen to obtain her Bennett blood so that he and Elena could use it with the Ascendant (and Liv Parker's magical assistance) to rescue Bonnie from the 1994 Prison World. Lucy gave Damon the blood he requested, presumably after learning why it was necessary, but this attempt to bring Bonnie back to the living world was unsuccessful, it wouldn't be for many more episodes that Bonnie ended up finding her way back to her loved ones.

In One Way or Another, Virginia tells Bonnie that, as far as the St. John's were concerned, Lucy was the only known, living witch of the Bennett line, though she had disappeared about four years prior. This was before they found out about Bonnie being resurrected.

In Somebody That I Used to Know, Alex St. John claimed her sister killed Lucy after she sealed the vault under the Armory's basement, imprisoning Yvette, their sister, for four years.

In I Was Feeling Epic, Lucy appears as a spirit alongside Bonnie and other deceased Bennett witches from their ancestral coven to stop hellfire from consuming Mystic Falls, in which they succeeded.

Lucy has been seen to care about her family and witches in general, which is evident when she scolded and betrayed Katherine for not informing her that a witch, and especially a fellow Bennett witch such as Bonnie, would be in attendance at the party where they had planned to steal the moonstone. She is also known to return a debt when she can, as she also mentioned that she only helped Katherine with the linking spell to repay her for saving her life sometime before the Masquerade Ball. She also seems to look out for others, as she made sure to tell Stefan and Damon that Elena was okay and that she would heal quickly since she had Bonnie to help her.

Lucy had almond brown eyes, cocoa brown skin, and long dark hair. She was also tall, with an athletic, fit body and a trendy fashion sense.

As a Bennett witch, Lucy comes from a powerful bloodline of witches. When Bonnie and Lucy first met, she displayed a great knowledge of magic and control over divination, through touching Bonnie learned of the moonstone and showed her cousin that she could be trusted.

She performed a linking spell that would link Elena to Katherine so that anything that happened to Katherine would also happen to Elena. This was Katherine's plan to ensure her survival in case her confrontation with Stefan and Damon ended badly. She then performed the unlinking spell once Katherine was stopped. One of Lucy's most notable spells was the enchantment she placed on the moonstone, as a result when Katherine touched the moonstone she was subdued in mere seconds. Later, it was revealed that Lucy was the witch that sealed the Armory's vault with the powerful Bennett Sealing Spell.

Through unknown means, she and the other Bennett witches returned from Peace to aid Bonnie in the Hellfire Manipulation Spell and to ultimately destroy Hell.

Lucy has the typical weaknesses of a witch. 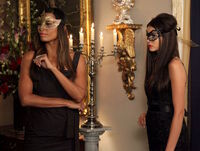