Maddox was a recurring character who first appeared in the seventeenth episode of the second season of The Vampire Diaries. Maddox was a witch and a member of Klaus' trusted inner circle. He first showed up in Mystic Falls when he neutralized Alaric and Katherine Pierce. Then, he managed to put Klaus' spirit in Alaric's body.

Maddox was introduced in Know Thy Enemy. He was revealed to be working with Isobel Flemming, who was compelled by Klaus Mikaelson, in a diabolical plan to capture Katerina Petrova, Alaric Saltzman, and the moonstone. After kidnapping both Alaric and Katherine, Maddox later informed Isobel that her role in the plan was complete, which triggered Klaus' compulsion and forced her to kill herself by removing her daylight amulet and burning up from exposure to the sunlight. Maddox later cast a spell that allowed Klaus' spirit to possess Alaric's body so that he could infiltrate into the Mystic Falls Gang.

In The Last Dance, Maddox advised Klaus on a method to kill Bonnie, as she had harnessed the magic from the Witch Burial Ground; he cast a protection spell on Alaric's body and encouraged Klaus to trick Bonnie into attacking him until she eventually died from overuse of magic.

In Klaus, Maddox, with the help of another witch named Greta Martin, performed a spell that returned Klaus' spirit to his own body, as Klaus believed Alaric's body was too vulnerable.

In The Last Day, both Maddox and Greta were assigned in capturing Caroline, Tyler, and Jules to be sacrificed in the ritual to break Klaus' hybrid curse. To do this, Maddox used magic to telekinetically throw Carol Lockwood down the stairs in order to lure Tyler and Jules back to Mystic Falls. While guarding the prisoners inside the tomb, Maddox and Damon became involved in a violent confrontation, during which Matt arrived and shot Maddox with his rifle, incapacitating him long enough for Damon to snap his neck and kill him.

Maddox, like Greta, was a witch who was extremely loyal to Klaus. He would use his magic to aid in Klaus whenever asked, such as the spell that transferred Klaus into Alaric Saltzman's body, as well as the spell that protected Alaric's body from most physical harm. If Klaus demanded it, Maddox would deliberately hurt or kill innocents, as demonstrated when he attacked Alaric and Carol.

Maddox was a young man with dark hair and blue eyes. He had a tall stature and an athletic build, dressing in a preppy manner and frequently wearing a black coat.

Maddox possessed all the standard powers and abilities of a witch. Since personally worked with Klaus, it can be assumed he was an above average or powerful witch. This was exemplified when he was able to use Pain Infliction on Katherine, a 500+ year old vampire, who was unaffected when Bonnie attempted the same feat previously. Maddox was also knowledgeable about both protection and possession spells.

Maddox possessed the typical weaknesses of a witch. 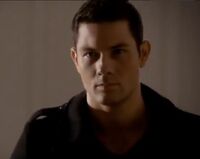 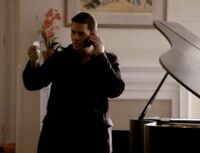 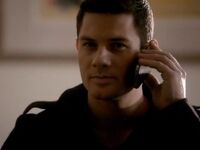