FLASHBACKS TO THE 1960s — Stefan tries to distract Elena from obsessing about the state of her relationship with Damon, while Bonnie does her best to be realistic about how the changes happening on the other side will affect her existence as the Anchor. Damon demands the Traveler knife, forcing Jeremy and Matt to admit it has gone missing. Through flashbacks to election night, 1960, Enzo reveals to Elena, Stefan and Bonnie that he has learned what happened to his long-lost love, Maggie, and then, with the unwilling help of Liv and Luke, things take an ugly turn. Trying to calm Enzo down, Damon intervenes, but his words cause Enzo to make a desperate and dangerous decision that leads to a violent confrontation with Stefan. Finally, Markos enlists Sloan's help in a ritual designed to break an ancient curse against the Travelers. Tyler is forced to play a dangerous part in the ritual, while witnessing the incredible power The Travelers now possess.

Stefan, after Damon told Elena that he doesn't want to see her again, tries to keep Elena busy by helping her study so she won't think of him. Bonnie joins them in the library and Stefan and Elena notice that despite the fact that she might die soon since the Other Side is falling apart, Bonnie is acting like nothing is happening. Their discussion gets interrupted by Enzo who comes wanting revenge against Stefan for killing his true love, Maggie. Stefan denies that he was the one who did it despite Enzo showing him a picture of Maggie as a proof that she was killed by a Ripper. Stefan denies it since during that period, he was not a Ripper but Enzo doesn't believe him.

Damon looks for the Traveler Knife and goes to Matt's place to ask for it. Matt and Jeremy though are also looking for it all over the house and can't find it. They tell Damon that Tyler told them it was in the house but they didn't hear from him since then. Damon puts the pieces together and realizes that Tyler must have been possessed by a Traveler. He calls Enzo for help but Enzo tells him that he is with Stefan and Elena and he is about to kill Stefan because he was the one who murdered Maggie. Damon tries to tell him that this is not possible because Stefan was not a Ripper during the '60s but Enzo doesn't want to hear him.

Enzo uses the help of Liv to cause pain to Elena and Stefan to make him admit his action. Bonnie asks her to stop but she can't because if she doesn't do whatever Enzo wants, he will kill her brother Luke who Enzo keeps hostage. Stefan keeps denying that he had anything to do with Maggie's death so Enzo threatens to kill Bonnie. To save Bonnie's life, Stefan admits that he did kill Maggie. Through flashbacks we see that Stefan and Maggie met and Maggie recognized him as one of the Salvatore Brothers and asked him to tell her where Damon is so she can kill him. Maggie believed that Damon was responsible for Enzo's death in the fire and she wanted revenge for his death.

In the meantime, Damon asks Liz's help to find out more about Maggie and her death. Liz, having the date of the murder, finds the file and brings it to Damon and when Damon sees it he remembers that he was the one who killed Maggie. Through another flashback, we see that Maggie did find Damon and attempted to kill him but Damon stopped her, killed her, and made it look like it was Stefan. Damon didn't know that the woman was Enzo's true love since she didn't give him her name.

Enzo tortures Stefan and Damon gets there in time before he kills him. Damon confesses to Enzo that he was the one who killed Maggie but he didn't know who she was and that at the time he had his emotions' switch turned off so he did many bad things. Enzo doesn't want to hate Damon because he is the only thing he has left and he prefers to turn off his emotions so he won't care about anything, something that he does despite Damon trying to stop him.

Enzo attacks Liv and Damon and Stefan try to stop him but he runs away getting Elena with him. Damon asks Stefan to help Liv while he goes after Enzo believing that he can help him. Stefan gives Liv some of his blood to save her life and then runs after Enzo as well. Enzo wants to kill Elena because he knows that Damon loves and cares about her but Elena fights back, so he snaps her neck. Stefan gets there in time to stop him before he stakes her and the two of them start to fight. Damon finds Elena unconscious and he takes her home so she will be safe. He leaves her on the couch and leaves.

Enzo and Stefan keep fighting and Enzo wants to burn Stefan because he knows that if he does, it will hurt Damon to lose his only brother. Stefan puts his hand into Enzo's chest reaching his heart and tells him that he will kill him because he knows that he won't stop until he kills Damon but he is hesitate to do the final move. Enzo changes his mind about killing Stefan and believes that turning the two brothers against each other will be a better way for revenge against Damon so he pulls himself back leaving Stefan holding his heart and the one responsible for his death; Damon's best friend's death. Stefan decides that it's better not to tell Damon about Enzo's death so he texts him from Enzo's phone that he is leaving town and he goes to find Elena. Elena wakes up and she doesn't know how she got home. Stefan tells her about Enzo and what happened and that he doesn't want Damon to know. He also calls Bonnie to tell her the same and Bonnie agrees. Enzo appears to her to pass to the Other Side and Bonnie hides from Jeremy the fact that the dead man is Enzo.

In the meantime, the Travelers' leader Markos uses Sloan who volunteered for their experiment; they want to see if they can remove magic with the doppelgängers' blood. Markos uses Tyler's blood to turn Sloan into a vampire and then Sloan drinks the doppelgänger blood they have from Stefan and Elena while the rest of the Travelers chant a spell. After a while, they check if the spell worked and if Sloan is no longer a vampire and she is not. Right after though, she dies since the spell brings the person to their last state of being mortal and that was death. Markos announces that they now know that the doppelgänger blood can reverse the spell of someone being a vampire and they can finally defeat the vampires and make the town their home.

The episode ends with Stefan and Damon talking about Enzo. Damon explains to Stefan that while he was captured by Augustine it was Enzo that kept him from hating Stefan when he believed that he didn't care about him and that's why he didn't come to save him. While the two brothers talk, we see Enzo in the room as a ghost and listening to them and seemingly pleased for the vendetta that is about to start between the two brothers.

Enzo: "You ready to talk about what you did to the love of my life? Someone tore her head right off her body."
Stefan: "I had nothing to do with it."

Damon: "The thing is, Stefan was right. He didn't kill Enzo's girl."
Enzo: "What are you talking about?"

Damon: "Oh, I'm so sorry to interrupt... whatever weird ritual you two were doing. But, I just wanted to de-Passenger the great citizens of Mystic Falls using the magical Traveler knife. So, hand it over."
Matt: "It's gonna be a problem..."
Damon: "Five words that make me wanna vamp-toss my keys into your chest cavity. Little Gilbert, help me in the fight against my dark side and elaborate, please."
Jeremy: "We can't find it."
Damon: "As in, you lost it?"
Matt: "As in, it's not here!"
Damon: "You're right. Don't invite me in, because I will kill both of you."

"Be What You Be" – Angus Stone 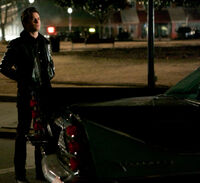