It has been suggested that this article be merged with Marcel Gerard/Relationships. If you disagree, leave a message here.

Sexual, Ex-Fling; Former Allies, Enemies; Marcel killed Sophie's sister (which ruined their relationship), They were both allies against the Harvest.

8 months prior to the series, in New Orleans

The relationship between the Upgraded Original Vampire Marcel Gerard and the Witch Sophie Deveraux.

Eight months prior to the series, before vampires and witches in New Orleans were enemies, Marcel and Sophie had a sexual relationship and only the two of them know about it, until Marcel told Klaus about them. Ever since Sophia's sister did nothing to stop the Harvest from happening, Marcel resented the witches and distanced himself from Sophie. When Sophie's sister risked her life (which ultimately ended it) to perform a spell, Marcel killed Jane-Anne Deveraux. Sophie resented him for that. Marcel also mentioned he killed her sister because he doesn't like kids getting hurt, which Jane-Anne allowed to happen. They unfortunately never resolved their feelings or rekindled their relationship when Sophie was murdered by her own niece.

Eight months prior to the series, when relations between vampires and witches were little less divided, Marcel and Sophie had a friends with benefits relationship; Marcel later describing it to Klaus as a mutual satisfying hook-up.

In Pilot, Marcel found out that Sophie's sister, Jane-Anne Deveraux, is practicing witchcraft which is forbidden in his town. In result, Marcel killed Jane-Anne. Marcel sent two vampires to talk to Sophie so he can find out why Klaus is back in town and is looking for her sister. Sophie told Klaus that Marcel killed who he wants and  do what he wants and after what Marcel did to his sister, Sophie wants to stop Marcel and enlists Klaus' help using the unborn baby of Klaus and Hayley as a blackmail. Sophie tells Elijah that no one can know about their arrangement because if someone finds out, Marcel will retaliate and kill the witches. Sophie also wants Marcel to suffer and told Elijah all he can do is distract Marcel but keep him alive.

In House of the Rising Son, When Rebekah asks Sophie to do a locator spell, she said that she can't do magic because it is punishable by death because it is one of Marcel's rules.

In Sinners and Saints, Marcel revealed to Klaus that he and Sophie had history. 8 months prior to the series, before Marcel banned the witches from using magic, relationships between vampires and witches were much more friendly by its means. When Sophie return to New Orleans, she and Marcel had a sexual relationship and they keep it a secret and only the two of them knows about it. Sophie went to the cemetery where the Harvest will happened and tried to stop it. Few moments later, Marcel came with his nightwalkers and intervenes with the ritual since he knows that Sophie is against the ritual and Father Kieran asks him to intervene because he found out that the witches will sacrifice and slaughter 4 girls to complete the ritual. Marcel save Davina and watched Sophie cries as she mourns because her niece was slit in the throat.

In Après Moi, Le Déluge, Sophie who Elijah previously called arrives at Marcel's place where she explains to them that due to the Harvest's delay, Davina is being torn apart by the power, therefore, she needs to die. Marcel at first disagrees, unlike the originals and then proceeds to kidnap Davina and try to hide her away from all of them he later returns her to the cemetery so Sophie can sacrifice her. After the Harvest fails, Marcel realizes Sophie didn't trick them and then storms off.

In Dance Back from the Grave, Marcel is at Sophie's, waiting for her to show up so he can ask her about the resurrected witches. As he does that, he speaks to Camile and later gets attacked by Papa Tunde. At the end of the episode, he and Klaus talk with Sophie and the three of them begin plotting on how to kill the witches, which gives Marcel hope he can bring back Davina.

In Crescent City, After hearing the news of Monique's resurrection after the fall of Papa Tunde, Marcel goes to see her as well as Sophie where he asks them to help him find the witches so he can kill them and bring back the other three Harvest girls. Sophie at first denies to help him, but Monique manages to convince her. As the three of them go back to the Abattoir, Sophie tells him that she'll help him if he gives her some money. He claims he can protect her, though she quickly answers back by saying that if he could do that, he wouldn't need her help. Soon, he agrees to give her everything she needs to get out of town if she helps him. Due to there being little power left in the earth because of the Harvest's failure, Sophie barely manages to locate the witches, though just as the spell starts working, Klaus comes and kidnaps Monique to use her as leverage. Marcel tries to help her because of his rule of not killing children but Klaus snaps his neck. This marks the last time ever that they encounter each other as Sophie is shortly murdered by Monique when she she tries to take her out of the city.

Marcel: Tell you what, go back to the restaurant, cook some of that famous gumbo, keep those tourist happy.
Sophie: They got every 16 year old girl in our coven dying to be one of the four chosen for this crazy ass ritual.
Marcel: Anything I can do to help?
Sophie: You're a dick. You're always stir it up with the witches.
Marcel (to Klaus about him and Sophie): It was a mutually satisfying hook-up. 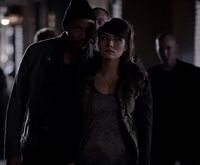 sophie and marcel kissing in the shower..

sarcel making out in the shower..

Retrieved from "https://vampirediaries.fandom.com/wiki/Marcel_and_Sophie?oldid=2780849"
Community content is available under CC-BY-SA unless otherwise noted.