Not much is known about Markos' early history, except that he cast the doppelgänger "prophecy" spell 1,500 years ago, 5-6th century, so he could attract the doppelgängers in order to the use their blood to break the curse placed upon his people, the Travelers.

In While You Were Sleeping, while Markos does not physically appear he is briefly mentioned. His agenda is briefly stated, relating with Stefan and Elena's status as doppelgängers.

In Rescue Me, the Travelers, who ingested Stefan and Elena's doppelgänger blood, sacrifice themselves by fire, while chanting a resurrection spell for Markos. These deceased Travelers then concurrently pass through Bonnie, who then collapses unconscious on the floor of the Whitmore library. Markos then passes through her, as the Anchor, reborn in a new body and walks away.

In Resident Evil, it's revealed he cast the spell that would draw together the doppelgängers, not the universe, so he can use their blood to break the curse that was place upon the travelers. He goes on to explain that if they gather in large groups, and practice magic together, Nature would destroy them in the form of plagues, earthquakes and other disasters. He tells Damon he isn't the enemy and simply wants their blood to lift the curse. Later on, Tyler, who is possessed by a passenger, comes to Markos but he tells Tyler's passenger not to get used to the body for once presumably the curse is done, and they take over Mystic Falls leaving their passenger bodies for their originals. He is then handed the final traveler killing blade by Tyler's passenger in which he throws into a fire, does a spell and destroys it.

In Man on Fire, Markos has Tyler/Julian chained up because they don't know when Tyler will take back control of his body and as a hybrid would be particularly dangerous. He also has Sloan volunteer to drink Tyler's blood. Once she does, he slits her throat and she becomes a vampire. He tests his spell by having the new made vampire Sloan drink the doppelgängers' blood while he and the other Travelers chant the spell. The spell works and she becomes human again, though to her surprise brings her back to the point of her death; via the slit throat. He also says that he won't let vampires in Mystic Falls once they settle down. He then says they need more doppelgänger blood, so he and the Travelers leave in search to find Stefan and Elena.

In What Lies Beneath, The Travelers are on the move again due to the curse placed on them. Angrily, he summons Maria, upset with her for not noticing it was Tyler that was in control of his body the entire time, and not Julian as they thought. He yells at her to locate him and to make Julian's possession over Tyler's body permanent.

Later, he is seen with the rest of the Travelers in a new location, at night, all of them performing a locator spell to find the doppelgängers. Finally, he opens his eyes and reveals to the rest that he has discovered the location of the doppelgängers. At the end of the episode, the Travelers arrive and start chanting an infliction spell which gives Markos the advantage to grab Elena and kidnap her.

In Promised Land, Markos is first seen with Elena, who is chained up to the wall while she is slowly being drained of her blood. She angrily spits into his face to which he just smirks and abruptly, leaves. Later, he arrives into the under-ground caves in which the bodies of the Travelers were supposed to be, but much to his displeasure, he discovers that Damon took all of their bodies which lures Markos over to the boarding house. Once he is there, he explains to Damon what the Travelers' plan is - to unravel all magic leaving behind only pure magic; their magic. Damon, in a lapse of rage, decides to kill Markos only to discover that he is now significantly more powerful, due to channeling the power of every Traveler. Markos then reveals his people has started the spell. Later, as he and Damon talk, Julian makes a plan with Damon to try and kill Markos. As Damon, under the excuse that he wants to show Markos the vine cellar, gives Julian the key, he shortly after jumps on Markos from behind but Markos quickly takes control of the situation as in that same moment, the spell of the Travelers starts spreading and catching up with Damon & Julian, who due to the potential of dying both escape shortly after. Though the Travelers succeeded in casting the spell, it was cut short with the death of Stefan.

In Home, he is first seen placing the Mystic Falls sign exactly at the point of where the Travelers' spell has spread to. In order to punish Julian for his betrayal of his own people, Markos, next to Elizabeth Forbes pushes Julian behind the sign and straight into the spell which undoes all magic. As Julian falls under the spell, Tyler's body is stripped of his hybrid status, turning back into human, where he quickly dies much to Liz's shock. Markos and the Travelers are later seen celebrating at the grill, unaware that Liz planned on getting them all there in one place, in order for Damon's plan to work. After Markos insists for Liz to stay with them, she diverts them by telling him she smells gas. When they go to check it out in the storage room, Liz is quick to attack Markos from behind though he pulls her with him onto the floor as they struggle.

After Damon blows up the grill, it is discovered that with the rest of his people, Markos has died as he is seen going towards Bonnie with the rest of the dead Travelers through the woods. As he passes through Bonnie, he promises that he will just tear his way out of her and the Other Side again. Later, as Bonnie tries to urge Lexi to come back through her, Markos yells from behind, trying to get to Bonnie and pass through her into the living world, though Lexi successfully stops him by throwing him into the darkness, disappearing forever.

Markos was described as a dark but charismatic leader from a faraway land. He was a stoic and intimidating force of nature. He was a leader type who has a "take no prisoners" kind of attitude, without much of a sense of humor about it. Despite being a villain, he was shown to have manners and was civil.

Markos had dark brown eyes and black hair. He also seems to have the early European appearance to him. He was also never seen smiling, but instead had a serious look on all the time. He had a tall stature and an athletic build, and usually wore dark-colored clothing.

Markos was an ancient witch, and possibly one of the more powerful members of the Travelers, seeing as he was their leader.

He had proven himself powerful enough to cast a powerful spell in the 5th century, tying it to the future doppelgängers of Silas and Amara. The spell which was designed to bring them together and thus acting to some extent as a sort of love spell was active for the next fifteen centuries, and was even believed to be the doing of the universe by Qetsiyah, who is one of the greatest witches in history, when in fact, it was Markos' spell at work.

Upon his resurrection in modern times, he was quick to perform a cloaking spell upon himself that hid him from the Spirits and another spell that would cause both Elena and Stefan to see various visions of the lives of doppelgängers past.

Another achievement of his was stripping the newly made vampire Sloan of the magic keeping her alive (vampirism) by a minor version of the purification spell. This gave a hint on what would happen to all vampires should they enter the Travelers' new home. Around the time the Travelers started their Magic Purification Spell, Markos ingested a great amount of doppelgänger blood (a source of massive power for witches) to allow himself to be able to channel the power of all of his Travelers, giving him great power and strength, enough to physically defend himself against vampires.

Markos had the typical weaknesses of a witch. 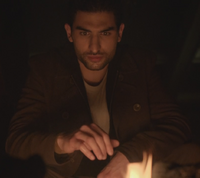 Retrieved from "https://vampirediaries.fandom.com/wiki/Markos?oldid=2780415"
Community content is available under CC-BY-SA unless otherwise noted.