Mason Lockwood was a character who first appeared in the first episode of the second season of The Vampire Diaries. He was a werewolf who was Richard Lockwood's younger brother and Tyler's uncle. A Mystic Falls native, he was estranged from the family before returning to Mystic Falls from Florida in the wake of Richard's death. He had a relationship with Katherine Pierce and worked for her to find and retrieve the moonstone. Unbeknownst to him she was just using him. He was a werewolf, friends with Jules and he also knew other members of her pack. He was killed by Damon Salvatore who ripped his heart out which resulted in instant death.

In Season Three, Mason returns as a ghost and is determined to make Damon apologize for killing him and to help out Tyler.

Mason was a member of the Lockwood Family and the Apisi Werewolf Bloodline.

Before triggering his werewolf gene, Mason Lockwood was a surfer and he lived in an apartment in Florida, where he met a girl named Kathy, aka Katherine. He thought Katherine really liked him, however, Katherine was only using him. Being a Lockwood meant that he was potentially a werewolf. At that time his werewolf curse was dormant. Katherine knew how to trigger it and she did, by compelling his friend Jimmy to attack Mason and to not stop even if it would cost him his life. Jimmy couldn't resist Katherine's compulsion. Mason tackled him to the ground and accidentally killed him in front of the bar. It is likely he knew Katherine was a vampire - werewolves are known to be able to feel when they are around. When he met her, his werewolf heritage was not yet activated, but he was still with her after it was.

Mason returns to town for his brother Richard's funeral, saying that he had not seen Tyler since he was about 10, meaning he's been gone from Mystic Falls for 7+ years. Mason later catches Tyler and Jeremy drinking beer and hints at Jeremy to leave. Afterwards, he drinks with his nephew.

Later, Tyler breaks one of his father's pictures. Enraged, he tries to attack his mom, but Mason comes in and stops him, knocking Tyler down onto the floor. Tyler is confused as to why he got mad so easily, and Mason tells him it was the Lockwood curse.

In Brave New World, Mason goes to the carnival and competes against Tyler and Stefan in an arm wrestling match. Mason later defends Tyler when Carter picks a fight with him, showing his powerful strength by taking down Carter with a simple slap. He jumps really high and Tyler sees his glowing eyes for a second.

In Bad Moon Rising, it's shown that he goes to some underground cell (like a tomb) and ties himself up with chains because he can't control himself when he's in wolf form, which only happens on a full moon.

In Memory Lane, Mason discovers the Salvatore brothers are Vampires after being invited to Jenna's party. When Tyler questions him about the Werewolf curse, he reveals that, in order to transform, he had to kill someone; whether it is purposely or accidentally.

In Kill or Be Killed, Mason tells Liz Forbes about the Salvatores and finally attains the Moonstone from Tyler, delivering it to his "boss" and supposed new girlfriend Katherine Pierce. It's also revealed that he has been working for her for at least the past year after meeting her in Florida's Emerald Coast. It is implied that she compelled his friend Jimmy to pick a fight with him. He accidentally caused a fatal blow to his friend's head, while trying to defend himself. This clearly triggered the curse as Mason's eyes turned yellow.

It is actually Katherine who seeks the moonstone, not Mason, and she wants it to break The Sun and Moon curse.

In Plan B, Damon kidnaps him with the help of Bonnie and tortures him. Later Damon kills Mason by ripping out his heart.

In The Sacrifice, Tyler and Caroline find a video in the cellar that Mason made to record his first transformation.

In Smells Like Teen Spirit, he appears in the Salvatore home and proceeds to attack Damon with delight of being able to exact revenge for his death.

In Ghost World, Mason tortures Damon much in a way that he himself had been tortured but he lets him live. When Bonnie makes all the ghosts visible, Mason goes to Damon and Alaric, and tells them why he came back: he wants to help Tyler and for that, Klaus has to die. Mason says that, among the Lockwood family's dark secrets one of them being a way to kill an Original vampire. Mason and Damon head to the Lockwood cellar where they break into a hidden part of it. Damon still refuses to trust Mason but then Mason saves him from vervain spikes which could have killed Damon. He tells him that he doesn't care about revenge: he wants redemption and he wants to help Tyler. They arrive at a cave that Damon is unable to enter as if he needed to be invited in. Mason finds what they are looking for but before he can tell Damon, he disappears due to the ghosts having been called back. Alaric later discovers that what Mason found was drawings on the wall of the cave and names in Viking script: the names of the Original vampires.

Mason was described as Tyler's "cool" uncle, Mason was sexy and athletic and possessed an easygoing charm. Though he had more control than his nephew, he can "flip in an instant" if crossed. He was in love with Katherine, and would do anything for her. He would die for her. However, he doesn't seem to trust her, as he hid the moonstone at the bottom of a well with vervain. Mason did care about his nephew, Tyler, but his main purpose was always to get the moonstone. Mason was reluctant to reveal to Tyler how to activate the dormant wolf gene, possibly out of fear that he may try to activate or may not want that burden on his nephew.

Mason was an extremely handsome werewolf who was muscular, and had a slim, athletic build to him. He had short, dark brown hair, blue eyes, and a tall stature.

As a wolf, his fur was white and grey, and he had the typical glowing yellow eyes that comes with lycanthropy.

Mason possessed all the standard powers and abilities of a non-Evolved werewolf.

Mason had the typical weaknesses of a non-Evolved werewolf. 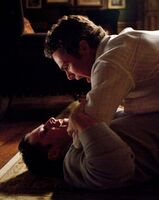 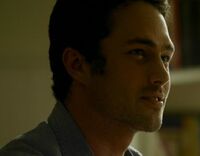 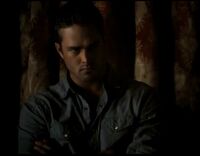 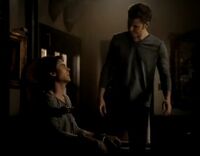 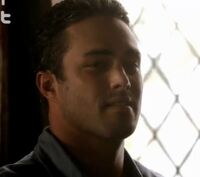