Close Siblings, Love Each Other, Former Allies; Matt tried to help Vicki out with her problem with drugs, They still loved each other even after one of them died, Vicki used to watch over Matt as a ghost before she went to hell (then escaped it) and right before she found peace.

When Matt was born

The brother-sister relationship between the human Matt Donovan and the deceased vampire Vicki Donovan.

Matt Donovan and Vicki Donovan are siblings, but their relationship was rather father and daughter. Vicki was a bad-girl who experimented with drugs, while Matt was a popular football player, and Matt looked at his sister more like a little girl, though he tried his best to look after her in their mother's absence. After the Salvatore brothers returned to Mystic Falls, Vicki was attacked by Damon Salvatore on several occasions; the first incident resulted in Vicki being hospitalized for what doctors believed was an animal attack. While she was in the hospital, Matt, along with Jeremy Gilbert, took care of her. After Damon attacked her again following his escape from his cell in the Salvatore basement, he ultimately healed her with his blood and killed her, turning her into a vampire. After Vicki's transformation, she began to act erratically, leading Matt to believe she was on a drug binge. He tried his best to help her following her return to their house, but Vicki wasn't receptive. The last time they saw each other was in Haunted, when Matt and Vicki attended the Halloween party at the high school. It was there that Vicki became overwhelmed with bloodlust as a result of being a newly-turned vampire, and she attacked Jeremy—and later, Elena—in the parking lot, forcing Stefan to kill her in order to save them. Afterward, the cover story was that Vicki had run away, which is what Matt believed until her body was found by Caroline in the woods in Let The Right One In.

After Jeremy was revived by Bonnie Bennett, the door between the world of the living and the dead was accidentally opened, and Vicki returned as a ghost. Matt discovered that his sister was back and he tried to do everything possible to see her. However, Vicki (with help from the powerful witch Esther) tricked Matt performing a spell that allowed her to physically interact with the living world, though she could only be seen by mediums like Jeremy or Matt. When she tried to kill Elena under Esther's orders, Matt ultimately stepped in to stop her and was forced to accept Vicki's death to prevent more of his loved ones from being harmed.

In Memorial, Matt lit a lantern in the sky in honor of Vicki during the Mystic Falls Gang's memorial service to all the loved ones they had lost in the past two years.

In Stand By Me, Matt and Elena bonded over their dead siblings in the stoner den at the high school, where Matt showed her that Jeremy and Vicki's initials were graffitied on one of the walls. Once Elena has returned home, Matt cries alone in his truck over the loss of his sister and good friend.

In 500 Years of Solitude, all of the ghost loved ones of the Mystic Falls Gang gather in the Salvatore living room to pass on messages to their friends and family through Jeremy and Bonnie. Vicki told Bonnie to tell Matt that she loves him and added that he needed to stop hanging out with Rebekah, which demonstrated that she had continued watching over him from the Other Side.

In Resident Evil, Matt was killed by a Traveler acting as a Passenger in Sheriff Forbes' body, and was temporarily taken to the Other Side until he could reunite his spirit with his body. Once there, he ran into Kol Mikaelson, who informed him that the Other Side was unraveling because of a spell, which allowed the spirits to see each other if they wanted to, and added that the witches on the Other Side were really nervous about it. Matt realized that if he could see Kol, he could see Vicki, and managed to track her down. However, Vicki was more concerned about getting Matt back to his body, because she, too, knew that something was wrong on the Other Side, and wanted to make sure Matt wasn't stuck there. The wind started whipping around them as they ran through the woods, and though Vicki tried to stop them, Matt insisted that he could bring her back with him. The wind started sucking Vicki into a portal, and though Matt tried his best to hold onto her, Vicki reminded him that she was already dead, unlike him, and allowed herself to be sucked into oblivion to save him. Matt was so upset by her loss, he fell to his knees and started to cry until Kol convinced him to go back to his body and warn the rest of his friends about what was happening so they could fix it before the Other Side (and everyone else in it) was destroyed.

In I Was Feeling Epic,

Vicki: You have got no business in the stoner pit.
Matt: I figured you'd feel comfortable here.
Vicki: Touché.
Matt: So what do you mean, that I can help you come back?
Vicki: Right now, I can only come back when you're thinking of me. But, there is a way that I can be free of that.
Matt: How?
Vicki: I know this sounds crazy, but I have help from the Other Side.
Matt: The Other Side?

Vicki: I can be a part of this life again, Matt, instead of being on the other side, all alone. You won't have to be alone anymore, either.
Matt: What do I have to do?

Vicki: Matt, please.
Matt: I can't let you hurt anyone Vicki.
Vicki: I won't, I'll stop. Just please don't make me go.
Matt: I have to. This is wrong. You shouldn't be here.
Vicki: I'm sorry. I just didn't want to be alone anymore.
Matt: Neither did I, but I have to let you go. Goodbye, Vick. 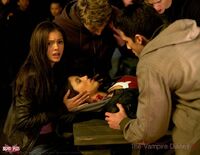 Retrieved from "https://vampirediaries.fandom.com/wiki/Matt_and_Vicki?oldid=2767305"
Community content is available under CC-BY-SA unless otherwise noted.