A NEW DANGER COMES TO TOWN — Elena tries to cope with the extreme highs and lows that are part of becoming a vampire, and Stefan and Damon almost come to blows while arguing about what is best for her. Damon decides to help Elena in his own way and asks her not to tell Stefan. A stranger, Connor Jordan, arrives in town and begins questioning Sheriff Forbes and Carol Lockwood. Connor's actions quickly convince Stefan that they are dealing with a dangerous vampire hunter. Jeremy and Matt are shocked to see a girl they used to know, April, has returned to town and is enrolling at Mystic Falls High. At a town gathering, Elena comes close to losing control until Caroline steps in to help her. Finally, Damon confides his feelings to an unexpected friend.

Stefan tries to help Elena to learn and follow his diet of drinking animal blood. In the morning, Stefan and Elena wake up together in the woods to hunt. Stefan tells Elena to close her eyes so that Stefan can catch the deer and Elena can feed. During a passionate make out session, Elena begins to feel sick and pushes Stefan away. She runs away using her super speed and vomits up the animal blood she just had consumed.

The vampire hunter is investigating the explosion site. He sees the disconnected gas pipe and the Zippo lighter. Elizabeth Forbes asks Damon if he was responsible for the death of the council. He denies it. They are interrupted by Connor.

Jeremy and Matt meet April Young, the daughter of Pastor Young. She used to be good friends with all the main characters, but has been in a boarding school since her mother died... another orphan in Mystic Falls.

Stefan is so happy for Elena's first feeding that she doesn't have the heart to tell him she is not holding the blood down, so she goes to Damon for help. He feeds her blood from his vein.

Tyler and Caroline are interrupted just before some "grief sex". Connor is at the door with questions to Carol Lockwood about the deaths of the Council members. When he shakes hands with Tyler, Tyler's hand burns and Connor shoots him immediately. Tyler manages to escape. All this happens before Caroline manages to get downstairs. Tyler goes to the Salvatores for help. Stefan pulls wooden bullets with strange markings on them from his chest. Just by touching at them, he can tell they would be deadly to any ordinary vampire.

Elena joins Matt in setting up for the memorial service at the church. While they're distributing programs, she spots April, whom she used to babysit. She goes to comfort the girl she hasn't seen since her parents' funeral. When Elena touches April's arm, however, the sensation of the girl's pulse makes her run off to the basement bathroom to puke.

Bonnie is skulking in her house when Stefan comes to visit. He hugs her and shows her the bullet. Just by looking at them, she can tell they are not "magical". Elena has puked blood all over the bathroom and her pretty pink dress. Connor is knocking outside the door while Damon arrives with a clean dress and an excuse. He refuses to shake hands with Connor, claiming he is a Germaphobe. Connor says he is in environmental control. April is on the balcony working on her speech. Connor stabs her in the stomach.

Outside the church, Damon gives Elena a bag of human blood. She gulps greedily, but can't stomach that either. "What's happening?" she asks. Damon hypothesizes that's it's her doppelgänger blood and that she needs to drink from the vein. When the memorial mass starts, the Mayor invites April to speak. When the girl doesn't approach the podium, Elena is the only one who stands up. As she starts to speak, Elena smells April's blood and starts to fang out. Stefan takes her away from the podium. All the vampires have smelled blood, but Damon warns them to not turn around as they are being watched.

Elena can't control herself as she has not fed. Matt offers his blood to feed her and stabilize her, as much as possible during the funeral. Surprisingly she drinks just a bit and manages to control herself. Seeing that Elena isn't holding herself together, Tyler, fully knowing that the hunter will recognize him, takes the stand to speak for Pastor Young. Connor shoots him with a decorated stake. Hell breaks loose. Damon goes after the hunter and Caroline pulls the stake out of Tyler and he is okay. as it missed his heart. Carol Lockwood calls an ambulance to keep appearances.

Damon chases and confronts Connor in the parking lot. Connor is stronger than he looks and is able to hold his own and is about to stake Damon when Stefan announces his presence. Connor gets in his truck and runs. None of the vampires present superspeeds after him.

Stefan punches Damon for sharing blood with Elena. Elena runs up the balcony to help April. The minute she sees her friend sitting in a pool of blood, however, her fangs pop out and she goes in for the kill. Fortunately, just before Elena attacks her, Caroline uses this opportunity to teach her some self control. She tells Elena to compel April to forget that a guy stabbed her and her babysitter tried to kill her at her dad's funeral. Jeremy and Matt are in the Mystic Grill, so is Connor, who notices the bite on Matt's neck. Jeremy on the other hand sees some tattoos on Connor nobody else has seen.

Connor reveals Pastor Young's suicide letter, talking about a "greater evil" that demands sacrifices. Stefan confronts Elena about lying to him and sharing blood with Damon. Stefan calls Elena, Caroline, Damon, Bonnie, Jeremy and Matt to have a little gathering where they remember all the people each of them lost including; Alaric, Jenna, Zach, Lexi, Bill Forbes, Mayor Lockwood, Vicki, Grayson, Miranda and Grams.

Damon refuses to take part and instead, he heads to the graveyard to Alaric's grave, makes a speech about how he misses his friend and leaves the bottle of alcohol on the grave. Alaric's ghost appears, saying he misses Damon, too.

Damon: (to Connor) "What brings you to Mystic Falls? Bible salesman?"

Damon: (to Connor) "We love visitors, and the scenery is to die for. (He gasps in shock) Funeral pun. Too soon. Sorry."

Elena: (during the Town Council's eulogy) "The worst day of loving someone is the day that you... lose them."

Damon: (to Stefan about Connor) "I think the risk will be slightly diminished when I, you know, rip his head off."

Damon: (to Stefan regarding Connor) "You have ten seconds before I go old-fashioned on the new guy."

Elena: (to Stefan) "I feel like I've been crying since the day that my parents died... and my life... is like a never ending funeral."

Stefan: (to Damon about Elena) "She's strong. If we can help her, she can survive."

Damon: "What brings you to Mystic Falls?"
Connor: "I'm part of the cleanup."

Damon: (sing-songs) "Making a big mistake."
Stefan: "No, I'm not. If I can get Elena used to animal blood right out the gates..."
Damon: "You're reaching."
Stefan: "Maybe she would be able to bypass all the things that we went through."
Damon: "Delusional!"
Stefan: "Maybe she actually has a shot at this."
Damon: "Wrong. You're just wrong, Stefan!"
Stefan: "She won't be able to handle it when she hurts someone, Damon. Her compassion is her Achilles heel, and everything is magnified right now."
Damon: "You better hope that she's not a fan of Bambi."

Elena: "Did you set up the explosion that killed the Town Council?"
Damon: "Am I wearing my, 'I blew up the Council,' T-shirt?"

Damon: (to Alaric's headstone) "You know what they are? Children. Like lighting a candle's going to make everything okay, or even saying a prayer. Or pretending Elena's not going to end up just like the rest of us murdering vampires. Stupid, delusional, exasperating little children. And I know what you're going to say: 'It makes them feel better, Damon.' So what? For how long? A minute? A day? What difference does it make? Because in the end, when you lose somebody, every candle, every prayer is not going to make up for the fact that the only thing that you have left is a hole in your life where that somebody that you cared about used to be. And a rock with a birthday carved into it... that I'm pretty sure is wrong. So thanks, friend. Thanks for leaving me here to babysit. Because I should be long gone by now. I didn't get the girl, remember? I'm just stuck here fighting my brother and taking care of the kids. You owe me big."
Alaric: (as a ghost) "I miss you too, buddy." 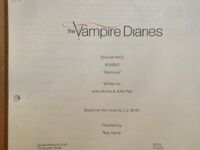 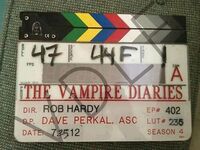 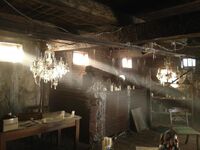 Retrieved from "https://vampirediaries.fandom.com/wiki/Memorial?oldid=2785671"
Community content is available under CC-BY-SA unless otherwise noted.