The Vampire Diaries Wiki
Register
Don't have an account?
Sign In
Advertisement
in: Relationships, Romantic Relationship, Family Relationship,
and 2 more

View source
watch 01:32
She-Hulk Trailer Dropped - The Loop
Do you like this video?
Play Sound

Were Married, Loved each other, Sexual; Former Allies, Former Enemies; Esther chose Mikael over her sister Dahlia (centuries ago), Mikael tried to avenge Esther's death by chasing Klaus and the rest of his children for nearly a thousand years, They had children together, Their relationship deteriorated gradually after Freya's "death" (centuries ago), They shared a tense reunion while Esther was possessing Lenore's body.

Were Married, Former Allies, Former Enemies; Ended (Both are dead)

The relationship between, husband and wife, Mikael and Esther. Mikael and Esther had seven children and after their youngest died in the New World, they turned the rest of their children into vampires. They both have common goals to end vampires. Although Esther wants to rid the world of vampires whereas Mikael just wants to kill Klaus. In The Originals, both are frequently mentioned by their children. However, they became recurring characters during Season Two, before their deaths. Before their deaths, Esther projecting herself in Lenore's body, another New Orleans witch, and reunited herself with Mikael after many years. During this reunion, they began to argue the fate of their children, which left Mikael infuriated and Esther seeing how hopeless Mikael is in trying to save her family.

Mikael was a Viking warrior and a wealthy land owner who met Esther, a witch, when his people killed everyone in her village except for Dahlia and herself. They met and married in the Kingdom of Norway in the Old World (Europe). Mikael promised Esther he would protect her, and she stopped using magic. Eventually Mikael and Esther had 7 children. It was believed that their firstborn, Freya Mikaelson was killed by a plague that hit their home town. In truth, Freya was the price Esther paid to her sister Dahlia for a fertility spell performed on Esther, which required the firstborns from all generations of Esther's bloodline be given to Dahlia. Esther told Mikael Freya died of plague, and the family decided to flee their home. Esther's mentor, Ayana, heard of a land in the New World where all were healthy, blessed with speed and strength. This became Esther and Mikael's home, where the future Mystic Falls is located.

All was well until their youngest child, Henrik was killed by a werewolf. Mikael begged Esther to find a way to protect the rest of their children. Esther then made a spell that made Mikael and their children Original Vampires. Mikael discovered that Esther had been unfaithful and had a son with another man, named Ansel, when Niklaus made his first human kill and activated his werewolf gene. Esther was later killed by Klaus and Mikael was framed for the act. The siblings fled from Mikael in fear.

Despite Mikael's temper, they genuinely loved one another, even after learning of her affair, and her death drove his quest for revenge for 1,000 years trying to hunt and kill Klaus.

Both Esther and Mikael have been resurrected, returning from The Other Side, but by different means; Esther's possession of a revived Harvest girl named Cassie and Mikael being brought back by the witch, Davina.

In Wheel Inside the Wheel, Klaus revealed to Esther that Mikael had returned with the help of Davina, much to her shock.

In The Map of Moments, Esther found Mikael slaughtering werewolves in the woods, searching for Ansel, Klaus's father who she had also resurrected for her own purposes. Mikael was furious that she would bring back the man she cheated on him with over him. Esther told him he could stop his search since Klaus had already killed Ansel. She then proposed an alliance with Mikael if she promised him that he'd be allowed to kill Klaus. Mikael accepted the deal and became his wife's ally, rescuing Finn from being Klaus's captive on her orders.

In Gonna Set Your Flag On Fire, after Esther went missing, Finn used sacrificial magic to draw power from Mikael, neutralizing him in the process. Soon after, when he discovered that Klaus had made Esther into a vampire, Finn furiously did the same spell on her, placing his neutralized parents beside one another. Finn told them that he intended to destroy his younger siblings, since Mikael and Esther had ruined the family by having more children after Freya and Finn.

Esther: "Relax, Mikael. Niklaus means well."
Mikael: "That is precisely my problem."
Esther: "You've made your point, Mikael!"
Mikael: "If she will not protect our family, then it is in your hands alone my love."

Davina: "It says I need to channel power from a nexus vorti?"
Mikael: (laughs) "Ah, yes. My wife, Esther, always did love to dress things up a bit. It's fancy witch-speak."

--From a Cradle to a Grave

Klaus: "The truth is, you're not better than Mikael, and like him you seem to have crawled back from the grave simply to ruin your children."

(Esther's eyes widen in shock, and he realizes this is news to her)

Klaus: (amused) "Oh! You didn't know! Yes, the Destroyer has risen, brought back to kill me by the witch Davina. Surely Kol has revealed everything to you? (Esther's face remains blank) Or, is Mother's loyal little boot-licker not quite so loyal, after all?"

--Wheel Inside the Wheel

Esther: "If Mikael has returned, we will need to deal with him."
Klaus: (laughs) "We? Is that a joke? Am I to forego centuries of hatred for my evil mother in order to join her in besting the very demon she herself allowed to raise me?"
Esther: (sighs) "I am not evil, Niklaus. I am your salvation. And Mikael? He was not always a demon."
-- Wheel Inside the Wheel

Esther: "Should Mikael return with the intent to harm you, I will strike him down myself."

Esther: "After Freya died, Mikael was inconsolable. Compelled by his grief, we were forced to pack our things and set across the seas. Eventually, his despair would drive us apart, and that's when I saw him for the first time -- your father. I'd never seen a man like him. Powerful, yet wise, but loved by his people. And -- because Mikael had chosen to leave me alone in his grief, shunning me from his life -- I found myself drawn to another."

Esther: "I knew if Mikael had learned of my infidelity, he would've destroyed us in his rage."
-- Wheel Inside the Wheel

Esther: "When I learned I was with child, I went back to Mikael. I told him I was having his baby. He showed no joy, but neither did he suspect the truth."

Esther: "You're making a mess of my werewolf sentries, Mikael."
Mikael: (shocked) "And you're up to your old tricks."

Mikael: "Esther. I've missed you, wife. Have you missed me?"
Esther: (sighs impatiently) "As much as you've missed me, I imagine."
Mikael: "That would explain why you brought your lover back from the Other Side without so much as a thought of me. I will slaughter every single wolf I see until I am taken to the dog you saw fit to bring back from the dead!"
Esther: "You can stop looking for Ansel. Klaus killed him. Klaus may not be your blood, but he certainly has picked up a few things from you along the way--"
Mikael: (enraged) "DO NOT MENTION THE BASTARD SON!"
Esther: (amused) "--Resolution through violence. You are nothing if not consistent."

(Mikael glares at her furiously)

Esther: "Go ahead. Strike me. I imagine you've been waiting a thousand years to do so."

(Mikael lunges for her, but she vanishes, revealing that Esther was only in the Bayou in the form of an astral projection. In reality, she is in the lycée, and she laughs at Mikael's predictability)

(Mikael growls and turns as Esther reappears behind him)

Esther: "Now that you've gotten that out your system, we have things to discuss about our children."

Esther: "If only you'd taken my offer when it was still mine to give! Unfortunately, you've left me no choice but to make a... deal... with Mikael."
Rebekah: (horrified) "Mikael?"

Esther: "When Finn and Kol went missing, I needed a new ally."

(She looks at Klaus with a furious expression)

Esther: "All he wanted was the right to kill you."

-- The Map of Moments

Mikael to Finn: "--Esther's mistake was believing there was anything left in your siblings to save."

Finn to Mikael and Esther: "We were a family once. I can remember the love between you, how happy you were that I was your son. And I remember the day that we lost our Freya, and how we never got that happiness back. I remember it all. You should have stopped there. Instead, you had them, the monsters you call children. And for that, you will all pay."

-- Gonna Set Your Flag On Fire

Dahlia: (unhappily) "You've been with Mikael."
Esther: (giggles) "We were only talking."

Esther to Dahlia: "Mikael will protect me now, sister! We plan to marry... and have a family."

Esther to Dahlia: "I love him."

-- City Beneath The Sea 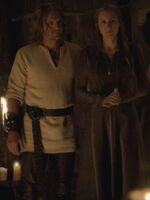