It has been suggested that this article be merged with Mikael/Relationshps. If you disagree, leave a message here.

Enemies, Former Allies; Katherine conspired against Mikael with the rest of the Mystic Falls Gang, Katherine betrayed Mikael and helped Klaus kill him.

The relationship between the Original Vampire, Mikael and the cured Vampire/Witch doppelgänger Katherine Pierce.

Katherine first saw Mikael in 1920s and 90 years later she met with him when trying to awake him up from his long deep sleep. Mikael ends his conversion with Katherine when draining her off her blood. Katherine later plays as Elena to fool both Klaus and Mikael: once Mikael stabbed her, she threw Wolfsbane at the hybrids and Klaus killed him.

In the 1920s after Klaus had fled Chicago, Mikael came up front as a Police officer and asked Stefan Salvatore if he had seen those two persons at the drawings. Katherine was there and watched him ask Stefan of it, after he saw that Stefan had been compelled he left.

In The Reckoning, Katherine and Jeremy Gilbert find the location of Mikael, in a cemetery where Anna said he'll be. Katherine opens his tomb and Mikael's eyes opens. Katherine tries wake him up for 3 days with no success, once she was able to wake Mikael, he told her to get the dead body away from him and then falls asleep. Mikael then wakes up later and apologizes to Katherine for yelling at her and tells her he has denied himself human blood for as long as he can remember. When Katherine asks him what he eats, Mikael responds by viciously grabbing and feeding on the vampire.

Mikael: "Get it away from me!" 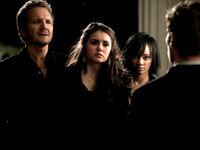 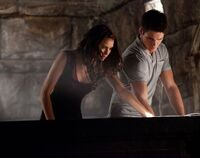 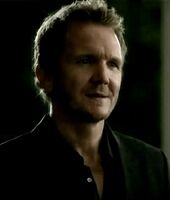 place where Mikael was kept

Retrieved from "https://vampirediaries.fandom.com/wiki/Mikael_and_Katherine?oldid=2778605"
Community content is available under CC-BY-SA unless otherwise noted.