The Vampire Diaries Wiki
Register
Don't have an account?
Sign In
Advertisement
in: Powers, Featured Articles, Original Vampires,
and 4 more

View source
watch 01:54
Obi-Wan Finale - The Loop
Do you like this video?
Play Sound

Mind Compulsion is an ability of immortals, Original vampires, vampires and hybrids to control the mind of another simply through eye contact. Witches and sirens can also use this power though spells and physical touch, respectively, to facilitate a similar action. Thus far each species have been shown to have the ability to erase the victim's memories or even alter them to the point where something is completely different about them.

Compelled beings usually follow the instructions given to them by the vampire who compelled them to the best of their ability, sometimes even those that would otherwise be beyond their "normal" capacity (i.e. being forced to forget a very recent and otherwise unforgettable experience, cause them to develop new skills, and even create new personalities). Needless to say, this ability plays a vital role in keeping the existence of vampires (and by extension, other supernatural races) hidden. While most vampires use compulsion with verbal commands, this is not heeded as a necessity, as in one such instance Damon was able to compel Caroline with eye contact alone. However, this method of compulsion has not been used since. Silas however seems to easily do these feats without eye contact or verbal commands when he wants, and can even get into the minds of the Original vampires.

Species who can use this ability

All non-Original vampires possess the ability to compel humans. They cannot compel other supernatural creatures such as werewolves, however. Most new vampires struggle to compel humans initially and it can take practice for them to master the skill. The length of time taken for a vampire to learn the skill, however, differs.

Vampires who solely drink animal blood may struggle with their compulsion due to their weaker state. On numerous occasions Stefan found it difficult to maintain his compulsion successfully due to his strict animal blood diet.

Due to their vampire side Hybrids have the same exact powers of compulsion of a non-Original vampire. That extends to all hybrids, but only those who are half vampire.

Original Vampires have the same powers of compulsion as any vampire however they can compel any non original vampire so long if the vampire is not on vervain. They cannot compel each other though.

Immortals are the strongest creatures on both shows mentally. They can appear as anyone and can compel without eye contact and even if the target is on vervain. Also they can compel a mass of people at once. They can inflict immense mental pain on targets such as when Silas convinced Klaus he was stabbed by the White Oak Stake.

Witches are able to achieve effects similar to compulsion through magic. The witch Maddox on one instance, controlled the actions of Carol Lockwood including what she spoke, making her mimic his actions like a puppet. After he was done, she did not understand why she did what she did. Several spells have also been used to make people forget, fall under a suggestible trance state and give false visions. Davina Claire once demonstrated the ability removing compulsion, however the process is extremely painful.

Sirens, like Immortals, are capable of some of the most potent forms of mind control and thus far, no means of removal have been demonstrated. Sirens are able to enter the minds of other people through Telepathy, allowing them to read their thoughts or access and alter their victim's memories, and to an extent their state of conscious and personality. Unlike an immortal's mind compulsion, a siren's victim is fully aware of their presence within their mind. This interaction creates a psychic bond between them, such that the siren can maintain a constant presence from within. This bond also serves to keep their servants close as should they stray too far the victims will be struck with psychic pain and suffer hemorrhages. Sirens initiate their mind control through use of their psychically enchanted voices at a baser level, with their control being as such that those whom have been 'sirened' would even readily set themselves on fire and end their lives. They have also been shown to be able to siren almost a dozen people at a time, seen when Seline used her power to siren the customers of a diner. Interestingly, vampiric servants have displayed the ability to provide some form of resistance to a siren's ability to penetrate the mind and manipulate the subconscious, but not from their control over them. 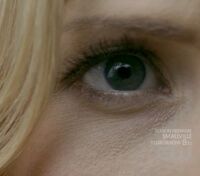